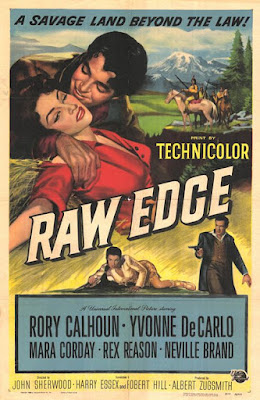 I learn a lot from my readers, and I much enjoy it when they leave comments. Reader John Knight, commenting on my recent review of a Rory Calhoun Western, Ride Out for Revenge, put me onto other good Calhoun Westerns, mentioning in particular “the weird and wacky anti-Feminist Western RAW EDGE.”


Actually, I’m not sure how anti-feminist the movie is, as we shall shortly see. But John went on to say that Raw Edge “is possibly the most anachronistic Western ever. Herbert Rudley turns 1840's Oregon into a medieval fiefdom whereby any ‘unattached’ woman becomes the ‘property’ of the first man to claim her. With the likes of Neville Brand, Emile Meyer and Robert Wilke slugging it out, no Western gal ever had it so bad.”


So that sets up the plot well. John added that the “Film is too dumb to offend and at least the scenery is nice - should look great on Blu-Ray. It’s an Albert Zugsmith production-you have been warned.” So those were useful and interesting comments. 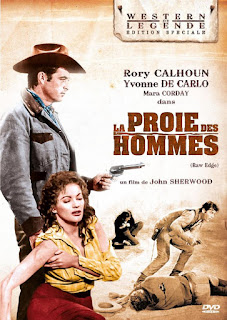 Well, I got the DVD (on the French Sidonis brand, which has annoying subtitles that you can’t turn off and some rather waffly and superficial commentary by Patrick Brion, but the picture quality is very good) and watched it. And in many ways I see what John means. But read the following and watch the movie yourself and see if you agree!


The picture was directed by John Sherwood, which is already a plus because Sherwood had learned his Western craft as assistant director under Anthony Mann on Bend of the River and The Far Country, Hugo Fregonese on Saddle Tramp, Rudolph Maté on The Mississippi Gambler and The Rawhide Years and John Sturges on Backlash. That's quite a list of mentors. He himself directed Yvonne de Carlo in Calamity Jane and Sam Bass (not a great credit to him, admittedly) and Maureen O’Hara and Macdonald Carey in Comanche Territory. Yup, he knew what he was doing. The direction of Raw Edge is skillful and technically very good.


The writing of the curious plot was by Harry Essex and Robert Hill from a story by William Kozlenko and James Benson Nablo. These were not names I knew but Essex had worked on the screenplay of three B-Westerns before Raw Edge and would later contribute to The Sons of Katie Elder; as for Hill, Kozlenko and Nablo, this was their only Western. So the writing team were pretty well newbies. But they had a quirky and interesting story to work with. 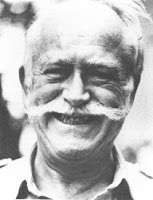 As for John’s red flag on producer Albert Zugsmith (right), he was known for such mighty epics as Sex Kittens Go to College, which doubtless you have seen. Founding newspaper editor, sharp lawyer, band publicist then Hollywood producer, he specialized in salacious B-movies. He only produced five Westerns, all B, two of them with Calhoun.


DP Maury Gertsman shot 28 Westerns for Universal between 1947 and 1967, mostly what you might call quality B-pictures with the likes of Jeff Chandler, Audie Murphy and Joel McCrea in the leads. Universal did not stint on color or locations and many of their 50s Westerns, including Raw Edge, are visually attractive. The ‘Oregon’ of the setting was California but the locations chosen did very well for Oregon. The Technicolor of the modern print is bright and high-quality.


So you see we’re not talking ultra-low-budget B-movies here. 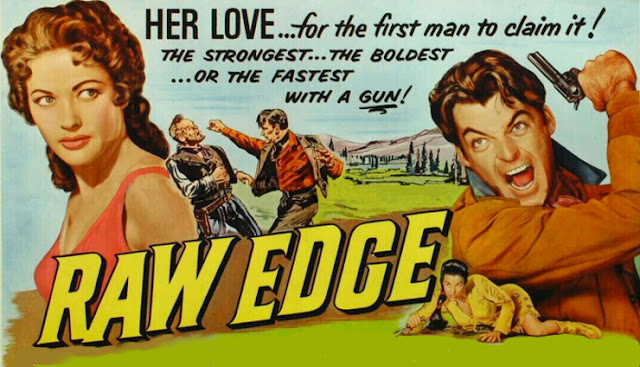 It kicks off with a bad ballad under the bright turquoise credits, as 50s Westerns were wont to do, but we forgive the songwriter, Terry Gilkyson, because he also wrote Bare Necessities for The Jungle Book, which may just possibly be the best song ever written in the history of music, eat your heart out, Schubert.


The top-billed names in the credits don’t exactly fill you with confidence (apart from Calhoun): Yvonne De Carlo and Mara Corday. Oh dear. But then your eye scans the ‘also starring’ list and joy, we see Neville Brand, Emile Meyer and Robert J Wilke, among other old friends. Excellent. Always enjoyable Western character actors, those - especially as bad guys. Rex Reason is also there, as a smooth gambler.


The patriarch Montgomery (Herbert Rudley) who has established the disgusting local law that an unmarried woman may be claimed as a chattel by the first man to see her, has a glam wife, Hannah (De Carlo), first seen with a daring glimpse of ankle and leered over by Neville. Emile is Neville’s dad and just as full of lust. (Actually Emile was only ten years older than Neville but anyway). Hannah is discreetly raped in a stable. Can you be discreetly raped? Well, you could in 50s movies, with much done in shadows and much suggested. Odds are that it was Neville, Emile or Bob, but we don’t see. Anyway, they blame young Dan Kirby (John Gavin, later Destry on TV, later still Ronald Reagan’s ambassador to Mexico, as John Gilmore) and, as was the way in Westerns, hastily hang him.

Even while the lynching is proceeding, the lustful men are leering at his soon-to-be widow, and Hannah tries, unsuccessfully, to whisk her away to her people (for you might think it’s Mara Corday in half a ton of make-up but she’s actually Paca, Indian maid). It’s all pretty creepy. Probably the creepiest leerer, though, better even than Neville Brand, is Robert J Wilke, who manages to claim her, though he has to shoot a rival (sword-and-sandal star Ed Fury) to do it.

Bob Wilke. What a sneer.
As a result of these shenanigans the Indians recall all their people to the village. You should see the horror of Hannah, suddenly left without servants. Whatever will she do? She might have to cook herself!


That’s when ex-Ranger Tex Kirby arrives (he’d been fighting with Sam H at San Jacinto) and finds only the hanging boots of his brother. Any viewer of Westerns knows that it’s going to be hard times for the townsfolk that hanged him. Actually, though, Calhoun does well as the thoughtful revenger.

Uh-oh
When patriarch Montgomery is killed by the Indians, the boot is suddenly on the other foot, and Yvonne is fair game under the Montgomerys’ own law. Hoist with her own petard, you might say. Now the men (Neville and Emile to the fore) are after her. As reader John said, a Western gal never had it so bad. You sense, though, that it will be Rory to the rescue.


The town is named Twin Peaks, which was to become quite amusing. Though we are in 1840s Oregon, they all wear Stetsons (invented in the 1860s) and have Colt Peacemakers (1870s). But never mind.


There’s plenty of action before the bad guys get their come-uppance.

Yvonne 'n' Mara
My above-mentioned doubts about the male chauvinism of the piece concern the fact that the law is so obviously vile, and leads to such cruelty and bloodshed, and is finally vanquished, so that the movie ends up being a pro-woman statement. Probably not Mr. Zugsmith’s intention, but that’s the way I see it.


At any rate, John was right: it’s a curious, oddball Western. And I think I am slowly revising (upwards) my opinion of Rory Calhoun. He was a better Western actor than I have previously given him credit for.