There is a genre of movie comedies which relies on the gag of lots of old-timers getting back together, with much humorous bickering and badinage, comically demonstrating their frailties and unsuitability for a tough task, then showing up the youthful pretenders: when the going gets tough, the oldies get going, that kind of thing. Space Cowboys was a recent example. These pictures appeal to an old-fogey audience that has fond memories of the movies of older (or former) stars and wallows in nostalgia as they return to the screen. In Western vein, such a picture was The Over the Hill Gang (1969) and its sequel the following year. And in fact Once Upon a Texas Train is a remake of that geriatric outing. Yes, TV movies are now remaking TV movies. 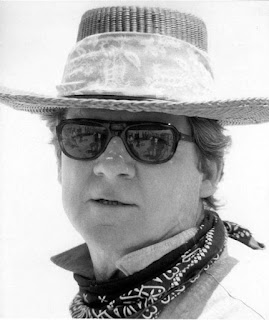 The good news is that it was produced, written and directed by Burt Kennedy (left). Now it is true that Mr. Kennedy was responsible for a couple of less-than-wonderful Westerns (such as The Canadians or Return of the Magnificent Seven) but he deserves eternal praise for penning those Randolph Scott/Budd Boetticher B-Westerns at the end of the 50s, which were outstanding. I also liked his Clint Walker ones, Fort Dobbs and Yellowstone Kelly. He did have a particular penchant for the comic, and he handled comedy Westerns well. That’s not always easy to do but Kennedy managed to convey a fondness and respect for the genre which not all parodies did. Personally, I love his Support Your Local movies with James Garner, and I also think The Rounders charming and enjoyable. All in all, I’m a bit of a Kennedy fan. 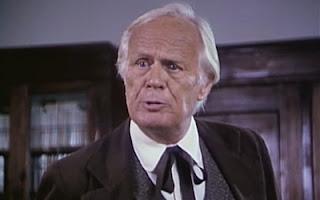 Well, there are two groups of oldies, roughly segregated into good guys and bad guys but they are all pals deep down and we sense they will end the movie shoulder to shoulder, which they duly do. Governor (presumably Texas governor) Kevin McCarthy instructs retired Texas Ranger captain Richard Widmark (right) to get his men together and round up the outlaw Willie Nelson and his gang. Willie has just been released after twenty years in the pen for a failed train robbery (which we see in the opening scene) and six hours later dynamites a bank. Widmark is cross because he got Willie released on parole in the first place and this is how he is repaid!

So he sends a coded telegram, Brazos, to his former Rangers and we are introduced to these one by one: Sergeant Chuck Connors is seen in an old folks home vainly trying to teach Hank Worden (left), oddly billed as Hank Warden, to draw on a man. There’s a subtle in-joke about Hank’s rocking chair. Gentleman George Asque is a roguish, bearded and portly Stuart Whitman, playing with gusto. The scout is portly (well, pointless to repeat; they are all portly) Jack Elam, equally bearded, but he has no horse and uses a bicycle, and his vision would be scorned as inadequate by any passing bat. He does get to do the old Indian joke, though, with his ear to the ground. His long-suffering brother is Harry Carey Jr. but he doesn't go on the mission. I guess he's not an ex-Ranger.


On the other side, Willie’s gang includes Dub Taylor, getaway driver (who crashes the wagon), gunman Gene Evans (who grabs the wrong end of his Winchester), gambler Ken Curtis (who has almost nothing to say; he was near the end of his life and I wonder if he was well), and nitro ‘expert’ Royal Dano (as amusingly lugubrious as ever). 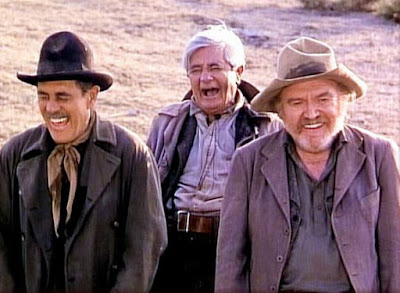 They were obviously having fun
Oh, and the dame the leaders of both parties love is Angie Dickinson.


So you see the names are there alright. Some of the great Western character actors. 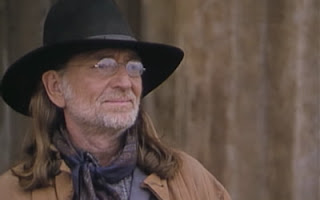 Willie Nelson. Yes, well.
Willie got top billing. Unfortunately, as we know, as an actor Willie makes a great singer. Still, there he is, in his long hair and with his gravelly voice. He leads the singing in one scene. Actually, Willie is an even worse dancer than he is an actor. There’s a flashback scene of a ball when he and Dick in Confederate officers’ uniforms are dancing with Angie. Dick is no better, mind. 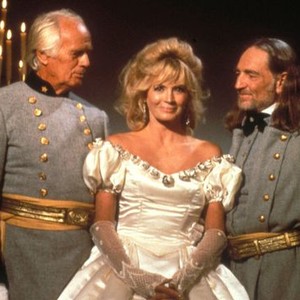 They both lover her. Whom will she choose?
There are some good Burt Kennedy lines. I liked


And while their first reaction is to mock the geriatric gunfighters, one of the young-punk outlaws reminds the others that “those old men got that way by stayin’ alive.”


Yes, there are four young-punk outlaws who try to take Willie’s gold away and keep it for themselves. This is naughty; outlaws are supposed to rob their own banks, apparently. I hadn’t heard of any of these outlaws (Shaun Cassidy, Jeb Stuart Adams, David Michael O’Neill and John Calkins; doubtless they will be known to younger viewers) but they are OK, I guess. They aren’t very good outlaws, though, and come the final showdown they look a bit scared. Well, by then Chuck’s Rangers and Willie’s outlaws have united so there are nine aged but experienced gunmen, with an arsenal of rifles, a shotgun and several .45s, to walk down on but four callow youths. No wonder they were scared. But they needn’t have worried too much: it’s a family movie and so they are only wounded at the end.


The train of the title is a one-car affair but still, it’s a train. Where earlier Westerns used trains with abandon, even crashing them (Denver & Rio Grande even crashed two, in a head on collision) Western trains became increasingly rare, and costly, and so it’s nice to see one in a TV movie.


It’s all very Arizona for Texas, being shot round Old Tucson with loads of saguaros, and some scenes in California and Nevada. Never mind. It’s ‘Western’.


Well, it’s all harmless fun. Who gets Angie in the end? Ah, that would be telling.