Fred croons on the range

In 1939 the big studios decided that Westerns weren’t just juvenile programmers; they could be big box-office A-pictures for adults too. Stagecoach came out that year with United Artists, as did Fox’s Jesse James, Universal’s Destry Rides Again and Warner Brothers’ Dodge City. And they were big hits. But that didn’t mean that the sixty-minute  B-Western disappeared, far from it. It was alive and well in countless movie theaters in the US and throughout the big wide world.


The singing cowboy was a staple of such fare and of course we think first of Gene Autry, Roy Rogers and Tex Ritter but there many others. Fred Scott, for example. 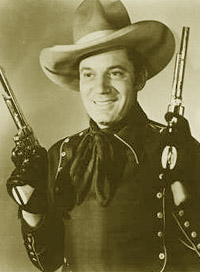 Fred Leedon Scott (1902 – 1991) was a genuine singer if not a genuine cowboy. He had been resident baritone at the San Francisco Opera. But he got into movies with a small part in a Harry Carey oater and from 1936 to ’42 led in fourteen Westerns of his own (sometimes produced by Stan Laurel) for the Poverty Row outfit Spectrum Pictures. Known as The Silvery-Voiced Buckaroo, he galloped over the plains on his horse White King, pausing occasionally to sing a song, romance a girl (chastely, of course) or thwart a villain. Seen now, he was, frankly, a very wooden actor and his pictures were rather clunky, but the undemanding and probably juvenile audiences didn't seem to mind. He did have a certain charm and you could do worse than watch a Fred Scott oater. He retired from movies to go into business. He said, “I don't ride anymore. I have a deal with horses - I don't get on them and they don't sell real estate.”


In Old Montana starts with a sonorous and rather long on-screen text:


When the links in the chain of States that made up the great United States were forged, there were many conflicts, dramatic and spectacular, that often threatened the prosperity of the frontier and the economic structure of the whole nation. Such was the war that broke out in Montana in 1860 between the cattle barons and the sheepherders. The cattlemen had priority and also claimed sheep polluted the land and streams, cropping the grass so short the grazing land was ruined for years. The sheepmen claimed that raising sheep was more profitable and that "the spread" was Government land and they had as much right to it as anyone else. The series of events chronicles here took place in the Lobo Valley just below the fertile grazing lands of the Powder River Basin. Although frankly a Western story, with fictitious characters, each one originally had its counterpart in fact.


Yup, it’s a cattlemen vs. sheepherders plot. We are in the Powder River country, 1880 – though there’s little specifically Montana about the story, which could have been set anywhere in the generic ‘West’. But the Montana setting gave Fred a chance to sing the title song. 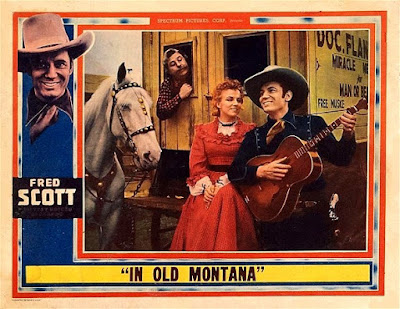 Fred is an Army officer sent in plain clothes (well, not very plain; rather dudish duds if the truth be told) to put a stop to the sheepmen v. cattlemen feud. He is accompanied by comic old-timer sidekick Harry Harvey (it was often Al St. John in his movies but this time it’s Harry). Of course they sing a song on the way there and Harry is the hilariously worst mimer ever seen: his lips don’t even remotely match the words of the ditty. Considering he had the second-biggest part it was rather mean of them only to bill him eighth. Harry was a vaudeville player who went into movies in the early 30s and took character parts for over forty years. Later he was a regular on the The Roy Rogers Show as Sheriff Blodgett. You can often spot him in Westerns, from being a stage passenger in the 1932 Tom Mix version of Destry Rides Again to a small part as Drew on a 1974 episode of Hec Ramsey, with, incredibly, almost 350 Western appearances between the two. In In Old Montana he does the old-timer act though in fact he was only in his thirties. 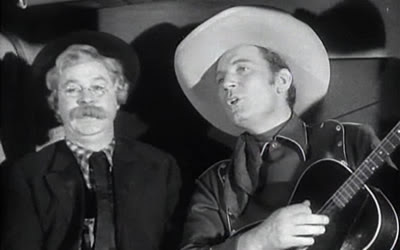 The picture has all the features we have come to expect and which, doubtless, the Western-loving audience (mostly of boys) would happily forgive. Cheap sets, lots of action (actually rather too many horse chases; they become monotonous), ‘comic’ interludes, intercut stock footage from earlier movies to save money, and so on. There’s a stereotype “squaw” (Jane Keckley) who can be made fun of. There are many songs in which Fred’s fingers in no way match the strumming that is heard and somehow an invisible violinist has got into the girl’s kitchen to accompany him. You spot who the villain (Frank LaRue) is instantly. The hero is unjustly imprisoned and breaks out with the aid of his sidekick.


Never mind, it’s all harmless fun. Right triumphs over might, the sheepmen and cattlemen kiss and make up, Fred gets the girl (Jean Carmen) and the bad guys are carted off to jail by the sheriff. I enjoyed it. I know I’m easy to please as far as Westerns go but still, I enjoyed it.