On the surface Hannie Caulder was a very American movie: a Western, produced by Patrick Curtis (Mr. Raquel Welch), directed by Burt Kennedy, released in the States by Paramount, and starring, with Raquel, Ernest Borgnine, Strother Martin and Jack Elam – how American can you get? Yet really it belongs in the ranks of the British Western, a curious hybrid animal that produced some real clunkers but also, now and then, a quality picture. The production company was Tigon British Film Productions, which also released it in the UK, and a couple of the support actors were very British – Christopher Lee and Diana Dors. 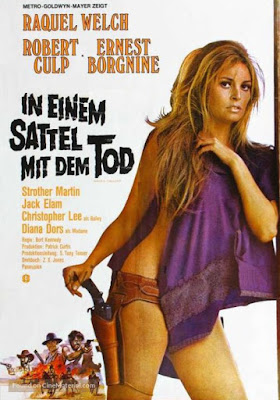 Racy poster makes the most of the star. Actually, though, I don't think she appears in the movie dressed quite that exiguously
The film’s date is significant because it gives you a good indication of what to expect. By the early 70s revisionist Westerns were in full swing and many of the good (white) guys were bad and the bad guys a lot worse. Westerns were sleazier and bloodier and described the outrages of white-trash lowlifes with more graphic detail. It was the time of movies such as Soldier Blue, Doc and Dirty Little Billy, post-Wild Bunch Westerns with Vietnam undertones and spaghetti influences, which debunked former heroes, didn’t spare the tomato sauce and played up the nastiness of the West in a way that bordered on the salacious.


That doesn’t mean they were all bad. They all have their points and they were what they were at the time. Westerns have always reflected the mores and zeitgeist of the period they were made in.


Burt Kennedy did, it is true, have a mixed CV as far as Westerns go but his profile was generally good. Think of his writing on those superb Randolph Scott/Budd Boetticher B-Westerns of the late50s, for example, or his direction of The Rounders, Welcome to Hard Times or those quality episodes of Lawman. He both directed Hannie Caulder and contributed to the screenplay (under the name ZX Jones) and it shows. You definitely get the feeling that a lot of the stronger points of the movie are down to Burt. 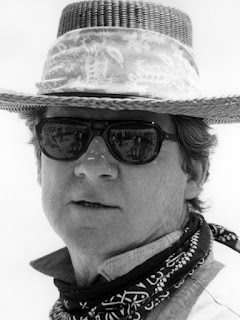 Burt
The story begins with the first in a series of depredations by three ugly, dirty, incompetent and brutal brothers, Emmett, Frank and Rufus Clemens, as they bloodily but unsuccessfully attempt to rob a bank in Mexico. The good news is that these brothers are played by Ernest Borgnine, Jack Elam and Strother Martin, respectively, and absolutely splendid as lowlife idiots they are too. 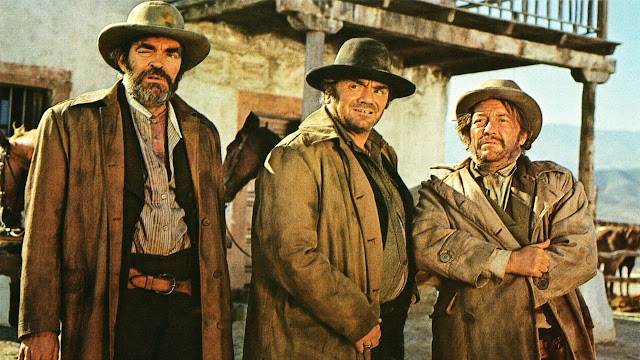 Splendid
After the fiasco they fetch up at a ranch or stage station, Rufus brutally murders the owner with a shotgun and then they serially rape his wife Hannie (Welch). It is an ugly scene. Afterwards, they drunkenly leave, Rufus casually burning the house as they go. Actually, I think Strother was playing his part as the further pre-Wild Bunch adventures of Coffer, without LQ (they had probably fallen out again).


Now Robert Culp arrives. We don’t really think of Culp in the saddle, do we? He was more a slick, cool, cynical I-Spy kinda guy. But of course he had started as Texas Ranger Holby Gilman in Trackdown in 1957 and had had character parts in a good many other Western TV shows through the 1960s. He didn’t do Western feature films, though he had been Wild Bill Hickok in The Raiders in 1963. In Hannie Caulder he is Thomas Luther Price, a bearded (and feared) bounty hunter - because, as I said before, even the good guys have to be bad guys. He has been described (sorry, I forget by whom) as Robert Redford’s grizzled older brother and there is something to that.

Redford's brother teaches her to shoot
Hannie wants him to teach her how to shoot, for of course she wants revenge on the Clemens ruffians, and though Thomas first says no, emphatically, we know he will relent, and he duly does.


So it’s a straight revenge Western – we’ve seen that plot a thousand times – but with the added twist that the trainee gunslinger who wants vengeance is female. There had been gunslingerettes in the past: one thinks of Jane Russell in Son of Paleface or Joan Crawford in Johnny Guitar, and Barbara Stanwyck could wear a low-slung holster too, but you always got the feeling they were slightly camp figures. Johnny Guitar seems almost a Western in drag. Here, we have a tough lady who takes on men on their own terms – and wins. Hannie gave rise to such figures as Sharon Stone in The Quick and the Dead, the Bad Girls of 1994 or the Bandidas Penelope and Salma in 2005, or was it 06. True, these were all poor films but we got used to a gal with a .45 and a swagger.

Role model for Sharon Stone
Ms. Welch does quite a good job, in fact, playing it in a restrained and low-key way which works. Some critics have been unkind about Welch’s thespian talents, and it is true you do get the feeling she is there because of other endowments she possesses – the fact that Burt has her mooch about the rancho in a poncho but nothing else rather suggests that. And later there’s some business in which she is obliged to take a bath in skin-tight buckskins. Still, I don’t think she’s at all bad as the brutalized woman who wants to be empowered. She had, of course, already saddled up in Bandolero! in 1968 and 100 Rifles in 1969, so it wasn’t her first outing in the Wild West.


They go back down south of the border to meet a gunsmith Thomas knows there, one who can make a weapon light enough yet powerful enough to suit Hannie’s slender wrist. It’s Christopher Lee, also bearded, with a huge brood of children about him. Lee was a horror specialist, of course, and the British production company specialized in that genre. He proves to be not only expert at making handguns from scratch but also at using firearms when a very Calvera-like gang of Mexican bandits turn up and their visit turns into a bloodfest. Culp and Lee, aided by the tyro Raquel, blast the bandidos to bits.

It gets quite Magnificent Seveny at this point
Meanwhile, Messrs. Borgnine, Elam and Martin are having a whale of a time playing the distinctly unpleasant objects of Hannie’s death-wish. They incompetently maraud, all the while bickering at each other. Kennedy probably allowed too much hamming from the trio (he was a better writer than director) but he liked the comic aspect. Eventually Thomas and Hannie turn up in the same town as the ne’er-do-wells and we understand that soon the lead will be flying.


There’s the odd appearance of a nameless and silent man in black (an uncredited Stephen Boyd, a Brit actor discovered by Sir Michael Redgrave who was Messala in Ben Hur) and it isn’t clear who he is or what he’s doing there (mysterious, man).

Preacher Boyd
Thomas tells Hannie that win or lose, you lose, and there’s a suggestion of the futility of revenge. Hannie ignores it, of course, because it’s a Western, but still it is an attempt to get the audience to actually think.


Luckily, Paco de Lucia was on hand when they needed a guitarist. Sixties British sex-symbol Diana Dors as a saloon madam only has one line but manages to deliver it really badly. 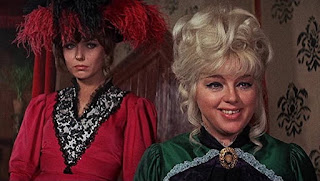 Madame Dors (right)
A lot of the music (by Brit Ken Thorne) is pretty ropey, though I did like the sub-Bernstein orchestrations when the sub-Calvera bandidos rode in.


You may guess how it all ends (no spoiler alert necessary). The bad song by Bobby Hanna which closes proceedings, added to the Almeria locations, the blood and the general garishness of the affair, make you think you have just watched a spaghetti western. But you haven’t. For one thing there are some lines in the screenplay clearly not written by someone who topped out his education in grade school, such as “You're a hard woman,” someone tells Hannie. “There aren't any hard women,” she replies. “Only soft men.” Nor is there that dreadful dubbing and dismal sound. And the people develop as characters. No, it’s not spaghetti pulp.

Strother, enjoying himself hugely
It’s not a great film, I wouldn’t want to claim that, but as early-70s Westerns go it’s one of the better ones.