Outlaws of the Range, reissued as The Call of Justice (Ray Kirkwood Productions/Spectrum, 1936)

Pretty well indistinguishable from a thousand other 60-minute black & white programmer B-Westerns of the 30s, this one (take your pick on the title) is a Bill Cody oater, one of only two he made in 1936 (his career was on the slide).


It was one of the four that featured his son, the then eleven-year-old Bill Cody Jr. Bill Jr. is in fact the best actor on the set, full of energy and vim. The second most natural actor was Bill Sr.’s horse Pal. The rest of the cast was dismally wooden, I fear.


It’s an ultra-low budget affair from Ray Kirkwood Productions, one of nine B-Westerns they made at that time, and distributed by Spectrum Films, which also did very few before folding. We’re talking real Poverty Row here. Blazing Justice the same year was another Cody/Kirkwood/Spectrum collaboration.


Bill Cody might be thought to have assumed that very Wild-West name but in fact he was born William Joseph Cody in 1891 in St. Paul, Minnesota (some say in Manitoba, Canada). He was no relation to the great Buffalo Bill, but his birth name was a happy coincidence for a star of horse operas. He started as a stuntman and bit-part actor in 1922. Curiously, he adopted a stage name, Paul Walters, for his early roles; you’d think he’d want to make the most of his real one. Then he got to feature under his own name in a series of eight silent second-feature Westerns starting in 1924. Unlike many silent Western stars, Cody made the transition to sound quite successfully (in a minor studio way) and made Westerns in the early 30s for Monogram. But as the decade progressed, Cody made fewer and fewer movies, alternating work with circuses and Wild West shows with short movie contracts for real Poverty Row outfits. His Awyon Picture The Border Menace (1934) has been called (probably unfairly) "the worst B-Western ever made".


These two 1936 efforts were the last time Cody topped the billing. He was soon reduced to ‘Henchman, uncredited’ parts and last worked at all in 1948.


The original title screen highlights Cody’s name but the re-issue title screen doesn’t mention Cody at all. It says ‘The Call of Justice, with Catherine Cotter’. This was even odder as Catherine Cotter didn’t exist. She was Marie Burton (1912 – 75). This was her last Western apart from a role as ‘Pioneer girl, uncredited’ in Wells Fargo the following year. 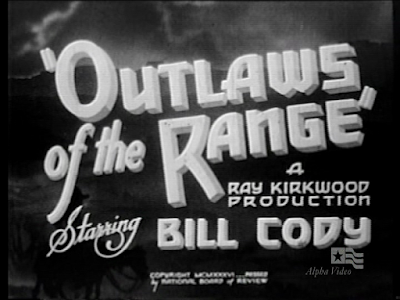 It opens with the principal characters watching old stock footage from some silent movie of a bucking bronc, and laughing. Well, that was cheaper than actually having a bucking bronc.


Then the heroine (Cotter-Burton) is rescued by Cody when her cinch breaks and she is dragged along in an extremely unconvincing stunt (well, stuntwomen cost money). Of course she twists her ankle, as rather pathetic girls did in those days, and Bill picks her up, saying that he doesn’t often meet “a sweet little girl like you” (I fear this movie wouldn’t pass muster in these feminist days). And naturally, she takes a shine to Bill despite the 21 years between them. 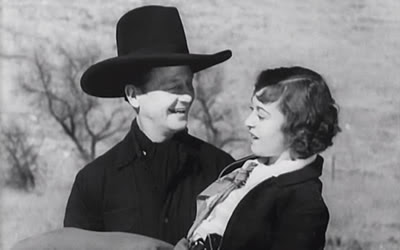 She has a little brother, Jimmy (Cody Jr.), of the kind known in those days as plucky. Fair maidens with plucky younger brothers were very useful in juvenile Westerns because most of the audience could identify with the lad while their older brothers could admire the sis.


This formula was repeated endlessly. In fact our next post will be a Rex Lease Western of the same period in which the plot was repeated almost exactly.


Well, there’s rustlin’ goin’ on, obviously, and equally obviously Cody Sr. will track down the bad guys with the help of plucky Cody Jr., and then get the girl in the last reel. The rustlers have a smooth-talkin’ boss, Grant (Gordon Griffith, a former child actor who had had the honor of being the first celluloid Tarzan and the first screen Tom Sawyer, who was also the rustlers’ boss in Blazing Justice) but we all know that this rotter will get his just deserts in the final moments.


The best scene is when Bill Jr. busts Bill Sr. out of jail.


The acting is dire, the plot utterly predictable, the writing plodding and the production values abysmal. In all other respects, it’s rather good.


Incidentally, Bill Jr.’s story is rather a sad one. His career didn’t do much better than his dad’s had, and after Army service in World War II, which affected him profoundly, he never acted again. Suffering from depression, he committed suicide in 1989.