Law of the Desert Born, A Graphic Novel by Louis L'Amour


The Western movie as book

I have been largely a stranger to the graphic novel. It is not a genre I have ‘got into’, really. That’s maybe odd, though, because I love Western movies and Western novels too, and graphic novels are a kind of blend of the two. And some of them are quite adult and intelligent. They aren’t just ‘comic books’.


My very kind and generous nephew James recently gave me one, Law of the Desert Born, A Graphic Novel by Louis L'Amour (Bantam, New York, 2013), hardbound, A4 size, and I’ve just read it (it doesn’t take long!) It is ‘new’ in the sense that it is, apparently, the first time a Louis L’Amour work has been given this treatment. I’ve always been a bit of a Louis fan on the quiet. Well, not so quiet, in fact. Anyway, I was pleased to try it. 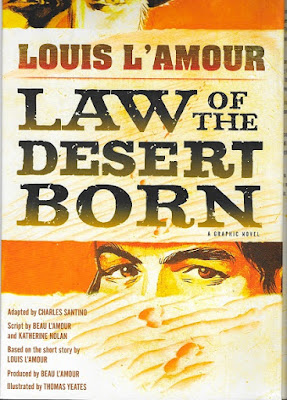 It started life as an early L’Amour short story published in the April 1946 edition of Dime Western magazine. The 40s and 50s were of course the heyday of the Western short story. Louis’s son Beau has produced and co-written the graphic novel and he says that up till then L’Amour had concentrated on adventure and crime genres, and Law of the Desert Born was only the third Western story he ever sold. Beau makes an interesting point about the shift (or shift back) to Westerns:


…after three years of war, America’s taste for exotic locales was waning. Too many GIs had returned from traumatic experiences in the Far East or on the high seas, and too many had spent their time on tropical islands or in the deserts of Africa dreaming of home. A new sort of adventure was needed, one located in North America and set reassuringly in the past.


At the time Law of the Desert Born was a tale which earned less than sixty dollars (at a cent and a half a word), quickly written and just as quickly forgotten after publication. It resurfaced forty years later as the title story of a Bantam collection. Then Beau made it into an audio book, then he wrote a screenplay based on it. Now it lives again – though with many changes from the original. 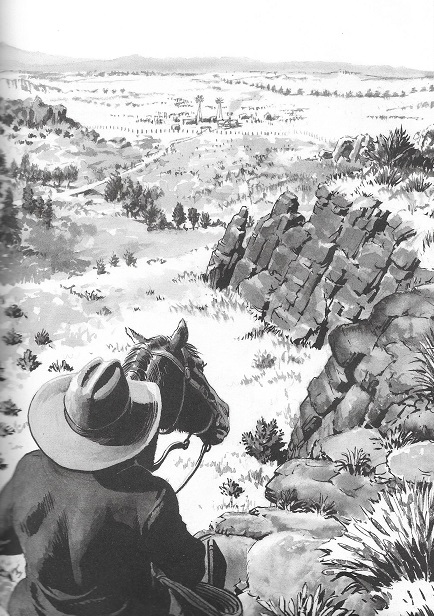 It is very well drawn by Thomas Yeates, in gray and white, like an old B-Western. It does rather remind me of the comics of my (distant) youth. But the text is more adult and addresses interesting themes of racism. Beau L’Amour and experienced writer Katherine Nolan co-authored the audio version, filling out the original very short story, then cutting it back when they realized they had overdone it, then brainstorming a different ending. Graphic novel hand Charles Santino worked with Beau on the text of the graphic novel version. 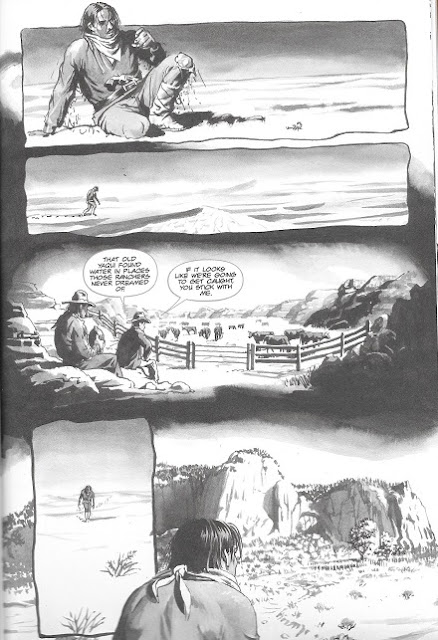 Set in New Mexico in 1887, it’s a pursuit story, as a tough old sheriff sets out with a small posse to catch the foreman of a rancher who has shot and killed the rival rancher and then gone on the run. An imprisoned Mexican-Apache (with certain similarities to Massai in Apache) has his own reasons for wanting to catch the fugitive and persuades the sheriff to let him scout for the posse. The reasons behind all this death and destruction become gradually clear as the story progresses (there are many flashbacks).