It was perhaps strange that a Mongolian from Brooklyn should so love Western movies. Yuly Borisovich Briner, or Юлий Борисович Бринер if you prefer, better known to us as Yul Brynner, just loved strutting about with a sixgun on his hip, and the Stetson he could wear all the time, even indoors, helpfully covered his bald pate.


Brynner was in seven big-screen Westerns in the 1960s and early 70s, including a weak Magnificent Seven sequel, a shockingly bad Pancho Villa picture, and a couple of spaghettis, ending with the sci-fi Western Westworld in 1973. They were all mostly low-key and low-budget affairs after the first, The Magnificent Seven, which was a huge hit – and still is.


Four years after starring as Chris in the Seven, Brynner did a much smaller second Western which has gone largely unnoticed. But it’s actually quite an offbeat, unusual affair. 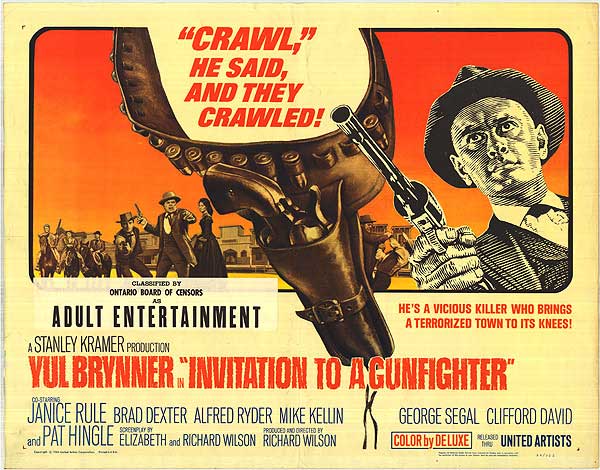 I'm not sure he did say crawl actually
He plays a fancily-dressed Creole from New Orleans who operates as a gun for hire partly because he thinks getting paid by white folks to kill white folks helps him avenge his slave mother who had been sold when she got too annoying to her white owner. That’s already quite an unusual premise and there are other psychological twists and turns which add to the interest.


Produced by Stanley Kramer of High Noon fame, with a runtime of 92 minutes, it’s in color and the DP was Joe MacDonald so it’s no cheap B-Western. There were also some good character actors, such as George Segal, Strother Martin, Brad Dexter (Harry Luck in the Seven) and Pat Hingle. The director was Richard Wilson, who was not maybe in the very top flight of directors but he had been assistant and admirer of Orson Welles and had directed Robert Mitchum successfully in Man With the Gun in 1955, quite an atmospheric noir B-Western.


New Mexico Territory, 1865. In the first reel we are introduced to a Reb, Matt Weaver (Segal) walking wearily home from the war, and a dandy (Brynner) riding on a stage (his stunt double athletically climbs from inside onto the box) and they both arrive in the one-horse town of Pecos. The Reb finds that his farm has been auctioned off by town boss Brewster (Hingle) and is now occupied by Yankee-sympathizers. He vows to get it back and he invades Brewster’s home with his army rifle. But Brewster whips up the town to hunt down the Reb (he’s the only Confederate in the place) and sends Crane Adams, a one-armed henchman (Clifford Davis) off to hire a gunfighter to do it. Little does he know that the fastest gun of them all is already in town. It’s dandy Yul, Jules Gaspard d’Estaing (which he tries in vain to get the townsfolk to pronounce correctly), in a very frilly dress shirt, silk vest, frock coat and the inevitable black Stetson he wore when he was Chris. 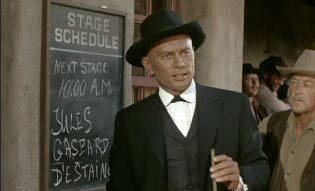 They just call him Jewel
Of course there’s love interest. Ruth Adams (Janice Rule), the wife of henchman Crane, had been in love with Reb Matt before he deserted her to go off to the war and she married Crane in pique. But she is unhappy with one-armed (and, it is hinted, incomplete in other ways too) hubby. Now Matt is back she has mixed emotions but helps him. But Jules moves in with the Adams couple as a boarder and begins to take an interest in Ruth too. He plays the spinet and guitar and knows poetry and stuff so she is attracted to him, you know how dames are. 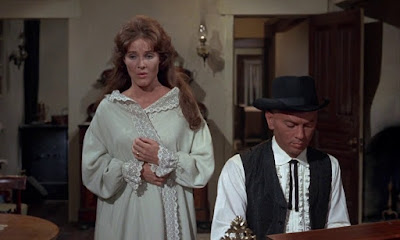 Cultured, you see
There’s a hilariously bad bit when the gunfighter Crane hired arrives, a real weirdo in a stupid hat and two guns (Dal Jenkins) who goes all slitty-eyed, like Jack Crabb in Little Big Man, when faced with danger. He takes one look at Jules and beats it with a speed to worry Usain Bolt. Do look out for this 30-second interlude if you watch the movie. You’ll chuckle all day.


Jules pals up with the Mexicans in town (oppressed minority, you see) and they like Matt so the big question is, will Jules kill Matt, as he has been paid to do? There’s a No Name on the Bullet (1959) vibe as the town is all set on edge by the presence of this gunman. Tension mounts, or anyway the director hopes it does. 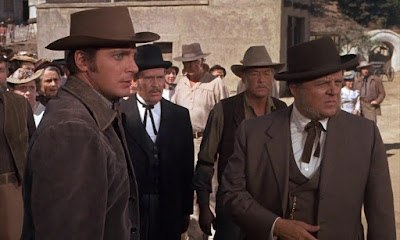 Hingle leads the townsmen in a witch hunt
It all gets twisted when town boss Brewster sees that gunfighter Jules is out of control and approaches Reb Matt with a view to changing sides. Will Matt kill Jules? Ah, there’s the rub. Well, there’s an action climax involving much tomato sauce on white shirt fronts.


All in all it’s a B-Western, I guess, but it does have a certain interest. And Yul gets to swagger about with his hat on. It’s a far cry from The Magnificent Seven but then all his other Westerns were. Still, you could watch it.