Despite the low budget and minor production company/theatrical release, Hannah Lee: An American Primitive is a high-quality 50s Western drama. It has suffered, in its life: first released in color and 3D (all the rage in ’53), it was most often seen in black & white and 2D, as simply Hannah Lee, or, on re-release, as Outlaw Territory. Nowadays the color print (or the print I have seen anyway) is scratchy, with washed-out tones and poor sound, and it jumps. It’s not easy to appreciate the film’s qualities. But qualities it has, without a doubt.


The story is from Mackinlay Kantor's book, Wicked Water (he also wrote the screenplay) which was based on the life of Tom Horn. This is a very fictional Tom Horn (and indeed he even has a different name) but then most novelistic and celluloid Tom Horns were fictional. Credited also with the writing is the colorfully named Alford van Ronkel, whose only Western movie this was.


It was produced and directed by John Ireland and Lee Garmes. Garmes was an innovative cameraman who had been taken up by the great Thomas Ince and went to Paramount as a director of photography. He worked with Josef von Sternberg on Marlene Dietrich pictures but Selznick replaced him on Gone With the Wind (good thing too, it was a dreadful film). He worked on eleven Westerns, eight of them very good and/or famous. He was co-director and co-producer on Hannah Lee, as well as being the director of cinematography, so had key input.


As for Ireland, he was another very interesting character and, for me, always a top-class Western actor. Born in Canada (but you can’t hold that against him; so were Glenn Ford and Bat Masterson) he was raised in New York and started on Broadway in minor roles. He became a heavy in movies but he was justly admired as Cherry Valance in Red River in 1948 and was nominated for best supporting actor in All the King’s Men in 1949. He was excellent in the underrated Little Big Horn in 1951. Later, he was to have played the role of the patriarch of the Ponderosa in Bonanza: The Next Generation (1988) but the series was not picked up. Hannah Lee was quite a personal project for him, and he co-produced and co-directed it with Garmes, and starred as the US marshal who brings Tom Horn (or Bus Crow anyway) to book. 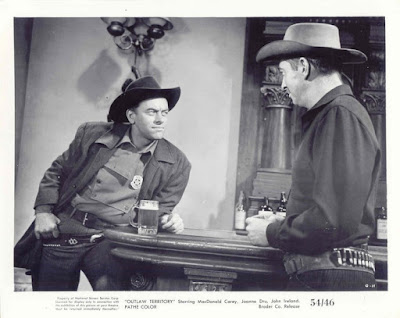 Now this Bus Crow, the Tom Hornish hired gun (he says he has killed 62 men “but I exclude Indians and Spaniards”), is played by Macdonald Carey. Although we all think of Mr. Carey as Dr. Tom Horton on Days of Our Lives, he actually had a previous reputation as ‘King of the Bs’ in Hollywood. He’d even been the detective in Hitchcock’s Shadow of a Doubt in 1943. And he did eight Westerns. He was, for me, memorable in his first, Streets of Laredo, as bandit Lorn Reming. He was also (a hopeless) Jim Bowie in Comanche Territory (best left unwatched) and Jesse James in The Great Missouri Raid (ditto). But I must say, he was absolutely terrific in Hannah Lee, far and away his best Western performance. He plays the hired killer as if he had a past, as if there were trauma in his life which explained (though did not excuse) his current profession. “When I was a kid I was paid for killing gophers,” he says, “then I was paid for killing Indians. Now I’m just paid for killing.” 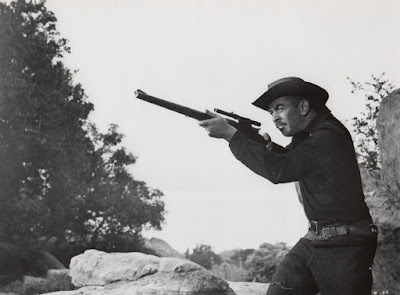 Of course he’s a badman. We know this instantly because he slaps a young boy in the opening scene (and you don’t need a degree in Hollywood semiotics to read that one). And he shoots rustlers (the cattlemen have a list) with a bolt-action rifle with telescopic sights (we are in a post-Spanish-American war period), sometimes in the back. In Hollywood Western terms, you couldn’t be much badder. Yet Carey manages to make you wonder why he’s doing it, and while you don’t exactly sympathize or empathize with him, you still catch yourself being half on his side. Well, 20% maybe.


Actually, the boy he wallops is Willie Nickell – in fact he’s named Willie Stiver in the movie and he’s Peter Ireland, John’s son. And later in the film Bus will shoot the boy. He’ll not realize it’s just a kid in the bushes, and he’ll look desolate when he discovers what he has done, and furthermore the boy will survive, so it’s not really the Tom Horn story, but still, it’s a powerful interlude.


Another good thing: Frank Ferguson is one of the cattlemen. I always like to see Frank. He’s reluctant to draw up the death list and hire gunfighters but he goes along with the scheme. 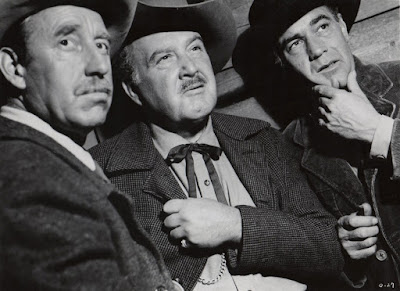 We are in Pearl City (not Hawaii) and this gives rise to a couple of good lines, such as the marshal saying that he might find pearls here, or maybe swine (such biblical references would have been understood then, and even in 1953). But it’s clearly supposed to be Wyoming and Pearl City is Cheyenne.


The leading lady is the then Mrs. Ireland, Joanne Dru, playing Hallie McLaird, saloon owner. She’s not Hannah Lee at all, though presumably was in the past. She and the marshal ‘go back’. But they broke up and now she is more than half attracted to gunman Bus Crow. It’s interesting because with her head she knows Bus is guilty of the murders and in fact builds a strong case against him, yet with her heart she feels he could never shoot anyone in the back from hiding, still less shoot a small boy (a boy she is kind to in the first reel, counterbalancing Bus’s striking the lad). 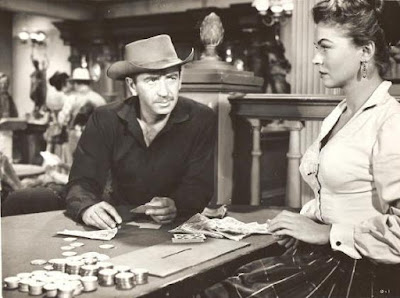 Ms. Dru does a good job of playing the hard-as-nails saloon woman who nevertheless yearns for love. She and John had of course been together on Red River for Howard Hawks and she would take the female lead in She Wore a Yellow Ribbon the year after and, again for John Ford, be in Wagon Master the year after that. It was a stellar start in the genre. In 1951 she’d starred in the classy Vengeance Valley with Burt Lancaster, so she had a damn good Western CV by the time of Hannah Lee. 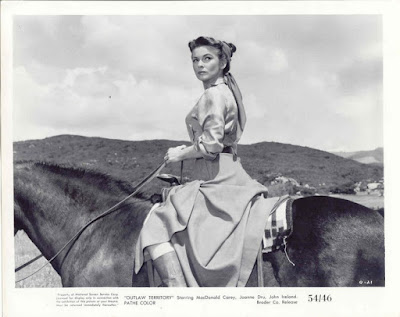 In her saloon a cheery trio sing


High, high, high are the gallows
Long is the rope that waits for me


which kinda sets the tone. Tristram Coffin is the bartender: his looks were as lugubrious as his surname and he also helps set the tone in the saloon. Baby boomers will probably remember him as the captain of Arizona Rangers in the 1957 series 26 Men. 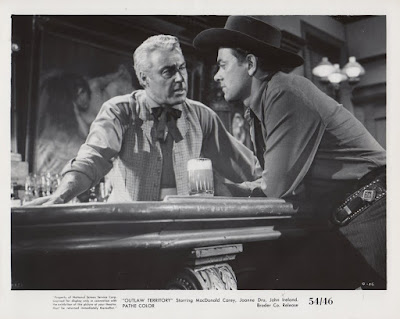 Some of the Kantor/Van Ronkel writing is actually quite good, for example the double-meaning dialogue when Bus and Hallie are playing cards.


There’s a gunman/marshal showdown with rifles in the rocks very reminiscent of Winchester ’73 and a sort of inevitable ending as Mr. & Mrs. Ireland ride off into the sunset. 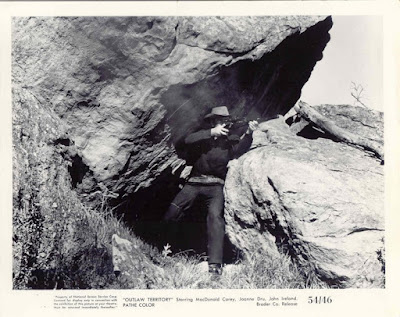 It was shot up at Chatsworth, Cal., and doesn’t look at all Wyomingish but just like a million other Westerns. There’s bad continuity/editing (Sampson/Schaeffer) and that adds to the B-Western feel to the movie. Still, there are so many strong points that you overlook these matters, and all in all Hannah Lee (I’m not quite sure in what sense she was a primitive) is an interesting Western. 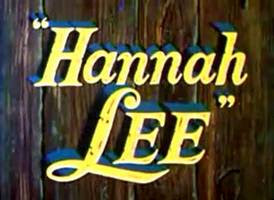