Ben Johnson was such a good Western actor, one of those stars who raised a mediocre picture and who made a top-drawer Western even more memorable. He seemed to have shone in minor parts in fine Westerns (such as John Ford's) or topped the billing in clunky B-Westerns, but little in between. Why is it that his really minor role in Shane sticks in the memory? Well, partly because the leads were a bit on the weak side but mainly because he was just such a superb actor. Look at One-Eyed Jacks: Johnson in a tiny part brilliantly plays fear in one scene, out-acting Brando by miles. True, Brando was a lousy actor, but Johnson puts him totally in the shade. 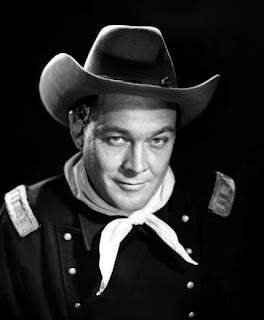 Fort Bowie was in the clunky B-Western department. A predictable black & white cavalry vs. Apaches oater with rather plodding writing (B-movie hack Maurice Tombragel), it could have been a late 50s RKO picture. It was in fact released by United Artists, and made by Bel-Air Productions, which had done Fort Yuma. They liked fort pictures, and indeed Hollywood in general had a soft spot for Westerns centered on forts, as Fort Apache, Fort Courageous, Fort Defiance, Fort Dobbs, Fort Massacre, Fort Osage, Fort Ti, Fort Utah, Fort Vengeance and Fort Worth, to name but a few, will attest. 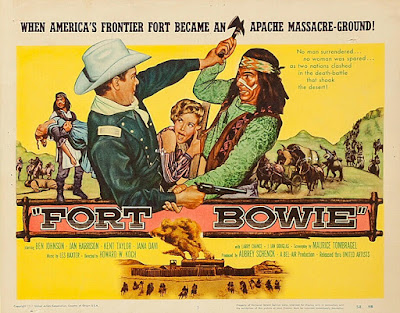 We’re at Fort Bowie, AZ, some time after Little Big Horn (so the dialogue confirms) and Victorio’s Apaches are on the warpath. No wonder, because a stupid by-the-book major (J Ian Douglas) has murdered the band of Santos who had come in under a white flag of truce. An obtuse (often Eastern) or political superior officer set alongside a less formal Western ‘man who knows Indians’ is a very standard trope of cavalry Westerns, and indeed, Fort Bowie is in many ways a cut-price Fort Apache, with Ben playing the John Wayne part and Mr. Douglas essaying valiantly (but vainly) to be Henry Fonda. It was Douglas’s only Western, and in fact I think his only movie, and he was hopeless. He probably took up woodwork.


The other ‘stars’ too are very much on the B list. The nearest to high-profile is Kent Taylor as the colonel, whose ghastly wife Capt. Ben is assigned to escort to Bowie. Mr. Taylor was a sort of poor man’s Clark Gable, which isn’t saying much because as far as Westerns go Gable was the poor man's everyone else. True, Kent was Doc Holliday in Tombstone, the Town too Tough to Die, so credit there, but Westernwise, he was largely confined to minor roles in TV shows.


The worst actor on the set without doubt was Jan Harrison as the colonel’s wife, Alison. She was absolutely dreadful. Calling someone a dumb blonde is these days not p.c. but honestly, … She proudly recites the lines she has just managed to learn but she comes across as Marilyn Monroe without the looks or talent.

Victorio is not Michael Pate as in Hondo five years before but Larry Chance. He’s actually quite good, within the severe limitations of the script. Mr. Chance had been Ponce in War Drums, a Lex Barker B-Western the year before (which also had Ben Johnson in it), and was another stalwart of Western TV shows, though he had reached the heights of ‘Young punk, uncredited’ in the feature film River of No Return.


There’s an Indian maid, obviously, with whom Ben will half-heartedly canoodle, and she will, just as obviously, be played by a white actress in heavy make-up, Maureen Hingert this time, who had had a very small part as ‘Indian woman, uncredited’ in Pillars of the Sky in 1956. She too was unconvincing. 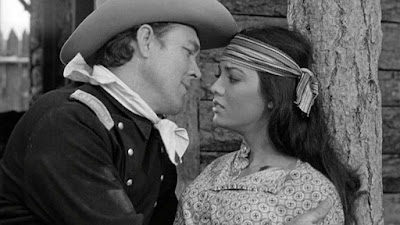 Probably the best non-Ben actor was Peter Mamakos as the bearded Greek sergeant, Kukas. He was one of those that Hollywood wheeled on for any ‘ethnic’ part (he'd even been Geronimo once), one foreigner being very much like another, after all. 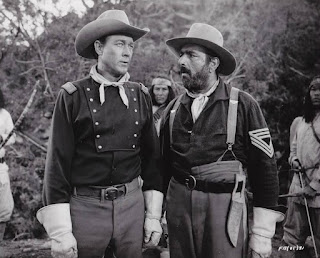 The picture was directed by Howard Koch. He later became head of production at Paramount but he certainly wasn't much of a hand at directing Westerns.

Well, the evil major gets his just deserts, perishing at the hands of the warrior Victorio (who has a very flash Henry rifle), but then the Apache chief attacks Fort Bowie (one of those wooden toy forts Hollywood loved) but is killed there by the colonel while he is fighting hand-to-hand with Ben (all this is historically accurate, obviously). Actually, the defense of the fort by the soldiers is totally pathetic and they fully deserved to be overrun. But the rest of the US Cavalry arrives at the last moment, bugles blaring, as the US Cavalry was wont to do in Western movies, the colonel and his lady are reconciled, Ben walks off to do some more canoodling with the Indian maid, and they all lived happily ever after, in what is, frankly, a pretty weak B-Western - one, ne’ertheless, worth watching because of Ben Johnson, which is why it got two revolvers.