In 1957 – 58 producer/director Al Gannaway made a handful of low-budget black & white B-Westerns, with a stock company of actors he had gathered around him. The pictures were released mostly by Republic, though The Badge of Marshal Brennan was for Allied Artists.


Marshal Brennan had huge similarities with Raiders of Old California of the same year. Jim Davis led in both. Louis Jean Heydt, Lee Van Cleef, Arleen Whelan, Harry Lauter, Douglas Fowley and Marty Robbins backed him up. They used a very similar crew, the actors wore the same costumes, and they even repeated some footage of Davis killing three Indians. The pictures were also similar in quality (or lack of it), though Badge was a little better than the others. 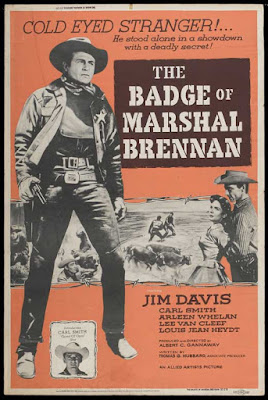 Probably the best of 'em
Gannaway was keen on using country singers in his Westerns (of course later that became a real fashion). Faron Young and Marty Robbins were in several of them. This one has Carl Smith as Sheriff Carl Smith. He isn’t too bad, actually, a lot better than Faron Young anyway. He plays it in a laid-back way. So laid back, in fact, he’s almost horizontal. Sheriff Carl Smith
It’s the good-badman plot, with a bit of arrogant rich rancher vs. decent townsfolk thrown in. Davis is man on the run from the law (though innocent, naturally – it was self-defense) who escapes the posse by riding into Apache lands and meets up with a dying US marshal. One would have hoped, especially given Gannaway’s propensity for giving his characters their real names, that this Marshal Brennan would have been played by Walter Brennan, but budget constraints being what they were… Still, we did get good old Douglas Fowley, always enjoyable to watch. This marshal, with his dying breaths, puts outlaw Jim on the straight and narrow. A man’s gotta do what a man’s gotta do and all that. So Jim takes the late lawman’s badge and passes himself off as a US marshal. 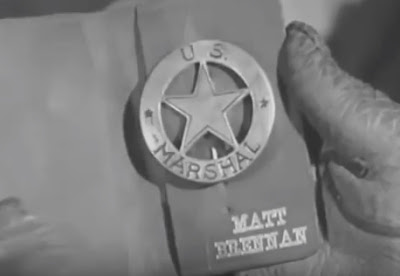 The badge
Once in the town of Banock (I would have thought it was Bannock but the sign reads BANOCK) we are introduced to the arrogant rancher Col. Doniphan and his evil son Shad. They are played by Louis Jean Heydt (who was a goody in Raiders while Jim was the baddy so they have rung the changes) and Lee Van Cleef. Heydt was a reliable but rather forgettable character actor and did a lot of Westerns, usually just bit parts, but Gannaway gave him some prominence in his movies. Van Cleef was still relatively early in his splendid Western career (debuting, of course, as one of the gunmen in High Noon) but he’d already appeared in twenty Western movies and a whole host of Western TV shows so was quite well known. He’s great in Marshal Brennan, really nasty.

Louis Heydt, looks rather good as ruthless rancher
There’s a decent doc (Harry Lauter, another Gannaway regular) who believes the Doniphans’ cattle have black spot fever and are infecting the locals, who begin dying in droves. The Doniphans won’t admit it, though, and will stop at naught to prevent the herd being put down. Only a US marshal has the legal right to do something about that and lo, here comes a US marshal – or that’s what he says he is. Sheriff Smith has seen the Wanted dodgers and knows different, but he doesn’t let on.


Well, mucho skullduggery follows, you may be sure of that, and outlaw-on-the-run Jim is persuaded to stay and help out, using his marshal’s badge. Who persuades him? Why, a fair maiden of course. Well, Arleen Whelan anyway. Ms. Whelan, erstwhile John Ford alumna but now on the downside of her career, plays Murdock, the café owner. The doc moons over her but she prefers the mysterious marshal. Jim is also persuaded by a mangy dog, which he befriends (well-known Western code to show he is a goody at heart). Lerve
Marty Robbins is one of the Doniphan men. He’s Felipe, a blond Mexican, or at least I think his accent is supposed to be Mexican. He’s callously murdered by Lee when he gets the fever. There’s an Indian in a wig, Chicamon (Lawrence Dobkin), who wants to kill the doc because the medico let his son die (which seems a bit unfair) but he later comes round and fights those really responsible for the demise of Chicamon Jr. alongside the doc. And there are sundry other forgettable characters, including the governor, whom rich rancher Doniphan thinks he has in his pocket but who actually turns out to be rather more independent. 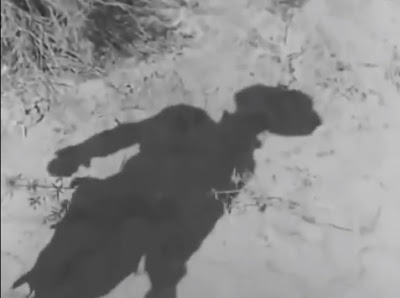 Don't worry, Jim, it's not going anywhere
The look of the thing is very much that of a 50s TV show, with cheap staging and a grayish monochrome. There’s the occasional half-good shot, such as the one of Jim’s shadow (he makes a good deal of not being able to escape your shadow, which is rather stating the obvious). And at one point Lee throws the vial containing the doc’s blood sample at the camera and the goo oozes down the lens rather memorably. 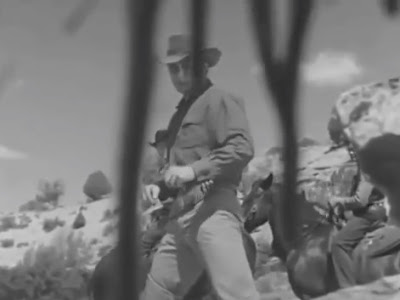 Lee throws blood at the lens
The music by Ramez Idriss is annoying, played on a Fender guitar, we are told, occasionally augmented in the ‘exciting’ bits by kettle drums. Electric guitar accompaniment only really works, though, if you are Neil Young.


Well, well. I have seen worse, definitely. Jim Davis was growing as a Western star and Lee Van Cleef is never less than excellent. Some of the other acting is in the iffy department though. The writing, direction and staging are on the ropey side – it was after all a very low-budget affair. But it’s probably the best of these Gannaway Westerns and you could certainly watch it if it came on TV, though I would not recommend a DVD purchase (actually I’m not even sure it’s available).