A bit of a clunker

Raiders of Old California is a pretty ropey black & white Republic B-Western of the late 50s, produced and directed by Albert C Gannaway. Mr. Gannaway was perhaps best known for being married to the tempestuous starlet Corinne Calvet, for a few months, but he made some Westerns, seven in all, such as Daniel Boone, Trailblazer (with Faron Young) and The Badge of Marshal Brennan, with Jim Davis. Raiders starred both Young and Davis. I fear none of the pictures was very good. The budgets were low, the writing plodding and the acting mediocre at best. 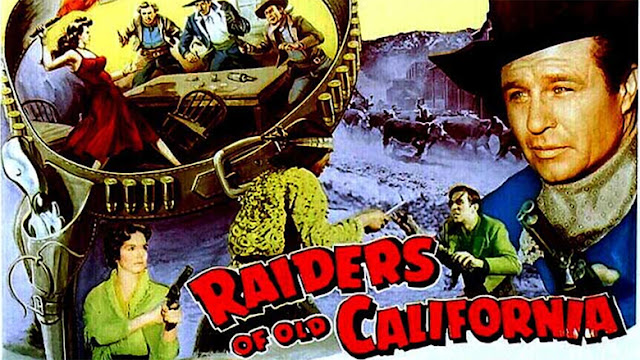 Very low-grade stuff
Country musician Faron Young, known as The Singing Sheriff though he only appeared in three Westerns (all Gannaway productions) was, sorry to say it, an utterly unconvincing Western actor. He must have had shares in Brylcreem, judging by the way he applied it. In Raiders Faron Young is Marshal Faron Young, a lawman with superpowers, including a punch like Rocky Marciano and marksmanship with a pistol which would have won an Olympic gold in rifle shooting. 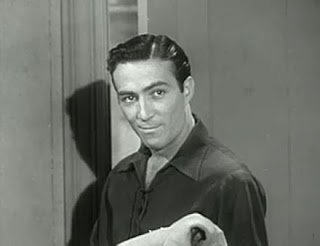 Faron Young, hopeless
His opponent is Jim Davis, whose B-Western career had started in 1942 at Republic supporting Bill Elliott and was still going strong. He’d been very popular as railroad detective Matt Clark in Republic’s Stories of the Century on TV in 1954-55 and had won increasingly big roles but Raiders was his first top-billing. He is corrupt Captain MacKane in California, 1847, who extorts land from a noble hacienda owner and becomes a power-mad cattle baron. His sergeant, Pardee, is Lee van Cleef, in quite a big part, and he becomes MacKane’s chief henchman and murderer in civilian life. Among the troop too is Marty Robbins, in a tiny part as a corporal (this and two other Gannaway oaters were his first Westerns) so it’s quite a country singer outing, though fortunately the harmonic talents of neither Young nor Robbins are called upon. 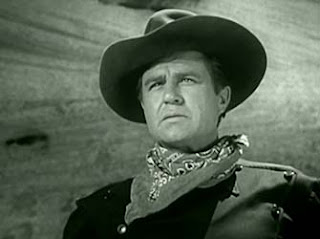 Power-mad cattle baron Jim Davis
There’s also Lt. Harry Lauter but he’s a goody and disapproves of the Davis/Van Cleef skullduggery. Later he will agree to testify against them but get shot for his pains. Lauter was popular because of Tales of the Texas Rangers on TV.


The most enjoyable character, though, is Douglas Fowley doing a bewhiskered old-timer sheriff part. He was still only in his forties at the time but you can see he was having fun hamming it up. 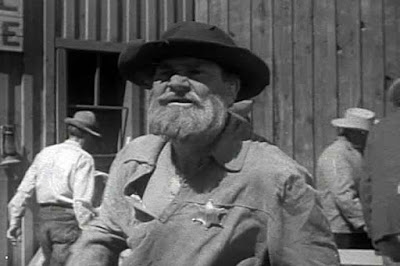 Having fun
I will not regale you with the plot. It’s all predictable anyway. Marshal Young’s dad is Judge Young (Louis Heydt) and they make a hot-shot legal team. There’s a dame (Arleen Whelan) but no love interest for the main characters because she is happily married to Lauter and hardly has anything to say apart from loyally supporting him. Ms. Whelan had been quite a big star, and a favorite of John Ford, but now her career was on the wane and Raiders and another Gannaway epic the same year, The Badge of Marshal Brennan, were her last movies.


It’s set in 1850 but of course all their clothes and guns are 1880s. Well, you couldn’t ask too much of Republic’s props and costumes department. Jim wears a cavalry shirt and low-slung holster and looks a bit like Matt Clark.


There’s a stampede at the end but it looks like stock footage (if you’ll excuse the pun) and the trampling done to remove a couple of characters is very poorly staged indeed. In fact it’s dire. Father-and-son judge ‘n’ marshal then ride off into the sunset, presumably to bring law ‘n’ order to another town.


Well, it had to get one revolver in the Jeff Arnold rating system. I mean it’s a Western, isn’t it? But it sure don’t deserve more. Still, if it came on TV or something you’d have to watch it. Van Cleef is good. 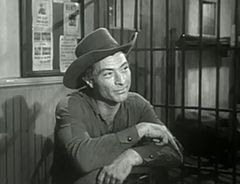 Van Cleef, never less than excellent, even in junk