On one level, Powder River is just a cheap remake of the same studio's My Darling Clementine, with another town-taming marshal dealing with Clantonesque baddies, a dying doc as the marshal’s pal and a pure Eastern woman vs. a racy saloon gal as the love interest. But on the other hand, it’s a straight-down-the-line Western B-movie, very well done, with reliable character actors and quite pacey direction. It is, in fact, very enjoyable. 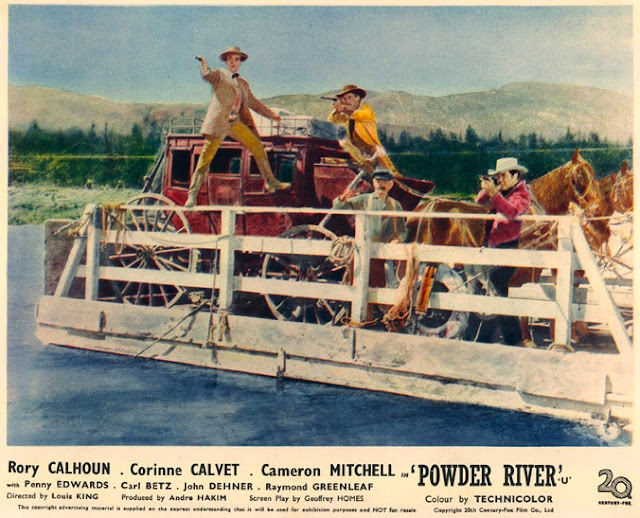 Good little B-Western, worth a watch
It stars Rory Calhoun and while no one would claim that Rory was in the Gary Cooper/Henry Fonda class, he was still solid and reliable as a Western hero, in a B-movie kinda way. And he’s backed up with some old stagers, old friends we Westernistas might almost say, in lesser roles. Rory’s sidekick in the first reel (though regrettably soon shot to death) is Frank Ferguson. John Dehner is the crooked saloon owner. Robert J Wilke is a baddy henchman. James Griffith is the hotel clerk and Hank Worden (uncredited) makes a brief appearance. And Cameron Mitchell plays the Doc Holliday figure, Mitch Hardin. Come on, that’s a pretty durned good line-up. 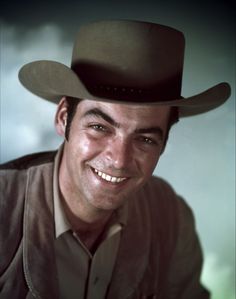 Rory
The director had indubitably seen My Darling Clementine but he was no John Ford. Louis King (1898 – 1962) was brother of Fox’s prolific Henry King but had not Henry’s talent. Louis had been in movies since he was a Western villain in 1919 but had started directing second-feature Westerns in 1921. Later he churned out Bulldog Drummond and Charlie Chan pictures but really his forte was Westerns. Probably his biggest oater was the Joel McCrea/Shelley Winters Destry copy, Frenchie, for Universal in 1950, and indeed, uncoincidentally, Frenchie is again the saloon owner in Powder River, played this time by the slightly sensational Corinne Calvet – who was actually French (unlike previous Frenchies). 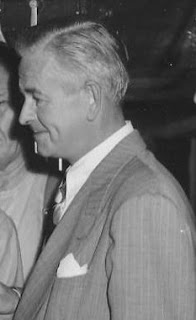 Louis King
Tempestuous Mlle. Calvet was a protégée of Hal B Wallis and signed for Paramount in 1949 but her career went a bit downhill thereafter. She was the woolly-hatted ingénue in The Far Country with James Stewart and co-starred with Rory in two Westerns (this one and Apache Uprising) but she only did four oaters in all. She was probably too busy with her sensational private life. 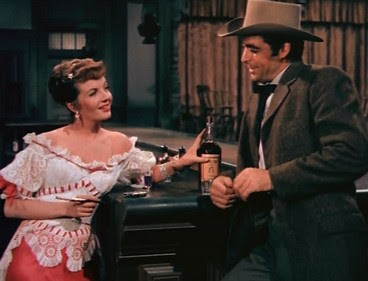 Corinne is Frenchie
In the best bit of the movie, she offers Rory a derringer to go shoot somebody. He obviously declines the pop-gun as unworthy of him.

Rory, use a derringer? As if.
1875. An ex-lawman, Chino Bull (Rory), wants to hang up his guns and be “like other people” so in the mountains he joins his partner Johnny (Ferguson) prospectin’ for gold. But then he is threatened by two hoodlums (Carl Betz and Robert J Wilke) and while he is away in the nearby town of Powder River Johnny is killed and their gold stolen. So Chino has to strap them irons back on. He takes the marshal job he first turned down (just like Fonda in Clementine) because that’s the best way to get justice/revenge for poor old Johnny. 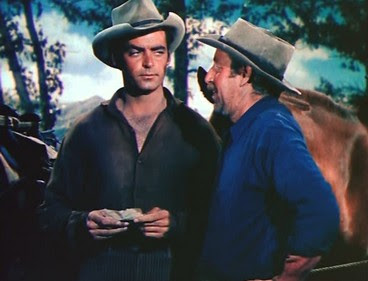 Good old Frank Ferguson is Rory's sidekick
Naturally (because this is a proper B-Western) there is a crooked saloon owner in town, Harvey Logan, and, happily for us, it’s the excellent John Dehner. Turns out, he’s the brother of Loney Logan (Betz), one of the bad guys who ‘visited’ Rory and Johnny in their camp. And Harvey has suddenly found the cash to set up his own saloon, the Palace, right across the street from Frenchie’s Bella Union, where he used to deal blackjack. So the plot thickens. 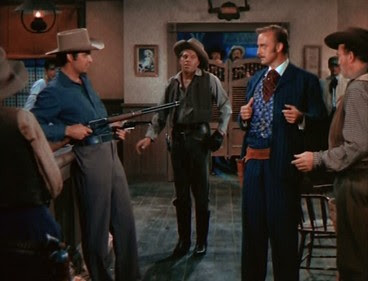 And John Dehner is the crooked saloon owner (again)
It’s a great town, by the way. I’ve seen it before in several Westerns. Don’t know where it is but it’s one of the best Western towns ever.


Anyway, as marshal, Chino now locks Frenchie up for running a crooked craps game, and her beau, the violent ultra-fast gun Mitch Hardin, is soon gunning for the marshal as a result. But just as they are about to draw against each other in the Bella Union, Hardin is taken with a malaise. It turns out he has a brain tumor and is often debilitated in this way. And soon ex-Doctor Hardin and Marshal Bull are respectful, wary but firm friends. 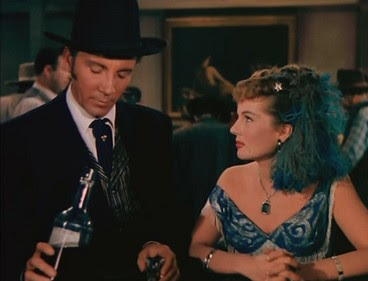 Cameron Mitchell excellent as the Doc Holliday-figure. But then he always was excellent.
I like the way Mitch is played by Mitch, and I must say Cameron was one of the better screen Doc Hollidays. I’ve seen some low-slung holsters in my time but I think Cameron’s takes the biscuit. It’s even further down his leg than Matt Clark’s. It’s a knee gun.

Of course, naming the character Hardin was a nod to John Wesley of that Ilk and signifies lethal gunman.


Well, then the Clementine-ish Deborah Allen arrives on the stage. It’s Penny Edwards, former Ziegfield Follies gal who took over from Dale in later Roy Rogers epics. Later she was a regular on Western TV shows. She does a good job as the rather prim lady who has coming looking for ‘Doctor’ Hardin to take him home to get treatment for that tumor. Of course Doc doesn’t agree (though he really loves her) and sends her packing on the next stage East. But she doesn’t go: she is attracted by the marshal.


There’s a pleasant, bucolic scene (shot in Glacier National Park, Montana) in which Deborah and Chino ride out in a buggy and pick azalea flowers for the grave of Johnny. It could have been directed by brother Henry. 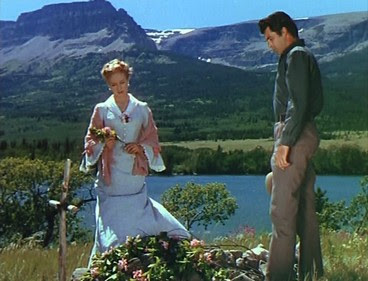 Bucolic
Now, a mine owner wants to get a gold shipment out but fears robbery, so Marshal Rory uses the old stand-by of a decoy stage, and he and Doc are aboard to foil any hold-up. There’s a good bit where they put the stage on a ferry and are attacked by Loney’s gang, who are after the non-existent gold. The marshal and the doc drive the baddies off and get back to town. 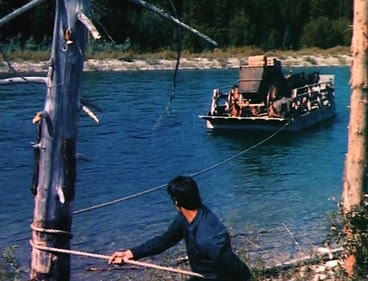 Good scene
Debbie is accidentally shot and naturally Doc has to redeem himself by operating on her and saving her life. It was the Chihuahua figure, not the Clementine one, in My Darling Clementine but hey, they rang the changes here.


The showdown now looms as the Logan gang ride in. There’s dynamite and plenty of shootin’. And there’s a plot twist (which I forbear to reveal) about the murder of Johnny and theft of the gold. There’s a climactic quick-draw showdown in the last moments and then Rory and Debbie live happily ever after.


The writers were Geoffrey Homes and Sam Hellman, using, obviously, Stuart Lake’s book as a starting point. Geoffrey Homes was the nom de plume of Daniel Mainwaring, ex-PI, journalist and writer of hard-boiled crime dramas. He wrote quite a few B-Westerns and TV shows. Probably the best was his 1952 adaptation of Ernest Haycox’s Bugles in the Afternoon. Sam Hellman had worked on My Darling Clementine and the 1939 Frontier Marshal, so was pretty expert on the theme. He’d also co-written The Return of Frank James for Fritz Lang in 1940, so was a class act.


The DP was by the real artist Edward Cronjager (Cimarron, Western Union, Canyon Passage, etc.), so the photography is very good, though there are few location shots; most was done on studio sets. The color’s nice and the print still good. The music is by Lionel Newman and quite pleasant.


The New York Times called it "a mess" and "baffling". Nonsense, it's neither. Excellent stuff, and well worth a watch. It’s really a B-Western as B-Westerns ought to be.