The other day we were talking about minor-studio B-Westerns of the 1930s, looking at a Bill Cody one, Blazing Justice. But there were very many of them – 60-minute black & white theater-fodder churned out in days on a shoestring budget by studios that were far from grand. Some of them starred Jack Perrin – not a name to stir Western fans, I fear. Many such aficionados won’t even have heard of him. 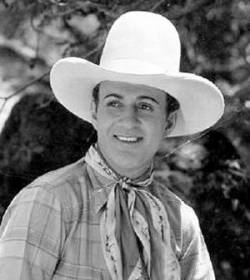 Born in 1896, Perrin entered movies in the very early days – in 1916. And he was to make an astonishing 340 Western appearances in a career that lasted until 1962. After serving in the US Navy in World War I Perrin got a contract with Universal, then the largest studio in the world. This was his heyday and he starred in huge numbers of silent one- and two-reel oaters, many directed by Edward Laemmle, nephew of studio boss Carl. But Universal did not renew his contract in 1921 and Perrin descended rapidly into the world of Poverty Row Westerns, riding for ever-smaller studios in ever-more minor parts, using his own name or occasionally the pseudonyms Jack Gable or Richard (Dick) Terry. In the 1930s he was working for companies at the very bottom of the Hollywood food chain, headed by ultra-low-budget specialists like Harry S Webb, who in 1933 founded Reliable Pictures. North of Arizona was a typical Webb-Perrin production. 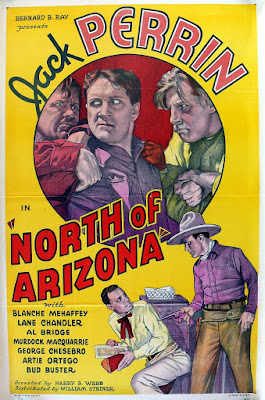 
Perrin is Jack Loomis, a cowboy looking for work. The barman in the saloon tells him to apply to rancher George Tully (Al Bridge). We can tell instantly that Tully is a bad guy because he wears a suit and has a pencil mustache. But it takes Loomis a little longer to work that out. Tully and his henchmen decide to stitch Loomis up for a robbery they are going to commit, and it works too. The local marshal (Murdock MacQuarrie, known for Modern Times with Charlie Chaplin), who doubles as the storekeeper (well, you have to keep the costs down), is obliged to arrest Loomis. The marshal has a pretty daughter, Madge (Blanche Mehaffey, a regular on Hoot Gibson and Bill Cody Westerns) for whom Loomis will inevitably fall – and, let it be said, she for him. 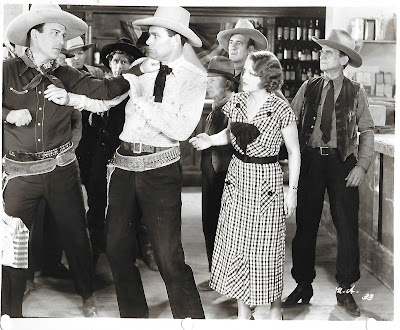 Loomis’s rival for the hand of the fair Madge is Lane Chandler, who himself flirted with Western stardom but who, like Perrin, was by 1935 on the way down, accepting supporting parts in whatever movie he could get.


There’s a sub-plot of Indians (one of them, Grey Wolf, is Budd Buster) who are being cheated out of their rights by the dastardly Tully, and Loomis takes up their cause. They live in a one-teepee village (well, you have to keep the costs down).


Well, dear e-pard, I think it is fair to say that you will miss little if you do not get to see this movie. You need not search desperately for a copy. On the other hand, if it comes on TV maybe, you could watch it. It’s quite interesting to see a typical Jack Perrin offering, however ‘B’ it may be. 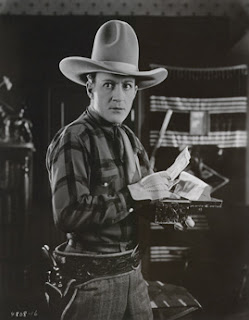 Perrin's last major role was as Davy Crockett in Republic’s The Painted Stallion in 1937. In his later years (he died in 1967) he took uncredited bit parts in Western TV shows and often appeared as (for example) “Townsman, uncredited” in Western movies – any work he could get, in fact. Jack Perrin’s very last Western appearance was as “Statehood Audience Member (uncredited)” in The Man Who Shot Liberty Valance in 1962 (John Ford was actually quite good about giving work to old-stagers).