A bit of a yawn

Barely a Western at all, Hidalgo is a kind of Bite the Bullet 2. Unfortunately, Bite the Bullet wasn’t very good in the first place.
Nor do I really know why it’s called Hidalgo. It is not about Spanish nobles. I think it was the horse’s name, that's all.
It was Viggo Mortensen’s second Western(ish) film after being John Poe in Young Guns II, but before he was the excellent shotgun-armed sidekick to Ed Harris in Appaloosa in 2008. I had heard that he was to have starred in a sequel to Dances with Wolves but that doesn’t seem to have happened. Apparently he was Aragorn in a Lord of the Rings movie but I haven’t seen any of those.  He’s OK as Frank Hopkins, cowboy, in Hidalgo. No complaints really. 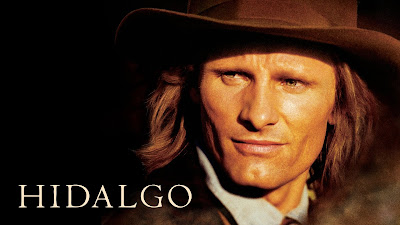 It’s a horse-race movie. Hopkins enters his little mustang in an absurdly long (3000-mile) race in Arabia. It’s very hot. There’s a woman competitor, of course, an English aristo (Louise Lombard) who does the perfidious Albion bit. Along the way various Arabs kill each other; it isn’t clear who or why. Eventually Hopkins wins. It’s pretty long and boring, quite frankly.
At one point an old gentleman in an Arab headdress appears and you think he looks like Omar Sharif, then he smiles that gap-tooth smile and by Jove, it is Omar Sharif. He’s a sheikh, of course.

There really was a Frank T Hopkins, and he really did enter such a race in 1890. He is said to have ridden dispatch for Generals Miles and Crook, and hunted buffalo with Cody. He became a famous endurance racer. You can read his biography on frankhopkins.com if you want. The screen Hopkins bears little resemblance to the real one, though. Not that that matters.

Buffalo Bill (JK Simmons) and Annie Oakley (Elizabeth Berridge) are in it briefly because the hero appears in Cody’s Wild West. There’s a subplot about Wounded Knee.

The photography is very good, I will give it that. The cinematographer was Shelly Johnson, who did Jurassic Park III.
It was written by John Fusco, who wrote the brace of Young Guns. It was directed by Joe Johnston of Jurassic Park III and Captain America ‘fame’. 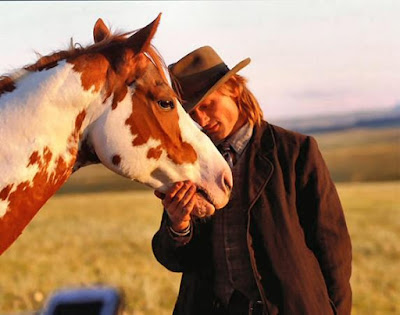 The horse is one if those annoying ones who is ‘intelligent’ and comes when his master whistles. A sort of runty Trigger.
All in all, though, e-pards, my advice is to skip it.