Victor Mature’s last Western was a satisfactory if not great one. He was an unlikely hero in a Stetson, matinée idol and sword-and-sandal expert that he was, but after surprising everyone when John Ford chose him as Doc Holliday in My Darling Clementine in 1946 – and stunningly good he was too - he acquitted himself in four other oaters with some skill: Fury at Furnace Creek was a tight little noir Western in 1948; The Last Frontier was not perhaps Anthony Mann’s finest work in 1955 but it has quality nevertheless; yes, Mature was faintly ridiculous as Chief Crazy Horse the same year (though it was actually an interesting picture); and then came Escort West, a little cavalry Western of some merit (though some flaws). So it’s a short but not at all bad career in the saddle. He was back to swords afterwards and never did another oater, being anyway more interested in golf than acting. 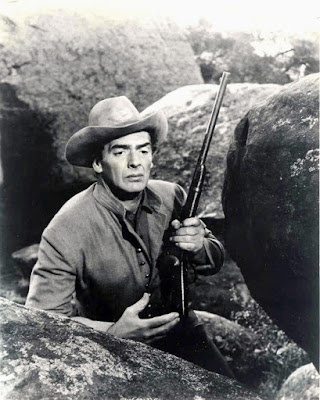 Victor matured into a solid Western actor
Escort West was made by John Wayne’s Batjac company, and Duke brought to the project the best ever Army unit you could wish for: Troopers Harry Carey Jr., Leo Gordon and Ken Curtis were commanded by Corporal Slim Pickens and Lt. Noah Beery Jr. Beat that. Only Ben Johnson was missing – he was busy being a Captain in UA’s Fort Bowie - though Dobe’s character was called Travis in a sort of homage-cum-in-joke. 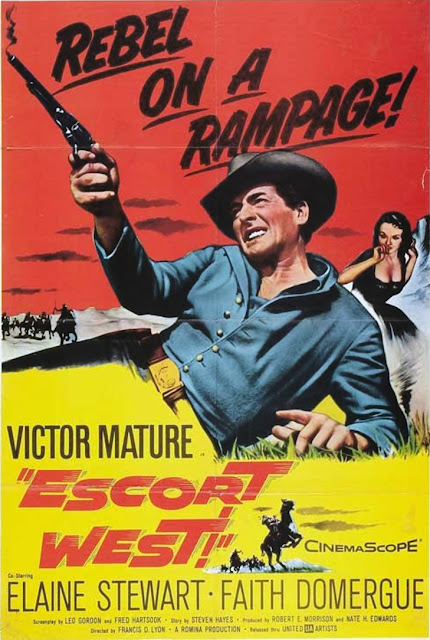 I wouldn't say he was on a rampage but that's posters for you
It was co-written by Leo Gordon. As well as being one of the best Western heavies ever, Leo also penned quite a few big- and small-screen oaters (mostly small) and very competent they were too. His co-writer was Fred Hartsook, who had done the screenplay for the Joel McCrea Western Gunsight Ridge the year before, for the same director. 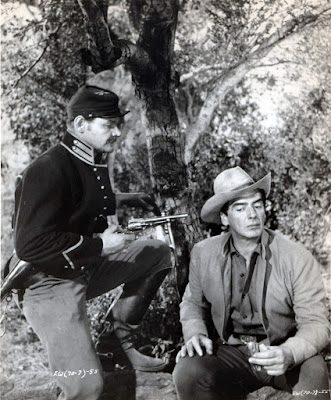 Leo Gordon gets the drop on Vic. Well, Leo wrote it so he could do what he wanted.
This director was Francis D Lyon. He was no John Ford, I fear. He was an editor (his first Western work was editing Red River, no less, so respect) who turned his hand to directing and later did a solid job on Disney’s The Great Locomotive Chase. Towards the end he did TV work, especially Laramie and Tales of Wells Fargo episodes. He did reasonably well on Escort West, it must be said, though struggled to manage pace and tension.

Francis D Lyon
It’s the story of an ex-Reb captain (Mature) who rather cheekily goes by the name of Lassiter. It’s Nevada, 1865, just after the end of the Civil War, and after the death of his wife, Lassiter is taking his daughter of maybe twelve or thirteen, Abbey (Reba Waters), to Oregon to start a new life. They encounter a mix of kind welcomes and ugly scorn. They meet up with Capt. Poole (William Ching, at the end of his slightly less than stellar career) who is escorting two posh dames to Oregon too. These are the sisters Beth and Martha, who are different. Beth (Elaine Stewart, often a vamp or temptress but here demure and sweet) is polite, gentle and kind, while Martha (Faith Domergue, who curiously insisted that her name be pronounced demure) is a veritable pain in the posterior.

The sisters, Domergue and Stewart
Ms. Domergue’s part was a thankless one as she had to be perfectly foul throughout, arrogant, snobbish, foot-stamping and superior. A Howard Hughes, er, protégée, she was supposed to be the new Jane Russell but her career faltered. She descended into B horror pics then TV work. She did a lot of Westerns though and I think she was quite good at the genre. See for example The Duel at Silver Creek, The Great Sioux Uprising or Santa Fe Passage – all admittedly iffy B-Westerns but she isn’t at all bad in them.


We kinda guess right away that Vic’s going to end up escorting Elaine and Faith to safety in hostile terrain and sure enough it turns out to be that good old brave-hero-saves-Eastern-ladies-from-Indians plot. That one goes right back to Fenimore Cooper but was still going strong in 1958, and indeed still is. 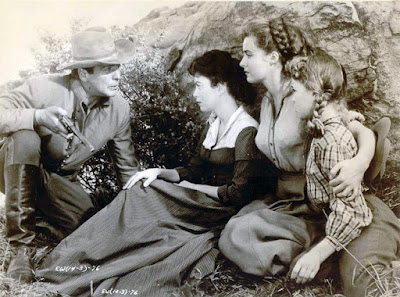 The oldest plot in the business?
There are definitely similarities with Fox's Delmer Daves-directed The Last Wagon of two years before. Francis Lyon was no Delmer Daves though.


The Indians are Modocs, which is a nice change, though they look like standard Apaches from central casting. Their chief is Tago (X-Brands), and Wayne stuntman Chuck Hayward is another. A couple are even real Indians, such as Eddie Little Sky, though not, I am sure, Modoc. They are typical Hollywood Indians, however: threatening renegades whom it is quite OK to shoot down. 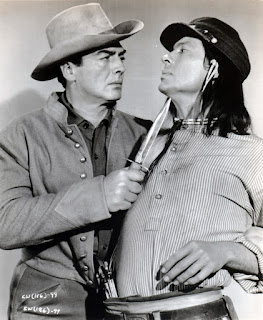 Our hero comes face to face with the Modoc chief. You are unlikely to have a problem guessing who wins.
After Noah Beery, the best actor in the picture is Rex Ingram who plays Nelson, the black mule-skinner who survives the Modocs’ attack which decimates his troop. Lassiter sets his broken leg and he is carried on a travois (it must be hell to act from a travois) as they try to get away (though of course nasty Martha suggests leaving him behind). Later he sacrifices himself nobly to save the others, taking a pesky Modoc with him, though. Ingram had famously been Jim to Mickey Rooney’s Huck Finn but he only did this and one other Western. Pity. 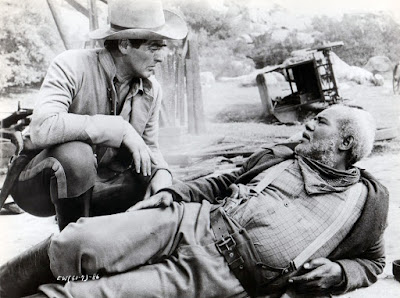 Rex Ingram, very good
There’s a moving bit of business with a cigar tin, and the cigar tin then becomes a handy bomb. If you watch the movie you’ll see what I mean.


L Gordon and K Curtis turn out to be bad guys (Leo, obviously) so Lassiter has to combat them too, as if a band of Modocs were not enough. But he bravely comes through, you’ll be relieved to hear. There’s a last-reel 1:1 showdown between Lassiter and Tago, as there was bound to be, and a huge rattler comes in handy.

Noah Beery, probably the best actor on the set
There’s love interest, natch. Beth is kinda engaged to Capt. Poole but she comes to love Lassiter. You may guess the outcome. Martha gets her come-uppance, though in extremis does ‘the right thing’. She’s not mourned by many.


The father/daughter relationship is done well, and Mature is tender towards the young girl. Reba Waters does a good job as the naïve and trusting daughter.


It’s all shot in CinemaScope but black & white, an unusual and interesting mix. Effective California locations were shot by the great William Clothier (doubtless another Wayne contribution) and there are some striking shots in the rocks of ‘Nevada’. 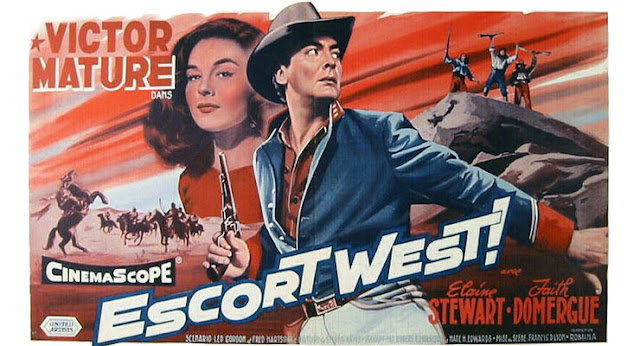 See it, but don't expect greatness
The film seems long (though it is actually only an hour and a quarter) and I think that’s because it’s rather episodic and the action not ‘unified’ enough. In fact one critic, Erick Maurel, has referred to ses laborieuses et interminables 75 minutes qui sont une véritable atteinte au plaisir cinématographique ou, au choix, un somnifère de premier ordre (its laborious and interminable 75 minutes which are a veritable attack on cinematic pleasure or, if you prefer, a top-quality sleeping pill). That does seem a bit harsh. It doesn’t drag for me, though I admit I’m not the most demanding of viewers. If it’s a Western I’ll watch it. And it does have a superb cast. Don’t get me wrong: it’s not a great film. But you could do worse than watch it.


That’s what I think, anyway.