Trinity is back (unfortunately)

Doc West is a Western made for Italian TV and first shown in Italy in 2009 but filmed in English in New Mexico.


It stars Terence Hill, who was also co-director. Mr. Hill started as Mario Girotti, a Venetian with a German mother. He was Count Caviraghi in Il Gattopardo (The Leopard) in 1963 but the following year started appearing in those German Karl May Westerns with Lex Barker and Stewart Granger. In 1967 he made his first movie with partner Bud Spencer and launched a career in slapstick-comedy Westerns, bringing the ancient Italian tradition of buffone to the genre. Many people (your present writer included) find these films singularly unfunny but they were very popular, especially but not only in Italy. In 1968 he was Django (but then who wasn’t?) and in the early 1970s reached the height (or depth if you prefer) in the genre with his movies, My Name is Trinity and Trinity is Still My Name. My Name is Nobody in 1973 was really the nadir. In the 1990s he did Lucky Luke pictures and TV shows and in 2009 he made two TV movies, Triggerman and Doc West, which were, as far as I know, his last Westerns to date. 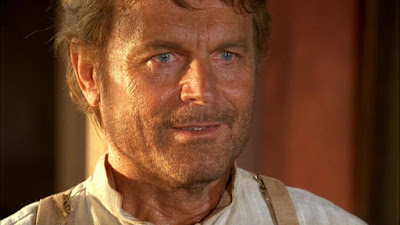 The good news is that in Doc West Hill moderated the worst excesses and lowest comedy of his earlier pictures. It’s a fairly straight made-for-TV movie with all that that implies. There is little knock-about (perhaps because he was 70 at the time). Of course he is still a superman, lightning fast on the draw and an eerily accurate marksman, and so forth. But it’s not as bad as those appalling Trinity movies.


It is very sentimental though. Several times it crosses over the border into the territory of heart-warming (than which there are few worse epithets) and it is certainly ‘family entertainment’ (sorry to tell you this). The sickly-sweetness is accentuated by the schmaltzy TV music (Maurizio De Angelis). People say politically correct things all the time, everyone has perfect teeth, they are nice to animals and children (except the bad guys, obviously). It’s a TV movie, in fact.


Hill wears his familiar costume of ratty shirt, long duster and low-slung gunbelt and is pretty dominant as the doc who has given up medicine and taken up gambling after operating drunk on a woman and causing her death. Of course we know he will be redeemed, probably by operating successfully on a saintly child.


Probably the best thing about the movie (though this is only relative) is Paul Sorvino from Goodfellas as the sheriff. We recognize his chunky frame right off. He acts the socks off anyone else on the set (including Hill). 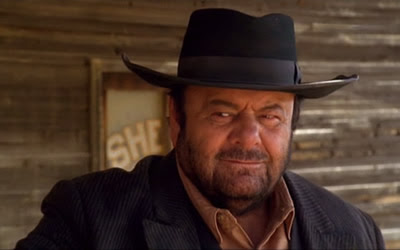 There’s love interest, obviously, and guess what, Virginian fans, Hill falls for a schoolteacher named Stark (Clare Carey). She’s only 30-odd years younger than he is so that’s OK. She actually has bad grammar for a teacher, but that's probably down to the writing, which is often anachronistic and always plodding.


At the end Doc West leaves town to ride off alone, the young boy he has saved shouting after him, Shane-like, but there’s a bit of an anti-climax when he is recalled. Now To be continued comes up on the screen as a really bad song about Doc West is crooned over the credits and our hearts sink as we understand that though many, many minutes have now passed, we are only at the end of part 1. 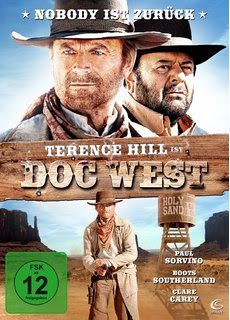 Part 2 is sub-titled Doc West’s Challenge, and it’s basically a poker-game movie. Among his many other superhuman talents, Doc is also the best poker player in the West, and he has to win the tournament to raise money for a hospital (I kid you not). Various contestants turn up (one is Ornella Muti) and the ritual rigmarole is gone through as one by one they are eliminated till Doc faces the really bad guy and, inevitably, wins.

Unless I misread Einstein, time is relative. And while the example sometimes given to prove this is that a minute spent with a girl on your knee flashes by in an instant while the same period sitting on a thumb-tack seems endless, I prefer to illustrate the theory with Westerns. Doc West is definitely (or should I say relatively) in the thumb-tack department.


There are many minor characters and subplots as the film meanders along. But essentially it’s a clichéd, bland TV show that can safely be missed.
Posted by Jeff Arnold's West at 8:29 AM