To me, there’s a difference between a bad man and a badman. While the former describes many (male) people, your present writer doubtless included, the latter is a specific Western entity, an outlaw, gunman or brigand. The title screen (at least of the print I saw) gives us Day of the Bad Man, while the poster has the rather more appropriate Day of the Badman. Anyway. 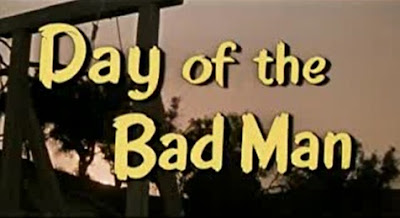 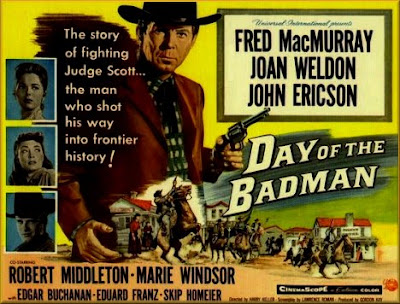 It’s a late 50s Fred MacMurray oater. Filmgoers of my generation (and possibly, dear e-pard, yours) can only really think of flubber when they see Fred on screen but actually he had quite a little sideline in Westerns, and was surprisingly good in them. He made 12 (not counting a couple of contemporary rom-coms with a slight Western tinge). Perhaps his biggest were The Moonlighter in 1953, a passionate affair with Barbara Stanwyck, and The Far Horizons in 1955 when he was Lewis to Charlton Heston’s Clark. Otherwise they were pretty well B-Westerns, for a variety of studios. They weren’t bad, though. See, for example, The Texas Rangers (1936), Gun for a Coward (1957) or Face of a Fugitive (1959). 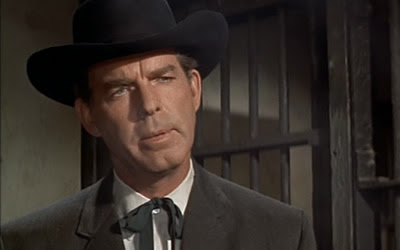 Fred in Westerns, surprisingly good
The screenplay of Day of the Badman (I’m calling it that) was written up (by Lawrence Roman) from a story by John W Cunningham. Cunningham of course wrote The Tin Star upon which it is claimed High Noon was based, and it is clear from early on in Badman that this movie is going to be a poor man’s High Noon. A sort of high eleven o’clock. There’s even a clock face shown, ticking away to the dread hour of eleven, when Judge Fred will pass sentence. 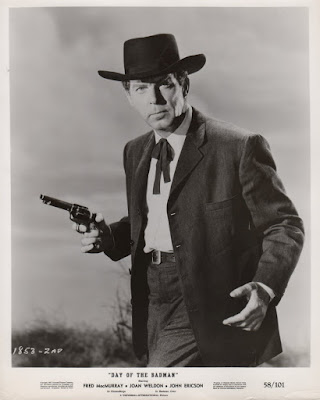 Fightin' Judge Fred
For Fred is not the marshal but a judge, in a rather dashing frock coat. He is about to sentence ne’er-do-well Rudy Hayes to death for first-degree murder. The thing is, though, Rudy’s brothers appear in town with the clear intent of helping him escape the noose. They are Robert Middleton, as paterfamilias Charlie (rather Ike Clantonesque) and Skip Homeier as younger brother Howard. Later they are joined by Monte (Chris Alcaide) and even cousin Lee van Cleef. So that’s four to have a showdown with, as in High Noon. 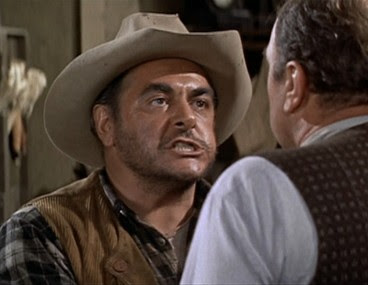 
Now, Robert Middleton, as well as being in pretty well every Western TV show you care to name at one time or another, was also in a heap of big-screen Westerns, from Love Me Tender in 1956 (when he was a very unlikely Charlie Siringo) onwards. Usually his ample frame was clothed in a suit and he was a crooked banker or cigar-chewing town boss, so it’s a surprise to see him here unshaven and in range duds doing almost an action-man bit. He’s good, though, and communicates smiling menace with panache. Skip Homeier had started as the sneering punk kid in The Gunfighter in 1950 and went on to corner the sneering-punk-kid market, but by 1958, now pushing 30, he was beginning to drop the kid part and concentrate on just being a sneering punk. Fred gets it right when he says, “Why, you squirt!” 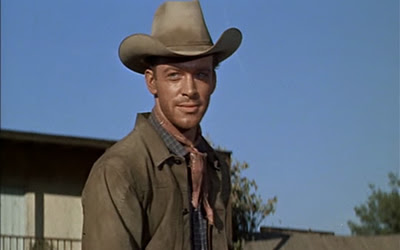 Skip doing his sneering punk act
There are some excellent character actors to back Fred, Rob and Skip up. 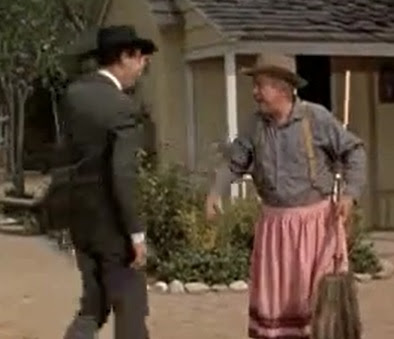 Edgar Buchanan is the judge’s factotum and friend, in a pink apron cleaning the judge’s new house so it is fit to welcome his bride-to-be, who is Joan Weldon from Them! Then there is ‘the other woman’, the less reputable one that the judge dallied with a year or two before, who is Marie Windsor. I always like to see Marie in a Western. Though she was best known for B-movie noirs (like being Elisha Cook Jr.’s double-crossing wife in The Killing) she was in a whole heap of big-screen and little-screen Westerns from 1947 to ’75. She was with John Wayne in The Fighting Kentuckian in 1949 and still with him in Cahill, US Marshal a quarter of a century later. You can tell she’s a bad egg in Day of the Badman because she kicks a dog in the first reel. 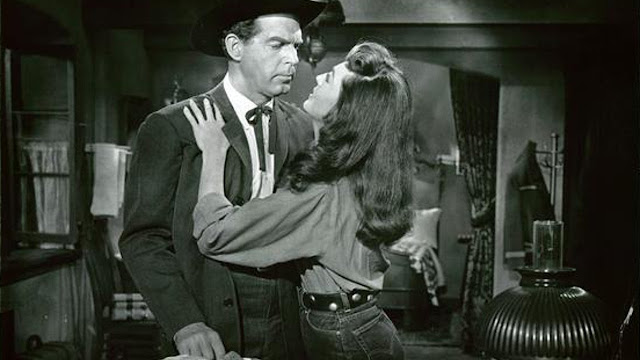 Marie Windsor is the racy 'other woman'
I must say, though, that neither of the ladies is Grace Kelly or Katy Jurado (their role-models).


John Ericson is the sheriff. Mr. Ericson had been Pete in Bad Day at Black Rock in 1955 and was still a relatively young and unknown quantity in oaters but he’d been good as Jack Slade's son in a dark, quality B-Western The Return of Jack Slade (which I must review one day). He’d also been one of the Drummonds in the trashy Forty Guns in 1957. In Badman he’s a cowardly sheriff who wants to back down from a fight with the Hayes boys and he’s also the judge’s rival for the hand of the fair Weldon, so he and Fred don’t exactly see eye to eye. 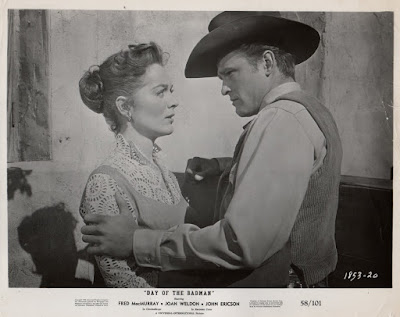 Will Joan go for the sheriff or the judge?
Peggy Converse is excellently malevolent as the vengeful widow of Rudy’s victim who wants “to hear his neck crack”. Kenneth MacDonald, Jack Perrin and Henry Wills are all just about spottable in uncredited bit-parts.

I must say, MacMurray is very good in this. He comes across as tough and decent but with just enough doubt and fear. He is shrewd enough to know and show that true courage is not fearlessness but rather being afraid and doing the right thing anyway.

The picture was directed by Harry Keller who had been a B-Western specialist at Republic but when that studio was on the rocks he moved to Universal, which even trusted him to reshoot certain scenes for Orson Welles's Touch of Evil, so he can't have been a duffer. He had directed MacMurray in a Western, Quantez, the year before and the two seem to understand each other.


Most of the action takes place in town and DP Irving Glassberg (Bend of the River) doesn’t have much scope for Universal’s usual high-quality location shooting, but it’s in CinemaScope and nice Eastmancolor so we get the odd pleasant bit of cinematography. The Hans J Salter music is also quite classy and I liked the way it alternated between pastoral/bucolic as Judge Fred was riding off to check out his new ranch home and menacing/discordant as the camera zoomed in on the villains following him. 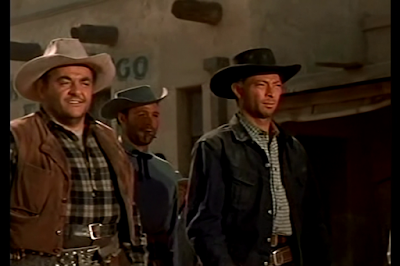 Van Cleef, always superb as the bad guy
There’s quite a good fight between Skip and the sheriff which Van Cleef (how brilliant he always was) settles with a bit of hickory, rather like Duke dealing with George Kennedy in The Sons of Katie Elder or Clint dealing out punishment in Pale Rider. And there’s a climactic shoot-out at the judge’s place with fire-bombs before Joan changes her mind about yellow Sheriff Ericson and comes running back to Judge Fred so that they may live happily ever after (with Edgar Buchanan, of course).


Recommended, in a B-Western kinda way.