B-Western actor Bill Cody (43 Western appearances, 1924 to ’43) might be thought to have assumed that very Wild-West name but in fact he was born William Joseph Cody in 1891 in St. Paul, Minnesota (some say in Manitoba, Canada). He was no relation to the great Buffalo Bill, but his birth name was a happy coincidence for a star of horse operas. He started as a stuntman and bit-part actor in 1922. Curiously, he adopted a stage name, Paul Walters, for his early roles; you’d think he’d want to make the most of his real moniker. 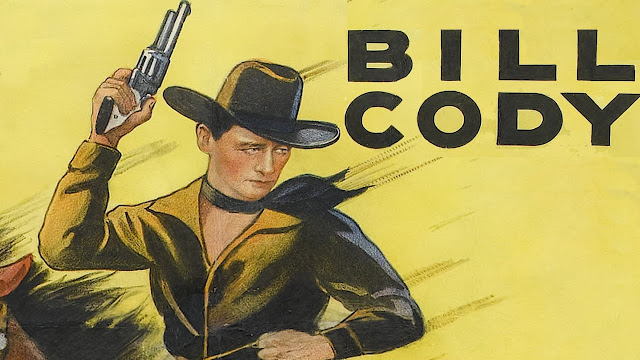 He looks a bit like John Wayne in the poster (he didn't really though)
Then Jesse Goldburg of small-time studio Independent Pictures decided to feature Cody under his own name in a series of eight silent second-feature Westerns starting in 1924. Cody created his own production company and from 1925 – ‘28 made B-Westerns released by Pathe. In 1929, he went on tour with the Miller Brothers’ famous 101 Ranch Show. Unlike many silent Western stars, Cody made the transition to sound quite successfully (in a minor studio way) and made Westerns in the early 30s for Monogram. As the decade progressed, Cody alternated work with circuses and Wild West shows with short movie contracts for real Poverty Row outfits. His Awyon Picture The Border Menace (1934) has been called (probably unfairly) "the worst B-Western ever made".


In 1934 Cody signed up with producer Ray Kirkwood to make a series of Westerns released by Spectrum Pictures, and his son Bill Cody, Jr. co-starred in four of them, beginning with Frontier Days (1934). Blazing Justice appeared in 1936, but without his son. Bill Cody Sr.'s last movie for Kirkwood, which also co-starred Bill Jr., was Outlaws of the Range later that year.

Cody’s final starring picture was The Fighting Cowboy (1939). That year he had bit parts in John Ford's Stagecoach as an uncredited rancher, and as a sheriff in the George O'Brien oater The Fighting Gringo. Bill Cody died at Santa Monica, California, in 1948 at the age of only 57.


Most of his pictures were, quite frankly, low-grade black & white 60-minute oaters with few artistic pretensions, aimed at a juvenile market. But they were fun, and Cody’s quite stocky frame was recognizable in them. He wasn’t at all bad at the ridin’ and fist-fightin’. 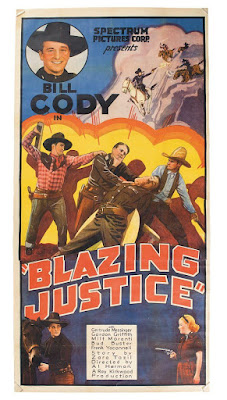 A very B Western
Blazing Justice was a classic example. It was directed by Albert Herman, a former bit-part Western actor who had started in Broncho Billy Anderson silents in 1914 and later became journeyman director who churned out dozens of Westerns from 1924 on. Through the 1930s he did Rex Lease, Ken Maynard and Guinn ‘Big Boy’ Williams pictures but Blazing Justice and Outlaws of the Range were his first (and last) with Cody.


It was written by Moroccan Zarah Tazil, an actress who also wrote a few B-Westerns. It’s pretty formulaic, though, and not helped by the wooden acting as the actors recite their unconvincing lines unconvincingly.


It opens with a song in the saloon from Rusty (Frank Yaconelli, a former vaudeville song-and-dance man who specialized in songs in B-Westerns) and soon Ray Healy (Cody) appears in hair suspiciously black and joins in the musical fare with Coming Round the Mountain. Then Ray, at the bar, declares that he doesn’t drink and doesn’t gamble and there’s a comic shooting contest with old-timer barfly Pop (Milburn Morante, another vaudevillian). It’s an unfortunate start. 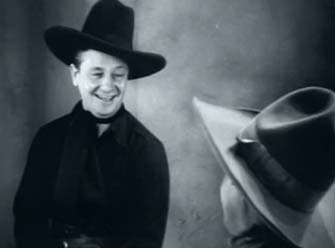 He looks a bit like Hopalong Cassidy here
Then the inevitable skullduggery begins. A sheriff bursts in on three rustlers in the saloon but is shot down by their boss, Max (Gordon Griffith, former child actor who had the honor of being the first ever screen Tarzan and Tom Sawyer). Max is obviously a villain because he has a small (almost Hitlerian) mustache. Ray launches himself at the three ne’er-do-wells with many fists flying and he captures two but evil Max escapes. Still, Ray has done enough to win the $5000 reward and he decides to go off on holiday. 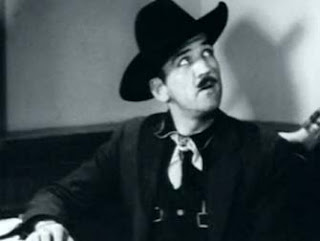 The evil Max
There is more ‘comic’ relief now as Pop argues with his horse Annabelle, and then comes across the evil Max out on the range and wins drinks from him with crooked dice and double-headed coin, though Max is of course a rotter and so welches on the bet. 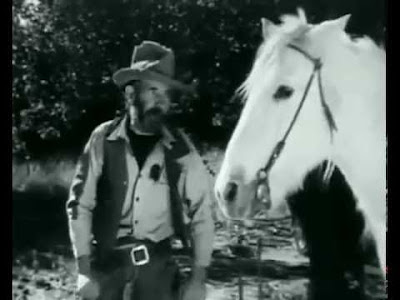 (Sub-)comic relief
Max and his henchpersons now hear that nearby rancher Peterson (Budd Buster) has withdrawn $10,000 from the bank to pay off his mortgage and Max robs and kills the old fellow. His glam daughter in jodhpurs, Virginia (Gertrude Messinger, 18 B-Western appearances 1932 - 40) pursues the villain but Max sneakily swaps horses with our vacationing hero Ray, and Virginia takes him in as the murderer. Uh-oh. 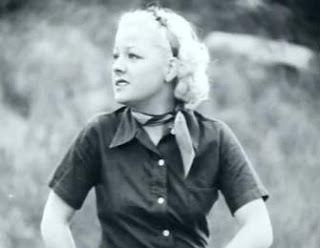 Rancher's daughter
Well, mucho plot follows (I will not thrill you now with the ins and outs). There are a lot of fisticuffs and a posse and ridin’ and shootin’. Ray hatches a cunning ploy to trap the villain Max and this succeeds admirably, allowing him to lasso Max, return the stolen money and propose to Virginia in the last scene.


To be brutally frank, it’s unoriginal, weakly acted and cheaply staged. Doubtless the undemanding children in the audience were pleased enough but their mums and dads may have dropped off somewhere in the second reel. I didn’t, though. I’m still at heart a kid in the cheap theater seats thrilling to the gallopin’ and shootin’.