Lambert Hillyer, the director who worked so often and so closely with William S Hart, claimed that Wagon Tracks was the inspiration for Paramount’s The Covered Wagon four years later. It may have been at that. It is in any case a classic wagon train movie with Hart as the brave and resourceful captain and guide. It is also a first class Hart Western and a high-quality film. 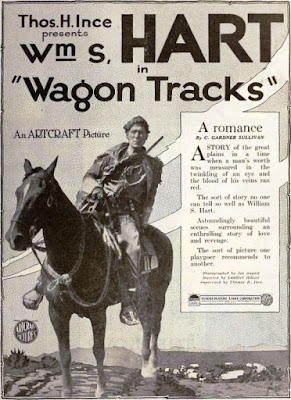 A fine movie
It’s a little different in some ways: it’s set quite early for one thing, 1850, and Hart appears in buckskins and coonskin cap. And he does not play the good badman redeemed by the love of a good woman that he usually did.


Like many of Hart’s pictures at this time, it was produced by Thomas H Ince and photographed by Joe August, so two of the giants of early motion pictures were involved. It really does repay a watch, and for a true Westernista, it is really essential viewing.


The original print ran 78 minutes but a 64-minute Kodascope version is more usually seen. The quality of the print on my DVD (Alpha Home Entertainment) isn’t that good and the film would ideally be remastered but it’s more than watchable and you can appreciate the fine cinematography.


Another attractive feature is the rather beautiful captions, which are elegant to look at and poetically phrased without being purple prose. The wagon train is described as a white-sailed armada and after velvet nights and purple we have the first faint ribbon of the dawn.


The story starts in two ways, skullduggery by card-playing rogues in suits on a Mississippi riverboat intercut with the wholesome life of a decent buckskin-clad Westerner. Hart (in a tan) is that Westerner of course, Buck Hamilton, “true son of the new Empire”, and his goody-credentials are immediately established by his talking kindly to his horse and mule (those who are nice to children or animals in the first reel of Westerns are always the good guys). Further east, though, we see a man named Merton, in Victorian-melodrama villain whiskers, cheating at cards with his accomplice Washburn. Their victim is an honest medical student, Billy Hamilton, who, it later transpires, is our hero’s young brother, just back from his medical studies back East. Now the first reel of this movie is especially good because it features a derringer. The pocket gun is palmed by Merton and used to kill Billy when the lad tumbles to the dastardly plot. It’s rather a modern-looking derringer for 1850 but we’ll let that slide.


The thing is, though, that Washburn’s sister, Jane, who is in the room next door, is shocked and confused, and her bad-egg brother and her fiancé, the skunk Merton, let her believe that she has shot the poor boy. She is distraught and tells the sheriff she didn’t mean to do it. She is allowed to go and later realizes what happened but keeps silent to protect her brother and fiancé. Still, she is ashamed and traumatized by the affair. The two ornery critters don’t care; they have got away with murder. 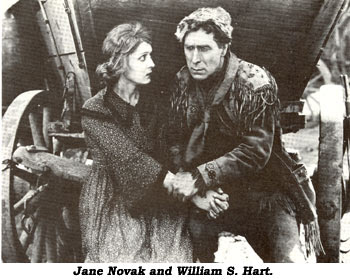 Merton, the derringer owner and Jane’s intended, is played by Lloyd Bacon. Bacon was an interesting chap. Born into a stage family, he switched to being the stuntman and heavy in Broncho Billy Anderson Westerns (he did 17). After World War I he moved into comedies and was a gag writer. He started directing in the early 20s, joining Warner Bros in 1925. He directed Warners’ big-budget Moby Dick in 1930. Westernwise, two Hart Westerns (this one and Square Deal Sanderson) followed his 17 Broncho Billy ones, and in 1921 he was in a Tom Mix oater, Hands Off! He directed the musical Western Cowboy from Brooklyn, with Dick Powell, in 1938, directed Cagney and Bogart in The Oklahoma Kid in ’39, and he finished by directing a Jeff Chandler number for Universal, The Great Sioux Uprising, in 1953 (rather a clunker, I fear). 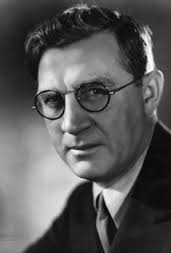 Lloyd Bacon
Jane Novak was the female lead. She was a well-known silent star and did five Westerns with Hart. He proposed to her but when she refused him their professional relationship ended as well. The same year as Wagon Tracks she also appeared with Tom Mix in Treat ‘em Rough.  Years later she had a bit part in Anthony Mann’s The Furies (1950).


The brother is Robert McKim, later Douglas Fairbanks’s rival in the silent Mask of Zorro, and young Dr. Billy is Leo Pierson, who was born in Abilene in 1888 so had good Western roots.


Buck arrives at Council Grove in time to grieve tragically over the corpse of his bro. He is remarkably forgiving to the gal who shot the boy. This part of the movie is too long and too slow. But then Buck is elected cap’n of a wagon train heading off down the Santa Fe Trail, and Jane, her fiancé and brother are all part of the train. Well, there are the usual wagon train adventures. The wagon carrying the water crashes and there is a prolonged period of heat and thirst. Hart gives his precious water ration to his dogs, horse and mule, and Jane looks admiringly on, “understanding for the first time what true manhood means.”


She falls in love with the noble Buck, and cannot but reveal the truth to him. She spills the beans about the murder. Buck’s face sets in a hard expression (which Hart specialized in) and he determines on a ruthless plan to get the villains to admit their guilt. He takes them both out on foot into the desert, without water, until one, the brother, breaks down and blurts out that Merton shot Billy. Meanwhile, the Kiowas have taken a hand. They, “insolent but inclined to be friendly”, have come to the wagon train and one pioneer has shot dead a brave who was fingering the shawl of his wife. The Kiowas demand a life for a life, or they will attack at dawn and annhilate the travelers. Uh-oh. Now Buck arrives back and guess who is chosen as the sacrificial lamb to give to the Kiowas? Why, evil Merton, of course. 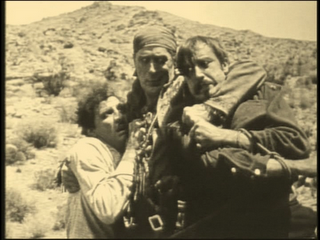 Buck forces the villains to admit the truth (that's Lloyd Bacon on the right)
Finally, they get to Santa Fe where Jane is met by her uncle. You think Buck and Jane are going to live happily ever after but nay, Buck shakes her hand, says, “Good-bye, Miss” and sets off back to lead another wagon train, a solitary rider on the Western plains, “the Empire builder”. Fin.


So you see, classic stuff. By the standards of the time Hart doesn’t actually overact all that much (though he hams it up unmercifully by modern standards) and there is a certain ponderous dignity about the story. The DVD has Dvorak’s New World symphony dubbed onto it, which helps give a certain appropriate grandeur to the film.