I suppose a silent movie is a good place to have as hero a silent man. William S Hart had already been ‘Silent’ Haskins in a 1915 one-reeler. In 1917 he was The Silent Man. And of course traditionally Western heroes have always been taciturn. They’ve never been gabby (apart from Gabby). The strong silent type was later taken to an extreme by Clint Eastwood grunting in spaghetti westerns. But it really started with Hart. 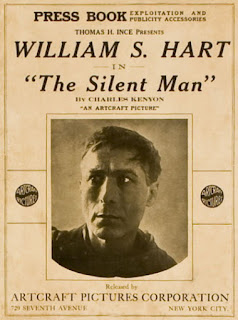 A classic Wm S Hart Western
The Silent Man was one of Hart’s first pictures after his signing a profitable deal with Famous Players-Lasky, soon to become Paramount Pictures. Hart himself directed, Thomas Ince produced and one of the all-time-great cinematographers, Joe August (later to work with John Ford), was behind the camera. It was a feature film of over an hour and was one of the Westerns from Hart’s golden period. And the print has survived better than many other Hart oaters: the one on my DVD (Alpha Home Entertainment) is really rather good. 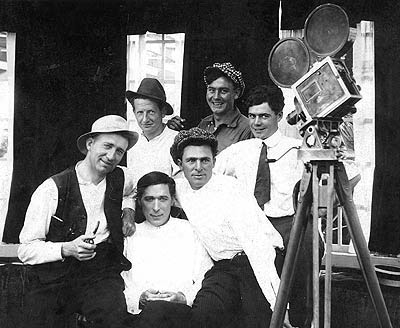 That's Joe August standing next to the camera. Hart is seated, center.
IMDb tells us that the movie was premièred at the majestic Million Dollar Theater in Los Angeles, one of the first movie palaces built in the US, opened in February 1918. Among the stars to turn out at the première were Mary Pickford, Charlie Chaplin and Lillian Gish, as well as hundreds of eager fans who waited in line for two blocks.


Hart is ‘Silent’ Budd Marr, a gold prospector in “the region that God cursed and left unfinished: a vast mysterious sea of wind and sage”. Hart Westerns often highlighted the harshness of the frontier terrain. We are shown "Primordial desolation, a huge waste shunned by beast and bird, fostering only a poisonous life of a hiss and fang.” Straight away we know Budd is a good guy because he does not shoot a rattler and then talks kindly to Nicodemus, his horse (no sign of Fritz in this one). Budd has struck it rich and, arriving in the town of Bakeoven with his gold dust, enters the Hello Thar saloon, whose owner is Handsome Jack Pressley, played by Hart regular Robert McKim – he’d been in Hart Westerns since 1915, including major pictures such as Hell’s Hinges and The Return of Draw Egan. Saloon owners are often, even usually the villains and this one is no exception. He runs crooked poker and roulette games as well as the slinky Topaz (Dorcas Matthews) and a string of ladies of the night, surprisingly explicitly referred to for the time. 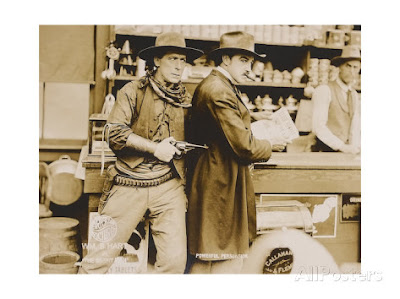 In the Hello Thar saloon, Silent Budd and Handsome Jack
Once in the Hello Thar, though, Budd at the bar orders water. Old-timer Grubstake Higgins (JP Lockney) tells him that “thet thar liquid, stranger, war designed by natur’ to run under bridges and for the chinks to wash clothes in” but it doesn’t stop Budd ordering a refill.


Well, Handsome Jack is in cahoots with crooked town boss Ames Mitchell (Milton Ross) and together they hatch a plot to get their evil hands on Silent Budd’s claim. They cheat him out of his money (Topaz signals to Handsome Jack what cards Budd has) and there is a fight in which Budd lands up in hospital. When he gets out, Grubstake recommends that he get back to his strike pronto – claim jumpers are around. Sure enough, when Budd returns to his claim, he finds he has been cheated out of that too. He turns to stage robbery. There is a price on his head. 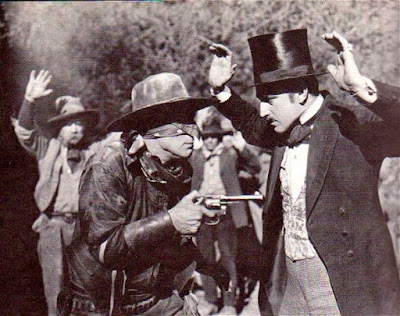 Silent Budd holds up the stage
Now, there is love interest, of course. Handsome Jack has been romancing the gorgeous Betty (Vola Vale, a beauty who appeared in several Hart Westerns) but Betty prefers Budd. Unlike Handsome Jack, Budd is respectful to women and treats Betty as a lady. When Budd holds up the stage which is carrying gold from his claim, who should be aboard but Handsome Jack and Betty, with her little brother David (Harold Goodwin). Budd kidnaps Betty (politely, of course) and takes refuge with whiskered old clergyman Preaching Bill Hardy (Griffiths regular George Nichols) but the mob, whipped up by Handsome Jack, burns the church, in a Hell’s Hinges-like scene. 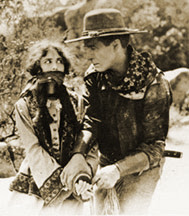 Budd kidnaps Betty - politely, of course
Now Budd realizes he can’t go on, and he allows Betty’s brother David to take him in for the reward on his head. There is a trial, at which old-timer Grubstake reveals himself to be an undercover US marshal with proof of Handsome Jack’s guilt and Budd’s innocence. Now the fickle mob want to lynch Handsome Jack but decent Budd and the marshal hold them off. It all ends happily with Handsome Jack revealed as a bigamist and Budd and Betty in nuptial bliss presided over by Preachin’ Bill. That’s a lot of plot packed into the hour.


There’s rather nice solo piano music dubbed onto the DVD and the whole package is high quality. Sure, it’s all pretty corny for our modern seen-it-all cynical eyes, and the acting is hammy by today’s standards but if you can take it for what it is, it’s definitely worth a watch. Give it a go, e-pards. 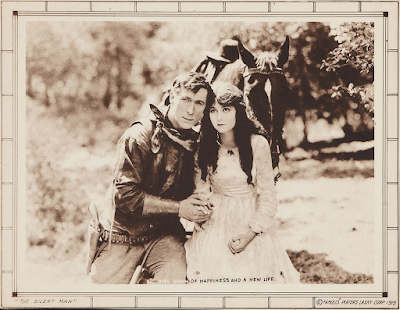