Wyatt Earp tries to clean up Tombstone - but fails

Hollywood has long been fascinated by the story of Wyatt Earp. The whole ‘town-taming marshal’ plot has always been a mainstay of the Western genre, and Earp became the exemplar. The first named Wyatt Earp as movie lead (there had been a cameo Wyatt in William S Hart's 1923 Wild Bill Hickok) was Randolph Scott in Fox’s Frontier Marshal, but the story had been used well before that. Wyatt died in 1929 and members of his family were still very much around (and jealous of their rights) and so earlier tales of Earp cleaning up Dodge or Tombstone couldn’t use the Earp name. 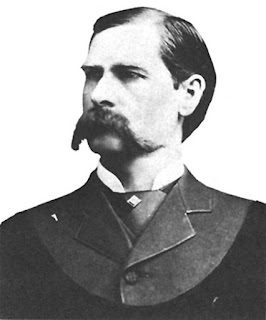 WBS Earp (1848 - 1929)
In 1930 William P Burnett published a novel, Saint Johnson, a tale of brothers’ vengeance in Tombstone that did not mention the Earps by name but was clearly an account of their exploits. Hollywood sat up and took notice. Law and Order, starring Walter Huston, went into production at Universal.


Soon the Earp movies were flowing out of Hollywood: the first Frontier Marshal, starring George O’Brien as ‘Michael Wyatt’, came out in 1934, the Randolph Scott one appeared in 1939, and Earp movies and TV shows have been coming out ever since.


Brian Garfield, the Delphic oracle (actually, he was a bit too outspoken to be Delphic), said in his masterly guide Western Films of the 1932 Law and Order, "[T]his may well be the definitive Wyatt Earp movie." For years I have not seen it: it’s still not, as far as I know, available on DVD. But recently a kind reader, David Lambert, told me that it was now up on YouTube. And I am so glad I could watch it. Here’s the link if you want to see it: https://www.youtube.com/watch?v=SEiendPhZ2M 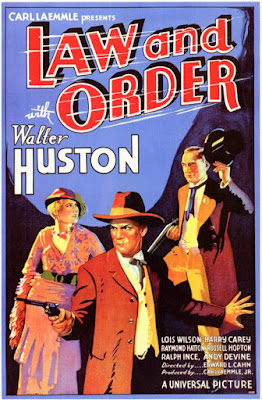 Splendid
It’s a superb film, and I think Garfield had a point. The first thing you notice is the influence of William S Hart. The picture moves slowly and Huston verges on the ponderous sometimes. There is a darkness about it, with most scenes shot at night or in the gloom. Huston is magnificent. He had of course been a powerful Trampas in the first talkie The Virginian in 1929, and he had followed that with a classic good-badman tale when he was Pancho Lopez in The Badman in 1930. Law and Order was his third Western. He didn’t do a huge number of them in his career but he was really powerful in the ones he did. He dominates Law and Order much as, we like to think, Wyatt Earp dominated the town of Tombstone. He is Frame ‘Saint’ Johnson, the man who cleaned up Kansas and, as one character says in hushed tones, “the killingest peace officer that ever lived.” His nickname is also explained: “Looks more like a preacher than a two-gun man,” says one denizen of the saloon. “That’s how he got his name,” replies his pard. 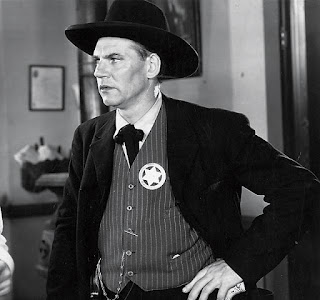 Walter Huston as Earpish Frame 'Saint' Johnson
Harry Carey Sr. was the Doc Holliday-esque Ed Brandt, Frame’s sidekick. Carey was always splendid and in his frock coat and top hat (which he wears even on the trail) he is especially so. He is a firebrand, always wanting to have at ‘em with his sawn-off shotgun. He isn’t called Doc and doesn’t cough. He’s a slick gambler and Wyatt’s (sorry, I mean Frame’s) best buddy. Amazingly, this was Carey’s 97th Western (he had started in 1910). 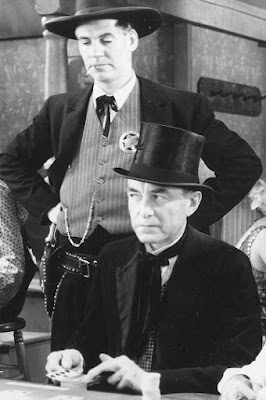 Harry Carey as the Doc Holliday-esque Ed Brandt
Frame has two other sidekicks, his brother Luther, whom he calls Lute (Russell Hopton) and Deadwood (Raymond Hatton). Best known as a fast-talking urbanite, Hopton didn’t specialize in Westerns. He’d had a small part in a Buck Jones oater the year before and he did a few B-movies afterwards. He isn’t bad as the Morgan Earp figure. He perishes in the gunfight at the OK Corral. Ray Hatton, however, was, as I am sure you know, a dyed-in-the-wool Westernista. Like Carey, he had started in the early days (in fact in the 1914 The Squaw Man) and appeared in over 200 Westerns. Later in the 1930s he was Rusty Joslin in the Three Mesquiteers series. Deadwood is also shot to death at the OK.


The Northrups are the Clantons. Poe Northrup (Ralph Ince) and his two brothers, slimy Walt (Harry Woods) and drunken Kurt (Richard Alexander) are murdering rustlers in league with the crooked Sheriff Fin Elder (Alphone Ethier), the Behan figure. We see the Northrups railroading Elder through in a corrupt election, murdering a man who dares to suggest he might not vote for him. The Northrups have pretty well treed the town of Tombstone, which is a sink of iniquity.


Good old Russell Simpson is the judge who begs Frame to wear the badge and clean up the town. I always like Russell. Actually, he had been Trampas too once, in the 1923 silent The Virginian. Frame at first says no – he has earlier declared, “I wanna put my shootin’ irons away for good” – but is persuaded by the judge when Poe Northrup threatens him. You don’t threaten Wyatt Earp.


The movie starts with a potted history of the West in which three dates are chosen, 1840 – a pioneer wagon train and Indians, 1869 – the railroads and outlaws, and 1889 – the Oklahoma land rush. Then a card reads, “In the wake of the pioneer came a backwash of lawlessness which gave birth to the gun-man. Weak men were made strong by (sic) the aid of leaden death.” This seems to imply that Earp’s Tombstone days were after 1889 but never mind. It’s corrected with a picture of Rutherford B Hayes (President 1877 – 81) in the saloon.


The saloon is introduced with the ideal scene because it shows a man at the bar showing some other fellows a new derringer (and you know how obsessed I am with derringers). It goes like this:


So you see already the movie is sky-high in my estimation.

Fab
The clean-up-the-town notion is established early, even before Frame gets to Tombstone, because while on the trail with his pards he blames the sixgun for the lack of law ‘n’ order. He says that the sixgun “even makes skunks brave”. Later, he grandly pronounces, “Someday the sixguns will all be put away and this will be a fit country to live in.” I’m afraid we’re still waiting for that day, Frame, and the sixguns are now semi-automatic. Huston was talking in the era of gangsters and gangster movies. The New York Times review called the movie “a roaring melodrama” and added that “it is one of the goriest exhibitions of shoot-em-down gunplay since the gangster and machine-gun era.”


The parlous state of law and order in Tombstone is underlined by the presence, power and prosperity of two splendid twin-brother undertakers, the Parkers (D'Arcy Corrigan and Nelson McDowell) who look almost as cadaverous as their clients. 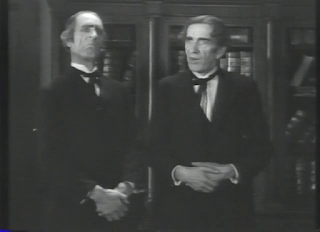 The Parker brothers
I even spotted a young Walter Brennan cleaning the spittoons. Well, I guess we all have to start somewhere. Actually, let me correct that: Walter Brennan was never young. It was already his tenth Western, in fact (he started in the silent days).


Another enjoyable appearance is Andy Devine as Johnny ‘Behind the Deuce’ Kinsman. He even looks thin! Well, not fat anyway. He’s already got that trademark high-raspy voice. Frame stands off a lynch mob on Johnny’s behalf but then has to hang him when Judge Simpson sentences him to death. Most unfortunate, but a lawman’s gotta do what a lawman’s gotta do. Johnny doesn’t seem to mind when he is told that he will be famous as “the first feller to be hung legal in Tombstone”. Devine had had a micropart in the Tom Mix version of Destry Rides Again the same year (as Stage passenger, uncredited – scenes deleted, so it was not exactly fame and glory) but Law and Order was his first proper Western role. It was the start of a long and glorious Western career. 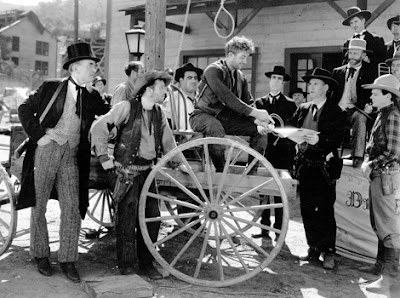 Andy Devine is cheerful
There was to have been a female lead and indeed Lois Wilson appeared on the posters but all her scenes were cut before release and so it’s a very male picture.


The director was Edward L Cahn. Cahn started as an editor at Universal but is best known for his later work as director, especially the schlock sci-fi movies he did in the 1950s. This was his first Western, and probably the biggest. He did a few more in the 1950s and early 60s but they were all forgettable B-movies. He has quite an original touch in Law and Order and there are some interesting scenes, though you wonder if Huston had more to do with that than Cahn did. 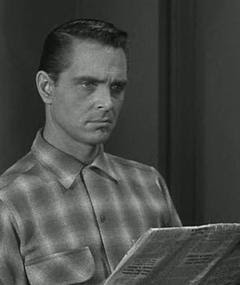 Edward L Cahn
Well, Frame deputizes his pals and introduces a gun ordinance (Brandt even has the nerve to confiscate a derringer from a lady of the night) but gun law or no, there’s plenty of shootin’. Brandt is shot rather in the Virgil Earp fashion but unlike Virgil, expires soon after. Frame grits his teeth and cries revenge. The climactic gunfight at the OK Corral (more in the OK livery stable, actually) is snappily edited (that’s Cahn’s influence, one supposes) and fast, but confused and dark. Perhaps because of the quality of the current print, you can see various people are getting shot but you can’t quite see who. It turns out to be everyone except Frame, who doesn’t quite throw his star in the dust at the end but almost, and leaves town, wounded and alone. He had told his dying brother, “You were right, Lute, they don’t want peace.” 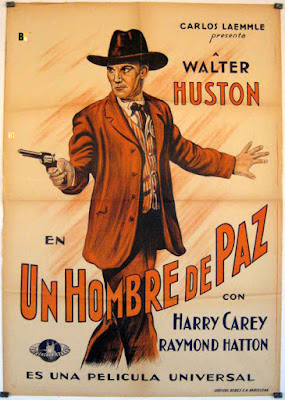 Nice Spanish poster
The movie was written up from the Burnett novel by Walter Huston’s son John, still in his twenties and later to direct The Unforgiven, The Misfits and The Life and Times of Judge Roy Bean.


The movies ends with the cast. We had that at the beginning but as it says on the screen, “A good cast is worth repeating…”


Law and Order is in fact a splendid movie, at least for a serious Westernista (and if you are not a serious Westernista, why are you reading this blog?) I've given it a Jeff Arnold four-revolver rating, no small achievement, pards. There was a remake in 1940 with Johnny Mack Brown and Fuzzy Knight, and another remake, in color, in 1953,with Ronald Reagan as Frame. The Walter Huston one was re-released as Guns a’Blazin’. Neither remake was any good. Watch the Walter Huston one. You won’t regret it. And thanks, David.