This post revises and replaces the one of August 8th, 2013.

In 1950 audiences were treated to a movie which showed white racist Indian-haters in a very bad light and Indians as noble, with a wise and statesmanlike leader. Broken Arrow was shown and became a hit. 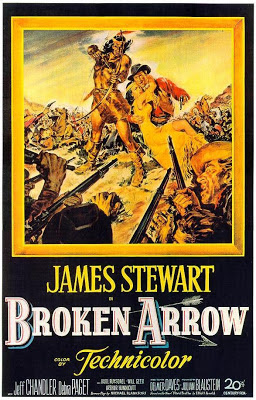 One of the many ways in which the Second World War had a big impact on popular culture in the US was that we were all told how repressive and racist the Fascist powers were, and how tolerant America was by comparison. White GIs served alongside ‘ethnic’ ones (there weren’t too many black or Jewish soldiers in Hitler’s or Hirohito’s armies) and found to their surprise that they were just like them. Hollywood began to consider making movies which reflected this. Anti-semitism was the first target, with Fox’s Elia Kazan-directed Gentlemen’s Agreement with Gregory Peck in 1947. Then Kazan did another anti-racist picture for Fox, this time about discrimination against black people, Pinky (1949).
It was inevitable that Westerns would ‘borrow’ the cachet, and anti-Indian feeling was after all a mainstay of the genre – Indians were brutal savages, right? As anti-Communist hysteria grew – and it was especially virulent in Hollywood – some liberals graduated to Westerns because those movies contained a presumption of patriotism and they were set ‘safely’ in the past. Contemporary racism could be treated with near impunity, they thought – though of course as it turned out it didn’t stop movie people being blacklisted and hounded out of their livelihoods in witch-hunts.


Broken Arrow was a good example: credited to Michael Blankfort, it was in fact written by the blacklisted Albert Maltz. Blankfort must have had mixed feelings when he was nominated for an Academy award...


I haven’t employed the overused word seminal to describe Broken Arrow because a seminal movie is one that sowed the seed for a whole genre or type of film. In a way, John Ford paved the way for a wise Cochise, worthy warrior adversary of John Wayne, in 1948 in Fort Apache. Ford was going some small way towards making up for all of his previous Westerns in which Indians were just nameless hordes to be shot down in droves by the white hero. Furthermore, filmed before Broken Arrow but released afterwards, Devil’s Doorway had dealt with similar themes to Broken Arrow. Noirmeister Anthony Mann ’s first foray into the Western (and what a great Western director he was going to turn out to be) was probably a better film than Broken Arrow. Certainly it was more radical, stronger and more uncompromising.


And even Devil’s Doorway wasn’t the first pro-Indian Western. In the early days of the genre there had been many films which highlighted the plight of the Native American at the hands of the encroaching white man. In the 1910s Thomas Ince, in particular, produced several pro-Indian silent movies. Well-known feature films such as Ramona, The Squaw Man and Zane Grey’s Vanishing American were made and remade all through the silent era. But Devil’s Doorway and Broken Arrow were a worthy 1950s corrective to the Indians of the Stagecoach kind, who were just whooping savages threatening the lives of brave white men.


Broken Arrow was directed by Delmer Daves, his first Western. Daves’s career ran in close parallel to that of Anthony Mann. Born in the first decade of the twentieth century in California, he released his first (pro-Indian) Western in 1950, used James Stewart as his star, made his last Western in 1958 with Gary Cooper in the lead, and in between made some first-class pictures. Though never Oscared, he was a director who composed his pictures beautifully and was noted for the cinematography, and whose Westerns were uncompromising and tough. Sounds like Mann, doesn’t it? 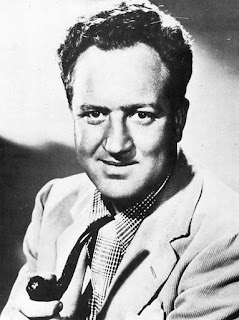 Delmer Daves
Daves used James Stewart as lead. Stewart, the naïf, bumbling Jefferson Smith going to Washington or the whittling, anecdotal Tom Destry Jr. in Shinbone, deliberately and suddenly in 1950 turned into the hard, driven, tough Western hero who appeared in Broken Arrow and Mann’s Winchester ’73. It was an amazing transformation. One of the reasons for which Darryl Zanuck, head of 20th Century Fox at the time, held back the release of Broken Arrow (which was actually shot before Universal's Winchester) was to see what reception Winchester would receive from the public. Would they accept James Stewart with a gun? But he needn't have worried: the Western movie had gained a huge new star, to rival John Wayne, Gregory Peck and Henry Fonda – if not quite Coop. 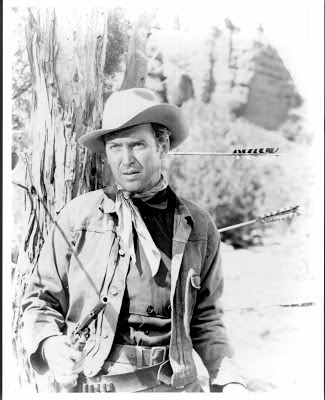 Unlike Winchester, Broken Arrow was in fine color and the photography was exceptional. Filmed on location round Flagstaff and Sedona in Arizona, with studio sets kept to a minimum, the movie glows with beauty. From a visual point of view, Ernest Palmer, director of photography, who was Oscar-nominated for this film, gave us one of the finest Westerns of the era. William H Daniels’s cinematography for Mann in Winchester ’73 was very good – a chiaroscuro black and white that suited the psychological Western it was - but photographically speaking, Broken Arrow is even better.


Stewart’s performance as former army scout, now stage line owner Tom Jeffords is the equal of his Lin McAdam in Winchester. In Broken Arrow, Jeffords is a man committed to an ideal and prepared to do anything to achieve it. The real-life Jeffords was perhaps slightly less altruistic; he spoke to Cochise to protect the profits of his mail business, and what’s wrong with that? But the real Jeffords did indeed journey alone into Cochise's camp, become blood brother of the chief and have his mail riders protected. He was clearly a decent man. Stewart gets it right, perfect in fact. 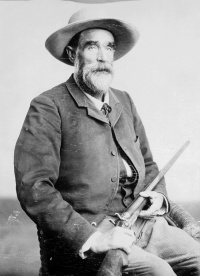 Jeffords later became a stagecoach driver, a deputy sheriff in Tombstone, and finally a gold prospector. He lived out the last 22 years of his life in the Tortolita Mountains north of Tucson, AZ.


In fact, all the actors are very good here. Burly New Yorker Jeff Chandler is excellent as Cochise. It must be very hard for a white actor to portray an Apache chief without relapsing into “Me Cochise, you white man” ug-speak. Chandler goes way beyond that to provide a moving, powerful performance which shows Cochise as a real statesman. Daves cleverly has him change his clothes when Jeffords first goes to see him: first seen in obvious 'Indian' costume, when Jeffords appears he wears softer clothes, in tones matching Stewart's, as he comes round to Jeffords's point of view.


Debra Paget, only 16, is truly beautiful as Stewart’s (fictional) Indian bride Sonseeahray, despite the overdone make-up. I don’t know if the costumes were authentic but they are certainly very graceful. If anything she was probably too good to be true. Devil’s Doorway also contained an inter-racial romance. While this raises few eyebrows these days, in 1950 it would have been termed miscegenation, and would have been viewed with shock or even abhorrence by many. But Broken Arrow’s example is ’safe’: Paget’s Indian maid is beautiful, she is subservient to the white male (always wanting to learn his ways and become ’civilized’), and anyway she is soon killed. However, in Devil’s Doorway, the affair is between an Indian man and a white female, and in those days the man was still considered the dominant partner in a marriage. This ‘redskin’ would be ‘taking’ a white woman, and that certainly would have been viewed with disapproval by many in the audience. It is another example of how Mann’s film is more radical and daring than Daves’s. 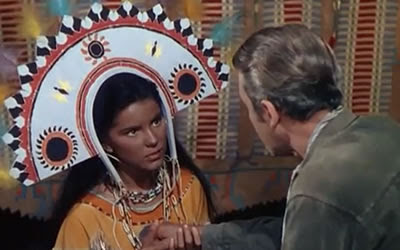 Debra Paget made rather a thing of Indian maids
Certain critics, especially Native American ones, have argued that Indians should have been used in these parts, and they have a point, especially when one considers that whites played the 'good' Indians while Geronimo and the 'bad' Indians were played by Native Americans. This was a subtle kind of racism, unintentional, perhaps, but nevertheless insidious. But there are problems with this argument: acting and plays were alien to the Indian tradition. There was no corps of Indian actors waiting in the wings. And, worse, the financers of movies were very unlikely to use unknown 'ethnic' actors in Hollywood films when bankable white actors with known names were available. You can hardly blame Daves. 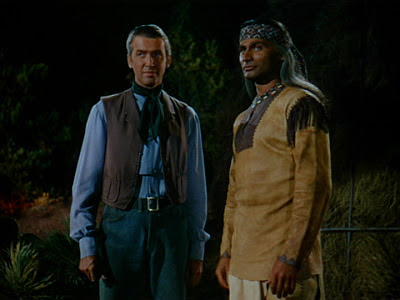 Jeffords and Cochise in statesmanlike deliberation

In fact, Chandler rather cornered the market on Cochise roles. He was Cochise again in The Battle at Apache Pass (a kind of prequel) in 1952 and in the weak sequel Taza, Son of Cochise in 1954.

Of the rest of the cast, Basil Ruysdael is fine as sage General O. O. Howard, known as ‘Bible Howard’. Jay Silverheels (‘Tonto’) plays an angry Geronimo with conviction and power. He was Geronimo in several other movies too. Will Geer (Wyatt Earp the same year in Winchester ’73) here plays the Indian-hating heavy Ben Slade. John Doucette is the nasty muleskinner who whips the mob up into trying to lynch 'Indian-lover' Jeffords. Good old Arthur Hunnicutt is there too. So the cast is strong.


The writing is first class. It has an authentic ring to it. In his foreword to the 1947 source novel, Blood Brother, Elliott Arnold wrote that he researched the story carefully and most of the book was based on accurate history. He used records left by Jeffords himself. The novel deals with the history of Cochise from 1855 to his death in 1874, whereas the movie begins the story in 1870. The character Sonseeahray was invented by Arnold (no relation, sadly), and built up in the movie. 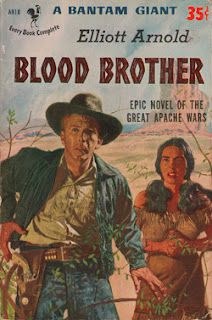 The film, more than the novel, has quite a 'white' take on events, and Daves softens (probably necessarily) the almost anti-white-American sentiments of the book. Stewart is in nearly every scene and even when he isn't there's a voiceover narration by him. So the focus shifted. It's really the story of Jeffords more than Cochise.


The movie has a sudden and weak ending in which Stewart is told that the loss of his wife Sonseeahray will seal the treaty, and he is supposed to say that’s alright then. He’s left as though saying, “You mean the movie is over?”

So the Daves-Maltz work was not quite so revolutionary or even particularly pioneering as some have suggested. But it was released as the first Hollywood talkie, aimed at adult audiences, to make an intelligent pro-Indian case. It was a box-office and critical hit. And it had a huge influence on the genre. When Jeffords announces regretfully, "Apaches are wild animals, we all said," he is clearly including in that 'we' 1950 audiences as much as characters in the film.


[And by the way many great Westerns, even ones as good as TheSearchers or Red River, had last-minute weak endings. It doesn’t detract from a fine film.]


Delmer Daves loved the symbolism of the river, and it is no accident that key events in this film take place at the river's edge. When Jeffords takes Sonseeahray as his bride, the couple cross the almost Rubicon-like river to their honeymoon wickiup. Geronimo's attack on the stagecoach takes place at the river and this is mirrored by the ambush led by firebrand Ben Slade (statesmanlike Jeffords and Cochise both suffer from hothead-renegade fringe groups determined on violence) which leads to Sonseerahay's death.

Broken Arrow became an ABC TV series from 1956 through 1958 with Tom Jeffords played by John Lupton and Cochise by Michael Ansara, which wasn't all that bad. Sam Peckinpah wrote three of the episodes. Ansara and Lupton as Cochise and Jeffords on TV

After Broken Arrow and Devil’s Doorway, movie makers were no longer able to portray Indians as just ‘redskins’ to be shot down while circling wagon trains, whooping - or at least they were only able to do that in non-serious B-Westerns.


Americans were suddenly made to think.