Since we are on early Tom Mix one-reelers, another couple, both from 1916.


5,000 Dollar Elopement is another comedy short, typical of Tom’s output at this time. It co-stars his lover, Victoria Forde (they were to be married in 1918 when both had won contracts from Fox) as well as Tom’s eternal sidekick and bosom pal Sid Jordan. As the title suggests, Tom and Vicky are in love and want to wed, but Vicky’s miserly and vigilant dad (Joe Ryan) objects (“he’s got as many eyes as a seed potato”), so they decide to elope. 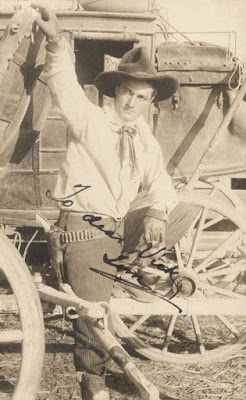 A portrait of Tom dedicated to Vicky
The plot thickens when a couple of varmints (one is Sid) rob Vicky’s dad’s home. They know he has withdrawn $5,000 from the bank to buy cattle, and they want to get their evil hands on it, so they turn up in a wagon at night (with some rudimentary day-for-night shooting) and sneak inside. Now, ready for the elopement, Vicky thinks she’ll play a joke on Tom and hide in the elopement wagon to surprise him, but guess what? Yup, she gets the wrong wagon, and conceals herself in the robbers’ one. Oops. The badmen flee with both loot and fiancée. 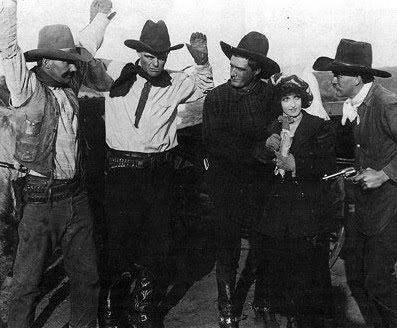 The robbers are apprehended. That's Sid in the white shirt, next to Tom & Vicky.
Well, Pa has lost five grand and Tom has lost his true love, so they decide to join forces and pursue the villains together, in Pa’s buckboard. They catch the rogues up, Tom makes a good stunt leap from buckboard to wagon, and the thieves are halted. Pa wants to take Vicky home but Tom is clear: you got your money back, old man, and I got my girl. It’s fifty-fifty. So they all lived happily ever after (except the robbers). The End. Good stuff. 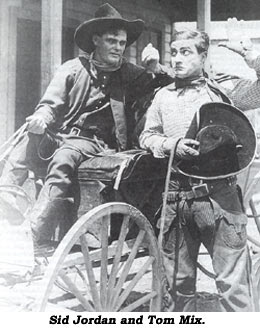 (In 1913, by the way, there had been another silent movie, The One Hundred Dollar Elopement, but that’s inflation for you).


In Legal Advice, however, released the following month (Mix made about one of these movies a week) and with pretty well the same cast, Tom falls for a lady lawyer new in Dareville (Vicky was usually an Eastern lady come West) and so he steals the sheriff’s horse, rides it into the saloon and shoots up the town in order to get her to defend him. His plan is to get himself released on bail into her custody. Well, Sid ropes Tom with a deftly thrown lasso and Tom duly lands in jail. It then turns out that lawyer Vicky has a husband already. Tom shoots himself. The End. 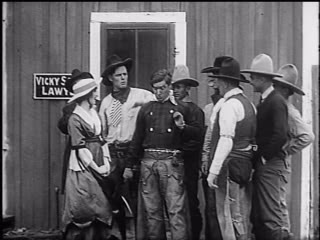 Tom aims to woo lawyer Vicky Sands by getting released on bail into her custody
As with all these pictures, we cannot accuse them of being sophisticated rom-coms. Still, they are entertaining, in a pretty basic way. There’s a lot of slapstick (for example when the cowboys build a new cabin for the lawyer) and some entertaining ridin’ and shootin’. And, well, it’s Tom Mix, after all. You can’t dislike Tom Mix.