Westerns loved The Man from… titles. They gave us stories about the man from Laramie, Arizona, Dakota, Utah, Monterey, Colorado, Del Rio, all over the place, even Nowhere. Man from Westerns started very early. The Man from Texas is an early Tom Mix two-reeler, from the time when Mix was working for ‘Colonel’ Selig, writing, directing, starring in, and to all intents and purposes producing a long series of rapidly-produced Westerns.


We sometimes think of the more light-hearted Mix ‘replacing’ William S Hart’s more serious Westerns but Mix first starred in a Western in 1910, while Hart didn’t start till 1914, and the two careers moved in parallel, with Mix’s going on much longer, into the mid-1930s (of course Mix was considerably younger than Hart).


The Man from Texas, already Tom Mix’s hundredth Western, is a classic example of a Mix oater. It opens with a title card telling us, “In the days when a quick-draw and a quicker trigger finger meant life or death in the fraction of a second - ” so we see right away that we are in the cinematic equivalent of a dime novel. It’s the story of a cowhand, Texas (Mix), who receives a letter from his sister with a photograph of the base villain John Hargrave (Ed Brady, a Mix stock-company regular), who has deserted her (she later pines to death). Texas determines, naturally, on vengeance so he tells his boss, in a rather gangsterish fashion, that he is going off “gunning for a rat”, and sets off to Montana to obtain said revenge.

Popular in Germany
We are now introduced to a rich rancher’s daughter, Moya (another Mix regular, Goldie Colwell) to whom the odious Hargrave is now paying (unwanted) attention. Indeed, had Texas not intervened in the nick of time, I think Hargrave would have had his wicked way with her. Later, Hargrave tries to eliminate Texas by shooting at him from ambush (the skunk) and the bullet whizzes through Tom’s Stetson. In those pre-special effects days you can bet that someone (probably Tom’s bosom pal Sid Jordan) actually shot a bullet through his hat. That was routine for Mix. Anyway, badman Hargrave doesn’t profit from it because Texas, in a rather anti-climactic moment it must be said, shoots him dead. The sheriff is watching and immediately exonerates Texas on the grounds of self-defense (even though in reality Texas had come there expressly to “gun” the “rat”). The sheriff, by the way, is Sid. 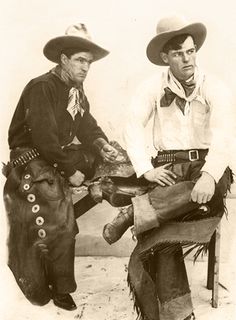 Tom Mix and Sid Jordan
The story is rather episodic because it could well have ended there, with Texas getting the girl, and it would have done in a one-reeler, but now other things happen, lengthening the film. Now the sheriff sets his cap at Moya, and becomes Tom’s rival. They are friendly rivals – at first – and shake hands, may the best man win and so forth, but soon Sheriff Sid does the dirty on Texas and, in person, invites Moya to the dance even though he knows Texas has already done so by letter. Sadly, we don’t see the dance (dances weren’t too effective in silent movies, though that didn’t stop a lot of them). Moya really desires Texas but agrees to marry Sheriff Sid out of what is called, on another intertitle card, “a woman’s pique”. Moya’s dad, though, will only agree to the match if Sid shows he has got at least $2000.


Enter a slimy Mexican (bad guys were often Mexicans or half-breeds in these pictures) who, in the saloon, says he has a dead-cert scheme to make the needed boodle, namely to rob the stage from Saddle Creek. The stage is a nice four-up Concord, and it slithers daringly down a steep slope before being held up by Sid and the Mexican. Tom and Sid fight and Sid is captured but the Mexican escapes. The Mexican corners Moya in a cabin and again looks to have his wicked way with her but once more Texas rides to the rescue and the Mexican is captured. 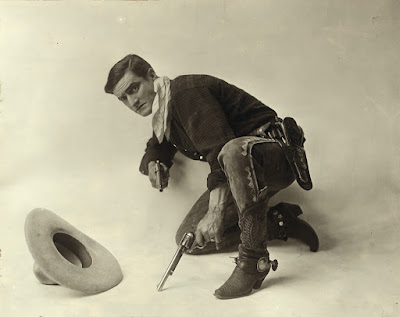 The great Tom Mix
Once again, the story could end there, but it resumes with another plot: now the ranch foreman (Leo Maloney) sets his cap – or Stetson – at Moya (she must be getting fed up with all this attention). She rejects him rather forcefully; in fact she fires him and runs him unceremoniously off the ranch, which was a bit uncalled for, I think, because he was very polite and always took his hat off when he talked to her. He is rather cross and with a few pals starts up a rustling gang. Texas, who, we are told, has been elected sheriff “through his proven fearlessness and popularity”, determines to foil the rustlers and he recruits some deputies (including Hoot Gibson) to do that. The rustlers grab Moya and hold her for ransom, so yet again Tom has to rescue her (this is becoming repetitive). Unusually, though, the rustlers shoot Texas, wounding him, and escape, and the movie suddenly ends, probably because they couldn’t think of another way to save Moya from a fate worse than death.


If you want to see a typical early Tom Mix short(ish) Western, this one will do perfectly well for you – as would any of the other 41 he made that year, though many of those have been lost, sadly. This one is available on DVD.


Not sure if that's Tony or Blue, though. Looks like an ordinary pony. 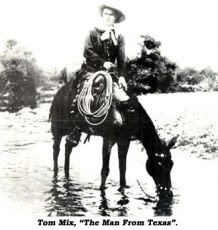