Quentin Tarantino enjoys the Western genre. He has spoken highly of Rio Bravo, for example, and also goes in for 1960s and 70s spaghetti westerns, poor soul. He produced From Dusk Till Dawn 3: The Hangman’s Daughter (a Mexican horror-Western) in 1999, appeared in a poncho as a character named Ringo in Sukiyaki Western Django in 2007, and of course wrote, directed and appeared in Django Unchained in 2012. The Hateful Eight is, we are told on screen, his eighth film. I suppose this means as director, although it is not entirely clear which the other seven are, perhaps Reservoir Dogs, Pulp Fiction, Jackie Brown, Kill Bill 1 and Kill Bill 2, Inglourious Basterds and Django Unchained. Anyway, it’s another big, colorful bloodfest. 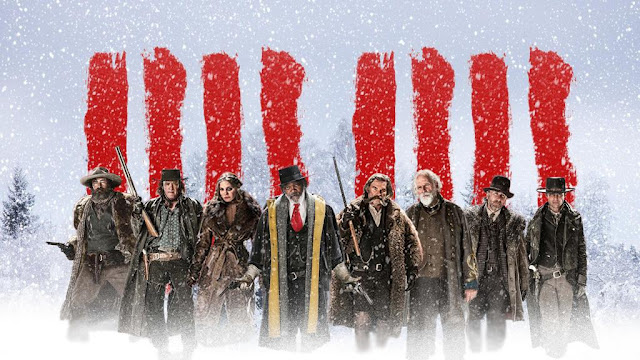 It was shot in 65 mm and shown first in 70 mm UltraPanavision, in a ‘roadshow’, like John Wayne’s The Alamo. In about a hundred theaters in the US, with giant screens, audiences got a longer version, a program, intermission and numbered seats. But of course far more saw it in ordinary movie theaters, and far more still will see it on TV screens (it’s just come out on DVD) which won’t be the same, even with those big TVs we all have these days. Visually, it certainly is a fine picture. Widescreen suits Westerns (as Budd Boetticher showed); it highlights the lone rider in a vast empty landscape, for example, though 80% of The Hateful Eight is an interior theatrical set-piece so there doesn’t seem to be that much point in the wide-widescreen, but that’s Mr. Tarantino for you. Such outdoor scenes as there are (mostly in the first reel) are splendid, however, shot by Robert Richardson in a sort of washed-out blue & white. It’s what I call a Snow Western, set in Wyoming (shot in Colorado round Telluride). Mr. Richardson shot Basterds and Django Unchained, and has also worked with Martin Scorsese, as well as being DP on The Horse Whisperer, so he knows a thing or two about cinematography. I think both he and Mr. Tarantino had seen Silvano Ippolito's cinematography on Sergio Corbucci's Il Grande Silenzio. And maybe also William A Wellman and William H Clothier's shooting on Track of the Cat - which also alternates huge snowy landscapes with a lot of static rather theatrical in-studio work. 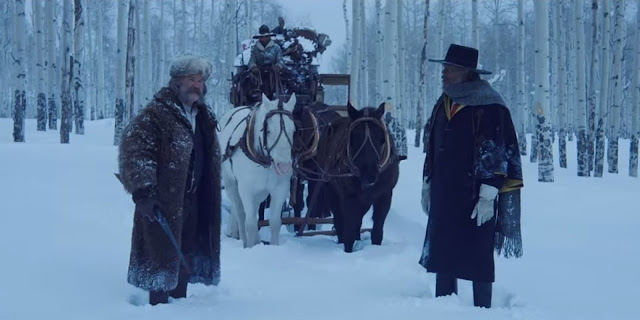 As you may guess from the title (also rendered as The Hateful 8 and The H8ful Eight) all the characters are horrid. Hateful is a curious word, isn’t it: it can mean that a person is odious or that s/he is full of hatred. Well, in this case, it’s both.


We open with a scene of bleak snowy mountains and a crucifix half-covered with snow. The music is dark, atonal, sinister. It’s by the muzakmeister Ennio Morricone which surprised me because some of it is quite good. Later Ennio can’t resist going into spaghetti mode (I suspect Mr. T. couldn’t resist it either) with (d)jangly guitars, whistling and shouted hoots, you know how they do, so that’s all a bit grim, but much of it is rather different. It certainly creates an atmosphere in the snowy outdoors. Morricone did the music on Il Grande Silenzio, of course. 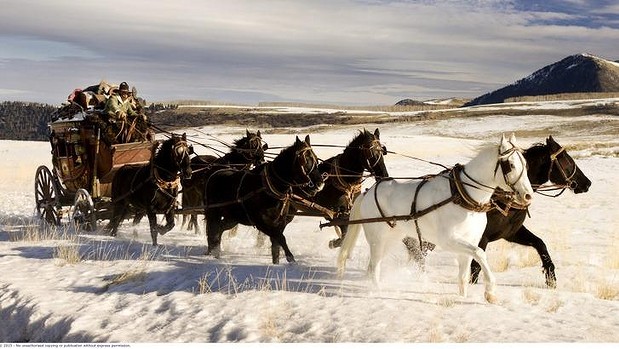 A stage appears, a six-up Concord driven by one O.B. (James Parks, one of the trackers in Django Unchained, fourth-billed in the upcoming Palominas and The Hard Ride both expected next year) with a rather Ozzie hat with corks dangling from the brim. Like all proper stage drivers, OB is crusty and feisty. It’s a Butterfield stage in a post-Civil War story but never mind. On board is mustachioed and brutal bounty hunter John Ruth, known as The Hangman (Kurt Russell) with his murderous prisoner Daisy Domergue (pronounced dommerg-you, unlike the actress Faith Domergue who always insisted it be pronounced dah-mure) played by Jennifer Jason Leigh in her only Western to date – a rather thankless part in which she seems only to be there to be beaten. The unofficial lawman is known as The Hangman because he doesn’t shoot his victims, even if there’s a dead-or-alive bill out on them, but rather saves them for the noose, which ceremony he likes to watch. This was of course Tarantino's homage to (or rip-off of) the 1959 Robert Taylor Western The Hangman. Another bounty hunter, named (presumably in homage to Gunsmoke writer Charles) Marquis Warren (Samuel L Jackson), afoot in the snow, hitches a ride from the reluctant Buntline Special-armed Hangman. He is, it turns out, an ex-slave turned Union major who has committed atrocities in his campaign to get back at the evil South. The abundance of bounty hunters may be yet another reference to Il Grande Silenzio. 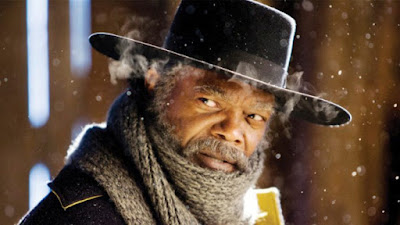 Later, yet another horseless fellow appears in the snow and also inveigles his way onto the coach. It is Chris Mannix, son of a Rebel guerrilla leader and recently appointed sheriff, he says, of Red Rock, the town they are headed for (where Daisy is to be hanged). Mannix is played by Walton Goggins. So now we are up to 50% of the hateful eightsome, because OB doesn’t count, not being, one presumes, hateful enough. 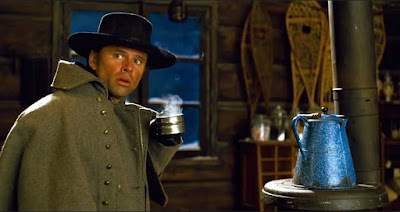 Now with Messrs. Jackson, Russell and Goggins aboard we know we are in for a treat. Mr. Jackson, a Tarantino regular, is very well known. Westernwise, though, he was the creepy Uncle-Tom butler in Django Unchained and that’s it. A pity, because he has a natural flair for the genre in my view, in a modern violent way anyway. He’s terrific in this movie, and is really the star of the show. Mr. Russell, on the other hand, is a tried-and-tested Westernista. He started as a small boy when he was Jaimie McPheeters back in 1963 and its 1965 big-screen spin-off Guns of Diablo. He was a regular on many different Western TV shows, especially The Quest, and then of course he was Wyatt Earp in Tombstone in 1993. In 2015 he starred in Bone Tomahawk as well as The Hateful Eight – in which he is very good, I must say. He speaks Wayneishly. As for Monsieur Goggins, he was the transgender prostitute Venus on Sons of Anarchy, had a small part in Cowboys & Aliens and was Billy Crash in Django Unchained. He has a memorable face and voice and is altogether excellent, I think.


Well, after a lot of Stagecoach-style talking (it’s a talky Western) we now arrive at a waystation, colorfully called Minnie’s Haberdashery. And the action moves indoors – also because there’s a violent blizzard brewing. We enter the territory of claustrophobic interiors with threatening characters, familiar to Western fans everywhere. It’s reminiscent of Fox’s 1951 Rawhide or, with winter outside, the 1952 The Outcasts of Poker Flat (again, Fox). Bad guys take over the stage halt in Columbia’s 1956 The Tall T. There are many other examples for Mr. T to draw on. We get relationships, talk, and plot development. And, because it’s Tarantino, we get timeshifts and flashbacks.


The stage halt (which is like the Tardis in its interior dimensions and reminds me a bit of Claudia Cardinale’s joint in Once Upon a Time in the West) is being run by a Mexican fellow (Demián Bichir), which rouses suspicions in the major. Where are the owners? Well, The Tall T is a clue as to their whereabouts, a hint which dyed-in-the-wool Westernistas will get and those poor creatures who do not know that movie will have to guess. This Mexican actually turns out to be Mexican Bob the outlaw, and once again, Western fans will get the reference. And if you don’t, well, come on, dude.


Inside, we have the delight of Bruce Dern, one of the best Western badmen ever, now looking a little anno domini (he’s entitled), as in Django Unchained, and just as nasty as in that movie too. He’s a Confederate general who doesn’t take kindly to the room being invaded by a n***** (the n-word is used freely, as is Mr. T’s wont). How I have admired Mr. Dern in Western after Western since he first appeared as EJ Stocker in episodes of Stoney Burke in 1962. My favorite is probably The Cowboys where he was truly hateful (hell, he even shot John Wayne). 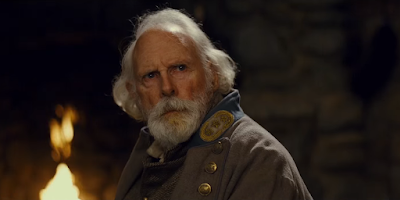 Along with Bruce there’s Tim Roth, another Tarantino stock company member, speaking in a faux-posh English accent. He says he’s Oswaldo Mobray, the hangman – the official one, not a bounty hunter – and he will officiate at Daisy’s farewell party. You sorta feel this part was written for Christopher Waltz. 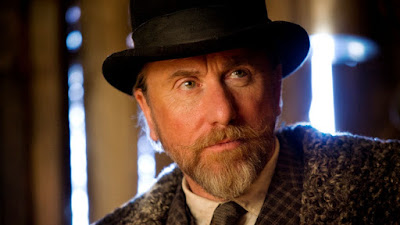 And there’s a gunman-cowboy, Joe Gage (Michael Madsen from Reservoir Dogs and Kill Bill). So then there were eight. But none of these characters, you feel, is really who he says he is. 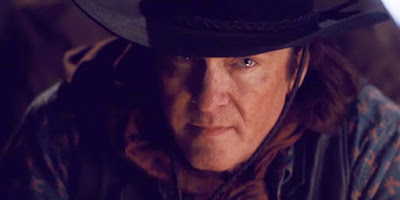 There’s an ongoing gag about “the Lincoln letter”, a precious epistle from Abe which the major holds. Tarantino shines a holy light on the paper the first time we see it, on the stagecoach, and other characters revere it (though not Daisy). There’s another gag (rather worked to death, actually) about having to nail the door shut each time someone goes in or out.


The mystery thriller aspect takes over now as poison is administered (we know not by whom – yet), and certain other members of the Eight, along with sundry other characters who appear in the latter part of the epic, are gradually, gorily and gruesomely eliminated by gunfire, if you’ll pardon the alliteration.


The Hateful Eight isn’t as ‘clever’ as Tarantino’s other films and is also more depressingly nihilistic and, well, nasty. The director talks on the making-of part of the DVD about making a ‘heritage movie’ but I think that’s rather presumptuous. It’s not good enough for that, regardless of the number of millimeters the film stock has. Matt Zoller on rogerebert.com writes, “We're just watching a bunch of scorpions in a bucket getting ready to sting each other, then stinging each other.” There is of course a risk that if you are going to make a movie in which all the characters are hateful, then the movie might be hateful. You know, it’s just a thought. 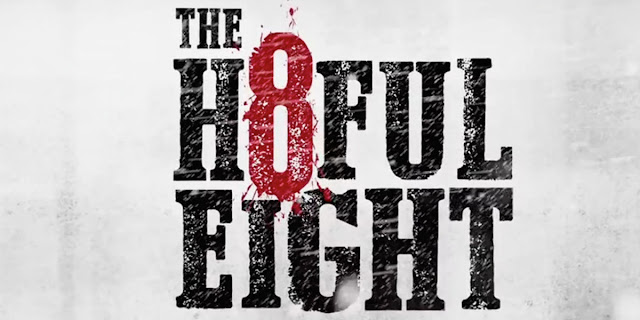