In May 1960 John Wayne began shooting North to Alaska, a commitment he had with Fox, as soon as he had wrapped The Alamo but before it was released, and he was busy working on his own big picture even between takes on the new movie. He was also working on setting up The Comancheros (1961) so it was a bit like juggling, trying to keep all these projects going at the same time and not drop the ball. But he needed the money. The Alamo had taken up most of his reserves and then some. North to Alaska was to be a comic romp set in 1900 in the goldfields round Nome and in some ways was a trial run for McLintock! (1963). 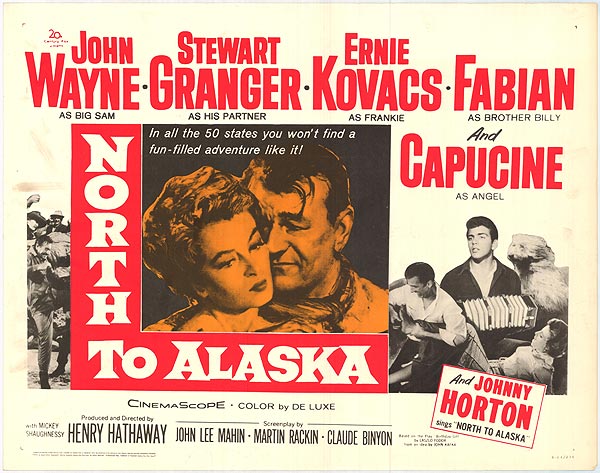 Henry Hathaway (left) directed, brought in to replace Richard Fleischer at the last moment, and of course he and Wayne worked well together. They’d made The Shepherd of the Hills (not really a Western) in 1941 and would do four Westerns together later, including the magnificent True Grit. Hathaway knew Westerns. He had cut his teeth at Paramount as Assistant Director to Victor Fleming on the silent Zane Grey pictures the studio put out in the 1920s, and then he had worked with Fleming on The Virginian in 1929. He had gone on to direct on his own the talkie remakes of the Zane Grey tales, with Randolph Scott, and had also directed several Westerns with Gary Cooper, so he had worked with the very best Western leads and he knew his stuff. Not that North to Alaska was in the same class as some of these great movies.
As for the casting, that was a weak point. The French actress Capucine was to play the female lead (though only billed fifth). She had been ‘discovered’ by Charles Feldman, Wayne’s producer – in fact she was his mistress – and he had thought about giving her Angie Dickinson’s part in Rio Bravo the year before, but he considered her accent too strong and her manners too patrician. She wasn’t very suitable for the part of Angel, a New Orleans prostitute who ended up in a common Nome whorehouse. And her acting was on the wooden side too. Still, she just about carried it off, I guess.

Stewart Granger got second billing as Wayne’s partner in the goldmine – though he is written out of most of the early part of the movie. Granger was a posh Brit who, however, had quite a handy sideline in Westerns. He was surprisingly good as the hard-boiled type in the saddle. Actually, he had started in ‘the wild north’ in a 1952 picture of exactly that name, and in 1956 he had appeared with Robert Taylor in the very good (and snowy) The Last Hunt. He’d followed that up with an MGM Western with Rhonda Fleming, Gun Glory, in 1957. So he was handy with a sixgun. He didn’t need one in North to Alaska, though, as it’s a comic and quite unWestern part. He sends his partner Sam McCord (Wayne) off to Seattle to bring back his fiancée Jenny, a quest that does not go well. His fury at finding out that Jenny has married another and his consequent broken heart last about twenty minutes, because he sees Angel. But she has already lost her heart to Sam… 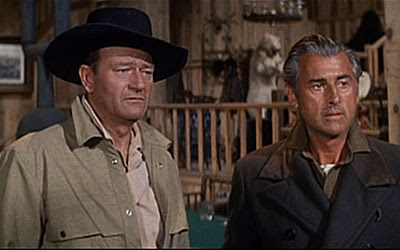 Westerns in those days had to have a pop star in them for some odd reason. Ricky Nelson had filled the role in Rio Bravo. Now it was the turn of Fabian, the teen idol. As an actor, he made a good singer. He had a contract with Fox and in 1959 had appeared in the Don Siegel-directed Hound-Dog Man and was pretty well known (at least by teeny-boppers) but he wasn’t strong in the part of Stewart Granger’s seventeen-year-old younger brother who also falls for Angel. 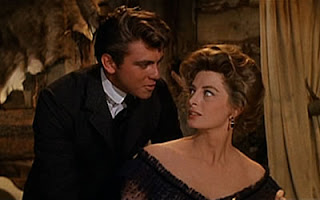 The best actor, apart from Duke, was probably Ernie Kovacs as the villain Frankie Canon. That mustache was perfect for the oily conman who schemes his way into getting his hands on the Wayne/Granger goldmine. It was his only Western movie but he was excellent in it.

Among the smaller parts I spotted Franklyn Farnum in the saloon, Kermit Maynard as a wagon driver, James Griffith bizarrely leading a Salvation Army band and John Qualen as a logger. All in all, though, the cast was not one of the movie’s strong points. Along with Ernie, Clancy the dog was probably the best actor.

Seven writers were involved in the script, which was pretty well made up on the hoof, and the plot, such as it is, is highly improbable. Furthermore, a long sequence at a picnic of logging men in Seattle gives plenty of scope for brawls and drunkenness (both always considered, at least by Wayne, hilarious) but seems entirely extraneous to the story and out of place. Never mind. 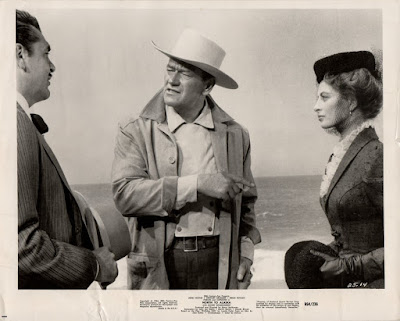 A lot of it was filmed in California, not terribly Alaskan, (in fact you can see Mt. Whitney from the partners' cabin) but they did some shooting in the Yukon and the CinemaScope cinematography by Leon Shamroy (The Bravados and Buffalo Bill) is pleasing here and there. Actually, their cabin is situated on the same creek that Rooster besieged in True Grit (it was also where Steve McQueen meets Brian Keith in Nevada Smith, but of course you'd have to be a sad case to know these things).


It all climaxes in a huge brawl in the mud (which is why I think it was a prototype of McLintock!) For a part of the film Duke wears his famous cavalry shirt. When he is punched in the big brawl his toupee flies off but they left that part in. The Johnny Horton song over the credits is reprised in the saloon. There’s no gunplay to speak of. Really, it’s hardly a Western at all, more of a screwball comedy. Still, it’s lusty, bawdy and not dreadful. It did well at the box-office - so well, in fact, that it got in the way of The Alamo. But Wayne looks as though he is having fun. With The Alamo going the way it was going, he needed some.