The very word tomahawk, defined by Webster’s as a small ax used as a weapon by Native Americans, conjures up bluntness and brutality. Hollywood liked the word. There was the 1951 Van Heflin Western of that name, and the 1957 TV series. There was a Yellow Tomahawk in 1954 and a Red Tomahawk in 1967 as well as A Ticket to Tomahawk (though that was light-hearted) in 1950. The Tomahawk Trail, The Last Tomahawk, and so on. There were plenty of tomahawks alright. Now there is a new one and it’s even more brutal: it’s a bone tomahawk. 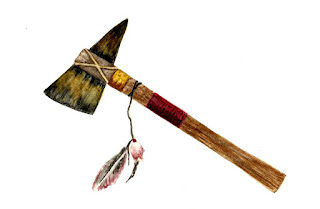 Ever searching for a new twist on the humble oater, movies gave us sci-fi Westerns, horror Westerns, noir Westerns, you name it. We have had Cowboys & Zombies, Cowboys & Aliens and now we have Cowboys & Cavemen. Bone Tomahawk, an independent movie which came out earlier in 2015 than the just-reviewed The Hateful Eight, is another of the recent Westerns to shock us with gore (which gets increasingly hard to do). 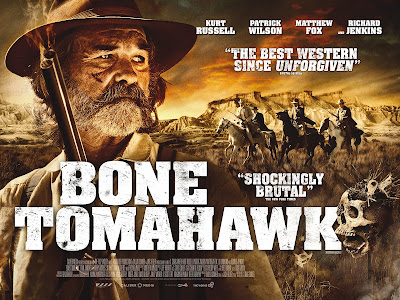 In many ways it is traditional: Sheriff Kurt Russell (also one of The Hateful Eight) rides out with a small posse to rescue a woman from the clutches of ‘savages’. This is pretty well the oldest Western plot there is and it goes right back to Fenimore Cooper. The difference, though, is that this time they aren’t Indians to have kidnapped the fair maiden but ancient cave-dwelling people of great fearsomeness. Indians are old cowboy-hat now; they aren’t frightening enough. They have been celluloid goodies too long. We need a scarier foe, more barbaric, more, well, savage. So writer-director S Craig Zahler invents some (anthropologically dubious) cannibal troglodytes for the brave cowboys to combat. It works: we feel the same fear and loathing that early audiences would have felt for the ‘Red Indians’ they saw on the silent screen. Oh, and of course fair maidens are obsolete now too; we have feisty women. 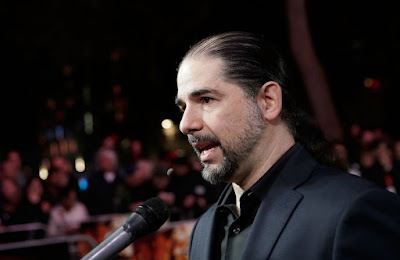 S Craig Zahler
I want to say early in these comments that in many ways, Bone Tomahawk is an excellent film. I would cite in particular the writing and the acting of Richard Jenkins, both possibly Oscarable. The screenplay has an authentic ring to it, with smatterings of Victorian language and some delightful digressions, such as the one (I am sure you will agree if you watch it) on the flea circus. For such a gruesome picture there is actually quite a leavening of humor. Mr. Jenkins as the old-timer deputy Chicory is outstanding. He joked that it only took the make-up department five minutes to age him (he was born in 1947, even before Jeff) but he acts much older than that and acts brilliantly. The movie is worth seeing just for his part. 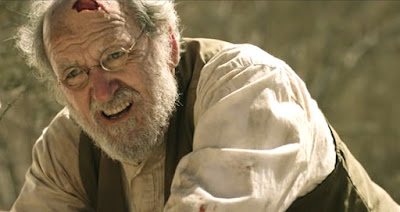 Richard Jenkins as the old-timer deputy, Chicory
Mr. Russell as Sheriff Hunt (a slightly obvious name) is also very good. He has matured into a splendid western actor. He started as a child star on TV (Jamie McPheeters) and did a lot of TV work before being a fine Wyatt Earp in the early 1990s (in Tombstone), and in 2015 he pretty well dominated Western casting by being The Hangman for Tarantino and leading in this one. In his resplendent whiskers and rather elegant suit and hat (it’s a late 1890s tale) he shows us the steel, courage and decency underneath, as all good Western heroes do. The other actors, interviewed, were thrilled to be riding with Wyatt Earp – of course every male actor wants to be in a Western. Whiskers
With Sheriff Hunt and Deputy Chicory ride Arthur O’Dwyer (Patrick Wilson), gammy-legged husband of the kidnapped woman, and the mysterious Brooder (Matthew Fox), ruthless Indian-fighter in a dandified suit. Messrs. Wilson (a well-known stage actor who was Travis in the 2004 The Alamo) and Fox (in his only Western to date) are also very good. Thus the posse only numbers four instead of the mandatory seven but budget was limited, you see. 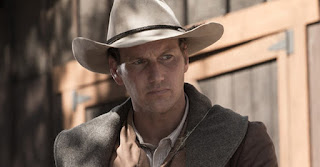 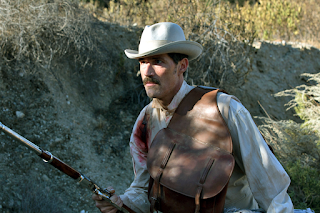 Ruthless Indian fighter
While most of the movie is taken up with the hunt, the early scenes in the town of Bright Hope are good too, especially those in the saloon, The Learned Goat. The town set was an old-stager, used in countless big-screen and TV Westerns.


There is not a great deal of music but there is a string quartet to give us somber, even sinister atmosphere, and a Benjamin Brittenish song over the closing credits. Jeff Herriott and the ubiquitous Mr. Zahler are credited. 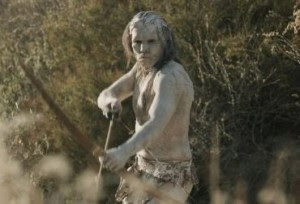 Fearsome foe
Visually, the film is not remarkable. The California locations were shot by Benji Bakshi, not a cinematographer I know (but then I know hardly any of the current ones) whose only Western this is. Mr. Zahler said that a pretty picture is fine but not as important as a good plot, writing and acting. I guess he’s right there. A first-time director, Zahler says he likes the Western genre and cites Sam Peckinpah, Budd Boetticher and Sergio Leone as influences. I didn’t see any signs of Leone (fortunately) but I suppose there was the odd tinge of Boetticher here and there, and Peckinpah must have been a sanguinary muse.


It’s an “old-school” movie, CGI-free, partly I suppose because of budget constraints, but it’s the better for that (in my view).


You need a strong stomach, and if you are squeamish I would advise skipping this one, but otherwise I recommend Bone Tomahawk as a well-made Western in the traditional mold but with new twists. The blurb on the DVD box (it’s just come out on DVD) screams that it is “The best Western since Unforgiven”. It isn’t, of course, but you can’t blame Zahler for the publicity slogans and in fact there are moments when his writing comes close to that of David Webb Peoples.