If you wanna call me that, smile!

Following a recent re-read of and subsequent new blogpost on Owen Wister’s seminal Western novel The Virginian, I decided on a rewatch – if there is such a word and if there wasn’t there is now – of what I consider to be the best of the many movie versions, Paramount’s film of 1929 with Gary Cooper as the Virginian.


There had been a silent movie directedby Cecil B DeMille in 1914, starring Dustin Farnum which was really little more than a filming of Wister’s own stage version (in which Farnum had starred). And there had been a larger-scale silent remake in 1923 with Kenneth Harlan as the Virginian. But the 1929 version was the first talkie Virginian. Later remakes came in 1946 with Joel McCrea (in color) and TV versions in 2000 (director/star Bill Pullman) and 2014 (singer Trace Adkins as the Virginian). There was also, of course, the long-running TV series but that had little to do with the original story and just borrowed characters’ names. 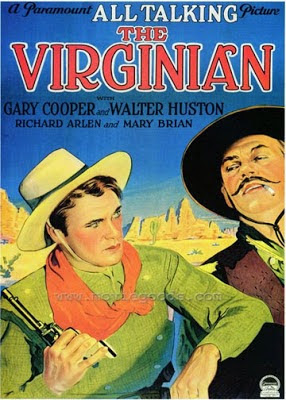 Still the best ever screen version


I had to dig out my old VHS player to watch the film. As far as I know it is still not available on DVD (and if so, that is a disgrace). But if you can get hold of a copy it will richly repay your effort. It is a key Western in the genre’s history and it really established so many of the cinematic conventions of the genre, as Wister’s novel had done in literary form. It was also a landmark movie in the sense that it was the first major sound film ever shot outdoors.


Of course the content of the long novel had to be contracted and even the majority of the story omitted – that is the case with all movie adaptations. But the film remains true to the spirit of the book, unlike some other versions, such as the dreadful 2014 one.


It starts with cattle as the cowboys of the Box H drive their herd into Medicine Bow, Wyoming, where we see Easterner Molly, the new schoolteacher, arriving on the train. She is frightened by a cow and the Virginian profits from this (though it is only “an old moo-cow”) to scoop her up and ‘save’ her from peril. So no river crossing. The train’s engineer defies the cowboys by tooting his whistle to frighten the cattle – so many of these little episodes were to become a staple of the movie Western for years to come. 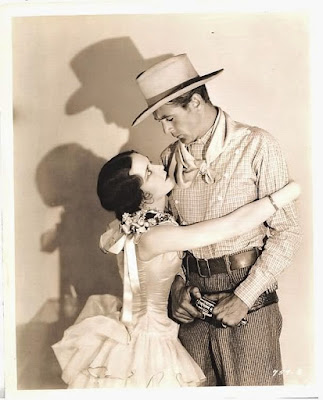 Brian and Coop
Steve is one of the first characters to appear, rival of the Virginian to pay attention to Miss Molly. Steve is played by Richard Arlen (1899 – 1976). Arlen had (like Coop) started as an extra, but he made a break-through when in 1927 William A Wellman cast him as a pilot in Wings (he had served in the Royal Canadian Flying Corps in the World War), so he was well known by 1929. He plays a cheery Steve, drawn more by inertia than deliberate intent into the orbit of the rustling villain Trampas. 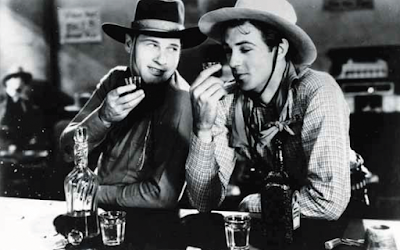 
Mary Brian was cast as Molly. “The Sweetest Girl in Pictures” had been Wendy in the 1924 Peter Pan, and moved effortlessly into talking pictures when the time came. Coop was having a torrid affair with Lupe Velez at the time (she had been the co-star of Coop’s first talkie Western, Wolf Song) and she was the ex of director Victor Fleming (who had also directed Wolf Song) so it was a bit awkward when she showed up on the set. Anyway, Mary Brian was safe from Coop’s advances, though she was pretty and single. She gives us a feisty Molly (she is rather wet in the book, I think) and she was certainly a high point of the picture. 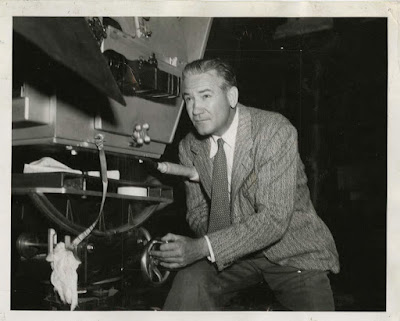 
Very soon we are in the saloon and have the famous scene where Trampas appears, dressed in black, and comes immediately into conflict with the hero. Trampas was played by second-billed Walter Huston (1883 – 1950). Huston was a star of Broadway through the 1920s and was better known than Cooper. The fear was that he would steal the picture, and in the saloon scene that seemed a distinct possibility, but Coop was already doing his quiet, underacting bit and succeeded in making the extrovert Huston seem almost to be overacting. Still, Huston was the best screen Trampas there has ever been (the worst was probably Brian Donlevy). The famous dialogue from the book is slightly altered when Trampas calls the Virginian “You long-legged sonova…”, and Coop sticks a gun in his ribs and replies, “If you wanna call me that, smile.” It is a remark that Wister had heard a deputy sheriff in Wyoming address to a man who had called him a SOB, and Wister was so struck by it that he used it to define his hero. 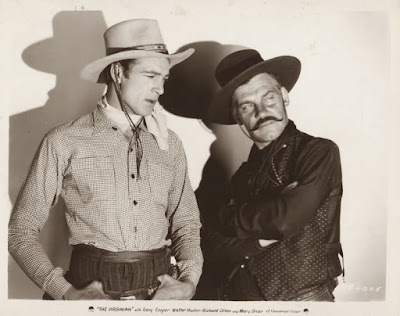 
Later in the story, the Virginian is shot by Trampas with a rifle (there are no Indians in this version) and he is not saved by Molly, though she nurses him back to health.

Gary Cooper, 28 years old, 6’3”, incredibly handsome and already a fine actor, was undoubtedly star of the show. All through the 1920s Coop had continued stunting and extra-ing on silent Westerns for a variety of studios, including Poverty Row ones. Finally, in 1927, came a lead role in a Paramount Western, Arizona Bound. It was a routine 53-minute silent oater shot in fifteen days but it was quickly followed by Nevada, another Zane Grey story. All of this had stood him in good stead for the great challenge, and opportunity, which was now to come as the Virginian. 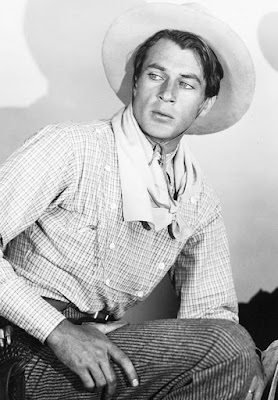 Gary Cooper was 28
He rose to it with aplomb. At first, he had difficulty remembering his lines (talkies were a new experience for most actors) and Arlen kindly offered to fix them to his chaps when he had his back to the camera. It worked, and Coop gradually grew in confidence. He developed a Virginian accent, coached, it is said, by Randolph Scott. He seems beanpole-spindly and endlessly tall, high, and though absurdly over-made up, as was the habit with actors in those days, he still manages to transmit emotion with his face, especially his eyes. It was a masterly performance and it made him forever the Virginian.


The cast and crew moved in a huge caravan with all the tractors, cranes, sound equipment and generators necessary to Sonora in the High Sierras of California. The movie was shot in only 24 days in May/June 1929 on a then substantial budget of $415,000. Director Fleming got $75,000, Huston $20,000 and Arlen and Cooper $3,400 each.


Other actors have pretty low-key roles. Judge Henry (EH Calvert) hardly appears at all. Probably the best minor character is Eugene Pallette as Honey Wiggin. It is hard to imagine but Pallette had started as a slim and athletic actor in silent movies under DeMille and DW Griffith but by the time talkies arrived, when his gravelly voice became a real asset, he was, er, gargantuan. He was in 36 Westerns between 1913 and 1946 but fully 14 of these were one- and two-reeler silents in 1913 and ’14. He was memorable again with Coop in Fighting Caravans in 1931 and he was unforgettable as Fray Felipe in the 1940 Zorro. 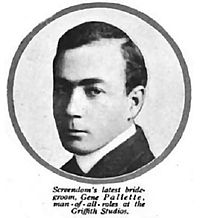 
Of course they do the baby-swapping scene, a favorite from the book and stage version. A cacophonous rendering of Three Blind Mice in the schoolhouse adds to the mirth. There is, as there was in the book, a strong comic thread running through the movie, though the somber lynching scene more than makes up for that, and the final showdown with Trampas is done with full weight and seriousness. The Virginian uses Steve’s sixgun, with STEVE carved on the butt, when he walks down to face Trampas.


Trampas really does say, “This country ain’t big enough to hold the two of us” and give the Virgnian until sundown to get out of town, and although Coop doesn’t quite say, “A man’s gotta do what a man’s gotta do”, he does make similar remarks. When he says to Molly before the gunfight, “I’ve got to stay” he reminds us very much of Marshal Kane in High Noon talking to Grace Kelly. The whole business of a man having to stand up in a gunfight despite the pleas of the ‘weak’ (but actually right) woman became a standard trope of the genre; this was the classic example.


The Virginian established the Western code of honor firmly in the ‘mythoscape’ of the genre. The Virginian has to face the villain down. Trampas had callously abandoned his fellow rustlers to their fate (hanging) and then shot the Virginian in the back from ambush with a rifle, and now he shoots with his revolver from hiding in Medicine Bow. He is a skunk. We also have the contrast between the racy saloon gal (Nina Quartero, whose legs get a good airing) and the pure schoolma’am, another image that was to become a standard, not to say cliché in later cowboy movies. The rustlers drink whiskey and play cards. In so many ways, The Virginian was the prototype of the talkie Hollywood Western. 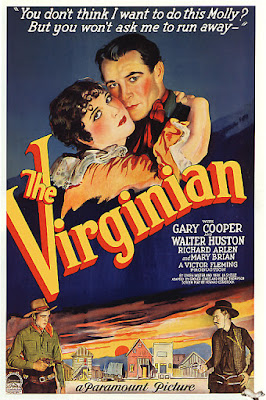 
Paramount-Famous-Lasky have produced a noteworthy talking film, in which the voices are nicely modulated and the acting pleasingly restrained. The story is cleverly developed by the director, Victor Fleming, who deserves great credit for the production and especially for the effective but at the same time gentle humor that pops up periodically. It is also a capitally timed picture, with characters going here and there with natural movements.


There is good suspense when the Virginian gets the drop on Trampas and in the latter stages of this film the glimpses of Trampas looking for the Virginian recall the doings of Wild Bill Hicock [sic], Bret Harte's men and even Buffalo Bill's thrilling encounters. It is a picture with a fine conception of the necessary atmosphere and one in which Mr. Fleming has happily refused to introduce extraneous incidents.


Hall approves of the acting:


Aside from the intelligent acting of Mr. Huston and Mr. Cooper, Richard Arlen gives an agreeable portrayal of Steve. Mary Brian does her share to help the picture along, but she might have been more persuasive with less rouge on her lips.


And in 1929 the critic was still marveling at the talking picture:


The sounds, whether footfalls, horses' hoofs, rumbling wheels or voices, are really remarkably recorded and reproduced. A good deal of this film was made in the open and it would seem that stories of Western life, if pictured in a rational fashion, would be unusually successful, for they are aided immeasurably by the audibility of the screen.


The romantic image of the cowboy as the embodiment of male freedom, courage and honor was created by men who had lived a rugged life in the West: in words by Teddy Roosevelt and Owen Wister, in art by Frederic Remington and Charles Russell, and in film, preeminently, by Gary Cooper.


Meyers and Warshow may have been thinking of High Noon but more probably they have in mind The Virginian of 1929, one of the greatest Westerns ever. Yes, by modern standards, it is rather ponderous and stilted but it was a very early sound film and that’s not surprising. The point is that it is superbly done and it is certainly the best screen treatment of Wister’s classic that was ever made. And it set the standard for the whole future of the talking-picture Western.