Many made-for-TV Western movies are no better (but no worse either) than the run-of-the-mill B-Westerns churned out for movie theaters in the decades before. TV movies can be Hallmark-bland or fall into that dreaded category of ‘family entertainment’ (read anodyne and/or saccharine). Every so often, though, one comes along that it is a bit better than that. Such a one was Turner’s 1994 offering of The Desperate Trail. 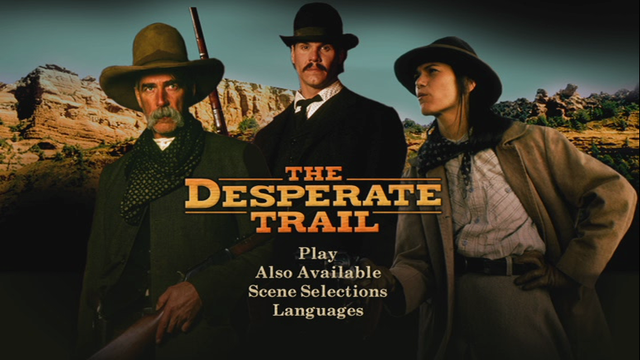 It starred Sam Elliott for one thing. Everyone likes Mr. Elliott in Westerns. It’s that growl of a voice and the handlebar mustache. He had started out in a bit part as Card Player #2 in Butch Cassidy and the Sundance Kid in 1969 but really made his Western way on TV, particularly in The Sacketts in 1979 and Wild Times in 1980, and, later, Conagher. He was Wild Bill Hickok in Buffalo Girls and Bucky O’Neil in Rough Riders, as well as, on the bigger screen, Virgil Earp in Tombstone. It’s a pretty good Western CV. No wonder the Coen brothers chose him to be the cowboy angel in The Big Lebowski. 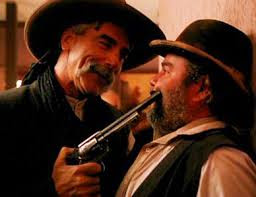 Marshal Elliott recruits a posse member
In The Desperate Trail, though, he is anything but angelic. He is (incorrectly) billed as ‘Marshall’ Bill Speakes (a common spelling mistake but it doesn’t look good in credits) and he is a sadistic brute. He is chasing a criminal and is first seen on the stage with the captured fugitive (whom he is taking to be hanged) handcuffed to his wrist. Now in days of yore this outlaw would have been played by a well-known tough guy actor but we are in the mid-1990s so it had to be a tough gal instead. It’s Linda Fiorentino as Sarah O’Rourke, and she’s as sassy as all get out and looks all Bad Girls/The Quick and the Dead/Bandidas in her pants and slouch hat.
Another stage passenger, a smooth-talking young fellow from New York, tries to woo her but gets very short shrift. This Latin-quoting Easterner is Jack Cooper (Craig Sheffer) and he and the tough gal are soon to team up in a Bonnie-and-Clyde-like duo, or perhaps it’s more Butch Cassidy and the Sundance Gal. I’m probably not supposed to say these days that Ms. Fiorentino is decorative but I’m too old to be PC, so she is damn good-looking. And she doesn’t do at all badly in the part either: you feel she’s at least twice as tough as her accomplice. It was, sad to say, her only Western. Mr. Sheffer, the good brother from A River Runs Through It, has been in three other Westerns (or semi-Westerns) and also isn’t bad, though his costume and make up were poor. 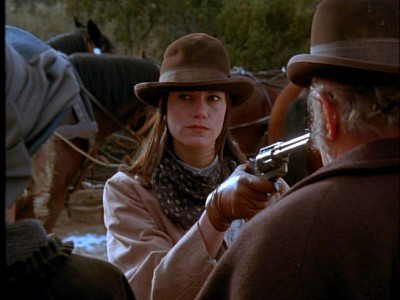 Outlaw Linda Fiorentino
Well, you wonder why Marshal Speakes is so dead set on getting Linda to the scaffold, and so gloating about the effects of the rope, but then you discover that she killed his son, so it’s more than a lawman/outlaw quest – it’s personal. Speakes Jr. was her husband but tried to beat her, and so she killed him. There’s rather a wife-beating theme running through the movie, in fact, as another character on the stage also thumps his spouse. He gets his come-uppance, though. Elliott is splendidly vicious. He did well as the bad guy. 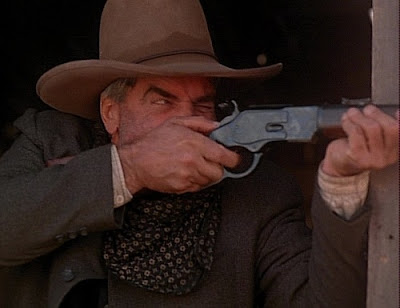 Splendidly vicious
There’s a lot of Western action and it’s well handled too: a stage hold-up, a couple of gunfights, a jailbreak. Marshal Sam pursues the escapees with a posse of six instead of the mandatory seven (it must have had a limited budget). In a blazing gun battle three posse members are slain but there still seem to be five when they continue the pursuit. Most odd.


The Easterner Jack has a brother, Walter (Frank Whaley) and there’s some sub-Freudian psychobabble about how Jack caused a disabling injury to Walter and can’t forgive himself. Actually, that was the least of his problems because really Jack now causes the death of his bro at the hands of Marshal Elliott.


It’s all quite violent and grown-up, which is good. The direction (Scorsese alumnus RJ Pesce) is fussy with a lot of edits and jumping here and there but the movie was good enough for Mr. Pesce to be named Best Independent Director of the Year at the Hamptons International Film Festival. Pesce later did Sniper 3 and I feel he might be more at home in that genre. Still, he did a Western, so respect.


Don’t expect anything greatly original (except maybe the casting) when you watch this one, but it’s gritty and fast-paced (mostly), and Sam is pretty damn good as the sadistic sheriff. Worth a shot.