I do admit to having a soft spot for the sixteen Lone Star Westerns John Wayne did over eighteen months from late 1933 to early 1935. We’ve reviewed quite a few of them already. Yesterday I re-watched one of my favorites of the series, The Lucky Texan. It’s not a favorite because it’s in any way unusual or original (perish the thought) but just because it’s brim-full of energy and fun. 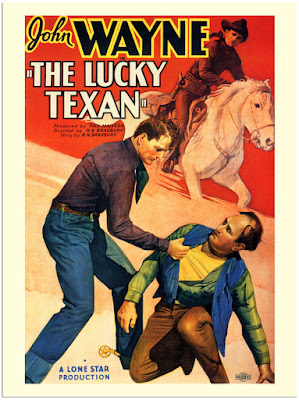 A whole lot of fun
We start with the good old Lone Star logo to high-speed tiddly-dee music, the credits tell us that RN Bradbury directed and wrote, and Archie Stout was behind the camera, so all’s well with the world, and straight way there’s John meeting up with Gabby Hayes (beardless in those days and billed as George). The pair immediately sit down and explain the plot to each other. They needn’t have bothered because the plot is always the same. John (actually he’s Jerry this time, so that’s new) has been away but is back to live with Gabby on the ranch, as his daddy wanted. But rustlers have taken all the cattle (there will certainly be a baddy in a suit in town who is responsible, you wait) and so the two pals set up as blacksmiths (now that’s new). 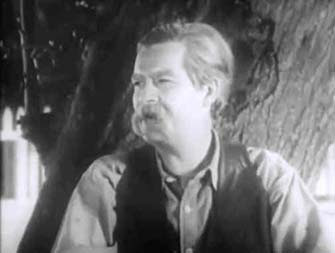 Gabby wasn't yet 50 but still did the old-timer parts
The good fortune of the titular Texan shows itself when Jerry is being nice to a dog (a sure sign of goodiness) and this dog, Friday, is in fact rather splendid. Later in the movie this mutt will show himself to have positively Lassielike abilities, and save Gabby’s hide. Anyway, in the first reel Friday digs up from the dust of the forge floor a gold nugget that has dropped from the hoof of a horse Jerry had been shoeing. And they find the seam it came from in a nearby creek. They are rich!


They decide not to stake the claim, though, which you might think imprudent but you see they don’t want anyone else to know where the bonanza has been found. So the story is all set up for skullduggery. Surely there will be a pencil-mustached besuited villain in town, Lloyd Whitlock most likely, probably with Yakima Canutt as henchman, who will seek to do the dirty on the pals? Yup. There is. There always was. The evil Harris (Whitlock) is the local assayer, very well placed to defraud prospectors out of their claims. He also reveals to sidekick Yak that he was the one who rustled all Gabby’s cattle on the ranch. He wants that ranch as well as the gold, and sneakily gets Gabby to sign it over. What a skunk. 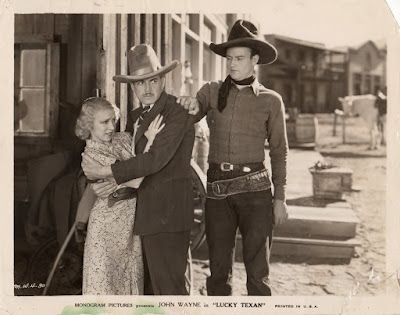 Just a minute, mister...
Wait! I hear you cry. Where is the girl? Surely Gabby will have a winsome granddaughter who will come to live with her grandad and fall for John? Yup. It’s Betty (Barbara Sheldon, who only did four films and only one of them a Western) and she duly turns up in her 1930s dress and is duly smitten. Well, John was jolly handsome, so you can’t wonder. 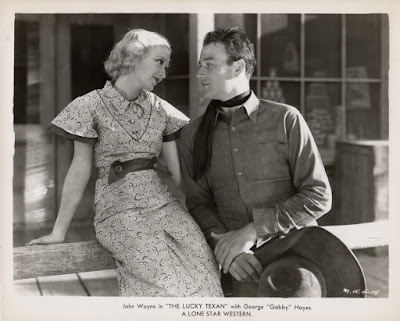 It ends in wedded bliss
There’ll be a sheriff, Earl Dwire most probably, and he’ll be ineffectual until John and Gabby foil the plot. Then he’ll take the badmen into custody. In this one Sheriff Earl has a ne’er-do-well gambling son, Al, who shoots the bank manager (not a great crime, you may opine, shooting a bank manager, but it is frowned upon in this town) and this son (Eddie Parker) takes Gabby’s money and starts spreading it all over town, doh. So we get a sub-plot of villainy, two for the price of one. 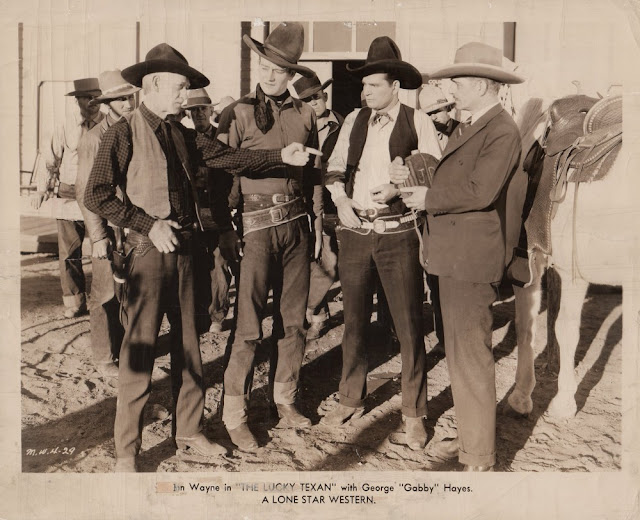 The usual suspects: Earl Dwire as sheriff, John Wayne as the hero, Yakima Canutt as henchman and Lloyd Whitlock as principal villain
Well, there are all the horse chases you could want and several bouts of fisticuffs in which Wayne can use that splendid roundhouse punch he had. There wasn’t much room for actual acting in these Lone Star movies (luckily); they really depended on action. And we get plenty. In this one the crooks, unmasked, try to get away on a motorized railroad buggy and are pursued by Duke on Duke and Gabby in an automobile. There’s some high-class stunt work (by Yak, of course, so Yak is chasing Yak) as the buggy and the car cross and nearly hit each other. There’s also a good bit with Canutt and a recalcitrant mule (you can hear the crew laughing). The best bit, though, is when Wayne rides a wooden pole at high speed through a sluice run to overtake the fleeing Al. Not ones to pass up using a good idea, they did it again in The Lawless Frontier the same year.


In the climactic trial scene Gabby appears in drag (his old Charley’s Aunt costume from his previous career on the boards) and much hilarity is the result. He even shows a rather daring amount of leg.


Friday was the best actor though.