Issued within weeks of The Lucky Texan, with much the same crew and cast, and, to be frank, pretty well the same plot, The Lawless Frontier was another in that fun series of sixteen one-hour oaters that John Wayne made in the eighteen months or so between the end of 1933 and early 1935. These movies were produced by Paul Malvern’s Lone Star company and released by Monogram Pictures, before it got delusions of grandeur and became Allied Artists and aspired to color A-movies. Poverty Row residents Lone Star and Monogram were a far cry from Fox’s mega-budget Raoul Walsh-directed The Big Trail of 1930 that Wayne had starred in, but at least he was working. And he was learning his craft, too. 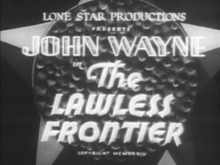 It's got vim and zip
They were mostly directed by B-Westernmeister RN Bradbury and although some were written by Duke’s drinking buddy Lindsley Parsons, many, including The Lucky Texan and The Lawless Frontier, were penned by Robert Bradbury himself. He was pretty well on auto-pilot when he did them; formulaic is hardly the word. But they are energetic and fun, and still worth a watch today – at least to see them once. 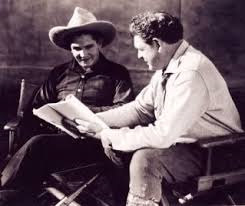 Director Robert Bradbury (right) with his son Bob Steele
The Lawless Frontier benefits from my hero Earl Dwire, who from certain camera angles bears more than a passing resemblance to Adolf Hitler, hamming it up wildly with a lousy ‘Mexican’ accent as bandit chief Pandro Zanti (they all pronounce him Zanny). Complete with bandolero and sombrero, Zanti despicably marauds the neighborhood, leers lasciviously at the leading lady, and even shoots John Wayne’s dad in the back. We wouldn’t want any anti-Mexican sentiment, though, so we are told (twice) that Zanti is only posing as a Mexican (“he speaks the language fluently”); in reality he is a white-Apache “half-breed”, so if he's half-Apache it’s perfectly to be expected that he would be a lowlife, obviously. 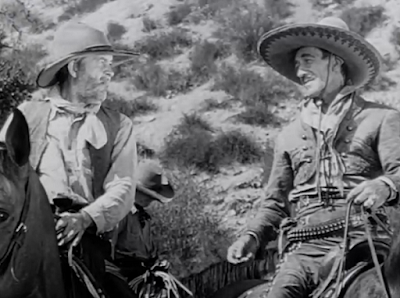 Gabby rides with Earl Dwire, who is villain Pandro Zanti this time
Earl was usually the rather ineffectual sheriff in town, who only takes the baddies into custody at the end once our hero has bested them, but this time he had been promoted to principal villain (it happened occasionally) and it’s Jack Rockwell (nearly always a lawman) who wears the star as incompetent and crooked Sheriff Williams.


Zanti’s right-hand henchman is naturally Yakima Canutt, as Joe again. Wayne’s pal Yak was of course in charge of the stunts, doing many himself, but he often moonlighted as henchman too. It must be said that as an actor, he made a good stuntman. But then none of the cast was really going to pose a serious challenge to Laurence Olivier. Wayne himself was about the best: he was gradually improving.


Buffalo Bill Jr. (Jay Wilsey) is a second henchman (well, we’ve all got to start somewhere). He was in quite a few of these Wayne Westerns.


Gabby Hayes is there, of course, billed as George and with his beard at last properly in place. He is a failed miner whose claim is plumb played out. Zanti lusts after his granddaughter Ruby (Sheila Terry, who had co-starred with Wayne in an earlier Warners Western, Haunted Gold, and would also feature in another Lone Star outing, ‘Neath Arizona Skies). Gabby always had a winsome granddaughter for Wayne to fall for. Gabby is stabbed in the back in this one, oh no!, but luckily it’s only a flesh wound and he is soon back to his old-timerish chuckling. 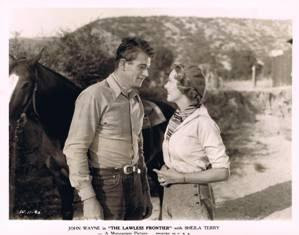 A fair maid to be wooed and won
John, by the way, is John again this time, John Tobin. He was usually John Something. In The Lucky Texan he had broken the mold and been Jerry. I ask you. But his flashy white horse Duke is nowhere to be seen in this picture. What has become of him? John rides a black, though he assures us that it is a thoroughbred.


Much is made in this movie of a secret passage in the miner’s cabin and secret passages did feature quite heavily in these pictures.

Zanti’s gang number the right and proper seven. Zanti is finally done for when he drinks from a poisoned water hole, the fool, and serves him right too. Well, he was only an Apache half-breed.

There are some unpleasant stunts, including a brutal horse fall and one of a poor nag ridden off a bluff and into a river. But there’s a good bit where John ties a string to his pistol’s trigger in a canyon and manages both to shoot at the badmen and chase their leader at the same time. Best of all, of course, there’s the sluice-run stunt, also used in The Lucky Texan (they weren’t going to waste a good idea) when John uses an old board to surf down a chute at high speed and overtake the villain. 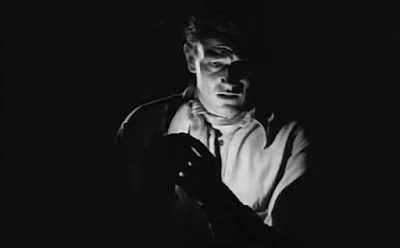 DP Archie Stout goes for an artistic shot
There are the usual horse chases and fisticuffs, John employing that robust roundhouse punch he had. There’s dynamite too. Oh yes, it’s all go.


Of course it finishes with wedded bliss for John and Ruby, and John is now the new sheriff. 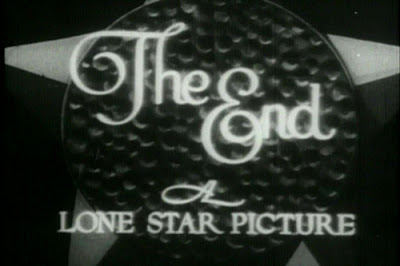