I must admit to quite liking Sterling Hayden B-Westerns. He was good at gritty films noirs and those were transferable skills for tough-guy Western roles. Have a look at Flaming Feather (1952), for example, or Shotgun (1955). Best of all, Denver & Rio Grande (1952). Hayden himself didn’t like them though. He called them “wretched” and only did them as a job, to pay for his sailing and alimony (he was a serial divorcee). 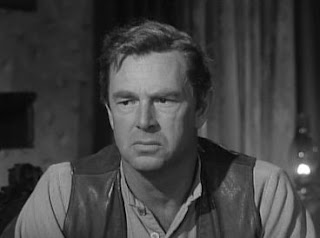 Sterling Tough-Guy Hayden
Like Valerie, another Hayden picture of 1957, The Iron Sheriff is more of a courtroom drama than a proper Western (though Hayden as sheriff is not at the trial but out tracking down the murderer, so that’s good) but that’s one of the reasons I like it. Not that I am a great Perry Mason fan or anything but you see in this trial you have the ideal personnel: the prosecutor is stern Frank Ferguson, the judge is a sterner Will Wright and the defense attorney is alcoholic, cynical, laid-back John Dehner (in an excellent performance). Three of my favorite Western character actors, in a legal triangular duel of words. Can’t be bad. Talking of Perry Mason, writer Seeleg Lester, whose only Western movie this was, penned several Perry Mason episodes on TV, and it shows. I wonder why his momma named him Seeleg? But that's by-the-by. 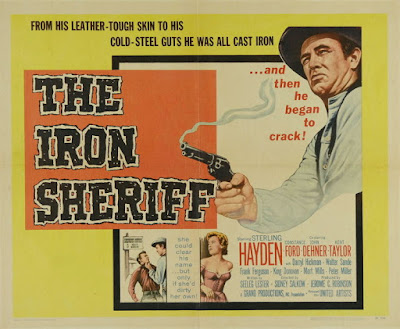 In the poster Hayden looks more like Robert Ryan
We are in South Dakota, 1891, and in the opening scenes a buckskinned stagecoach driver is shot and killed (it's a good stunt fall). The sheriff’s son Benjie (former child actor and later regular of TV Westerns, Darryl Hickman) is blamed and locked up. The newspaper owner (Kent Taylor in extraordinarily 1950s hairdo) seems to have it in for the boy and whips up the town against him (and his dad). Mr. Taylor, you doubtless know, was a B-Western vet from a Henry Hathaway/Randolph Scott picture of 1933 until a 1967 episode of Rango on TV. Quite a career. 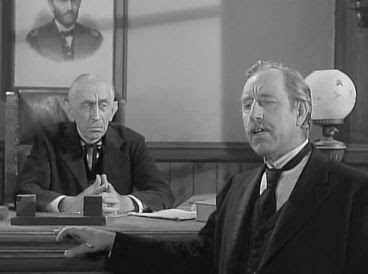 Judge Will Wright skeptical of the arguments of Prosecutor Frank Ferguson
So the movie is really a whodunnit, and we ride up false trails and down garden paths as we are led to believe the guilty party was first one town resident, then another.


Directed by lifer Sidney Salkow (writer on Bing’s 1936 singing Western Rhythm on the Range and director of B-Westerns right through to The Great Sioux Massacre in 1965), The Iron Sheriff is solid, OK, but honestly not much more. It’s Hayden that makes it, even if he was sleepwalking through the part. He’s Iron by the way because he does the right thing with steely resolve and gives testimony that incriminates his own son because he believes it to be true.


There’s lerve in the SD air, for both brylcreemed Kent and the sheriff love Constance Ford, and that’s why Kent hates the sheriff and wants him out. However, Constance naturally opts for Sterling (whose hair oil has been kept modestly in check). And Benjie the son also has an inamorata, Kathleen (Kathi Walden), who testifies that she is still at school though she was 24 and looks it. Perhaps she was a late developer. 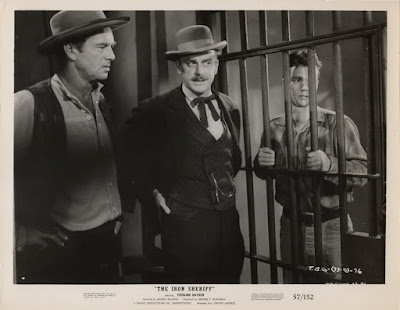 The sheriff's son is in jail for murder. Lawyer Dehner has to get him off.
There’s a range detective (Mort Mills), rather a tough nut, and a US marshal (Walter Sande) also turns up in town, sent by the governor, to baby-sit the sheriff in case he tries to get his son off. So the character actors are there alright.


Finally Sheriff Sterling IDs the killer and sets off in hot pursuit. But will he bring him in alive or does he have revenge-murder on his mind? The tension isn’t that great, though, in fact, and we kinda know the answer in advance. 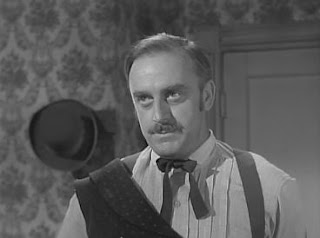 John Dehner, fine actor
Indeed, the whole thing lacks tension, and even credibility, and there’s a bit which is prudishly puritan, even for 1957, when the whole courtroom is shocked by the suggestion (hinted at, obviously, not voiced, dear me, no) that the sheriff’s son and his gal might actually have had “unnatural relations” – they mean sex, aka natural relations - before they married. The music (Emil Newman) is grim too, seeming to be the soundtrack of a cheap gangster flick. So I fear that The Iron Sheriff is not exactly from the very top drawer of Western movies – far from it. Still, Sterling’s in it and with Will, Frank and John in the courtroom, it’s worth a watch.