Rango, have you always been alone?

Directed by Lone Ranger maestro Gore Verbinski (Johnny Depp’s accomplice on the Pirates movies) and written by James Bond-meister John Logan (sad to say, his only Western), Rango was a top-notch amusing take on the Great Genre.


Like many animated/cartoon movies these days it is knowing, even wise sometimes, and pitched not only at children but at their parents too. It was rated PG, rather oddly. Perhaps they meant that parents should take their children’s guidance before going to see it. More likely it was because some animals smoke.

Alfred Molina is Roadkill the Philosopher
This lizard in a gonzo Hawaiian shirt (there are quite a few references to Depp’s Fear and Loathing), is a Reptile With No Name but he takes the spaghetti name Rango when he sees Hecho en Durango on a beer bottle and grabs at the idea. He owes more than a little to Kermit, I thought, though as the movie makes clear, reptiles and amphibians are far apart.

Depp is in his element
Over very spaghetti opening music (Rango!) we see our hero’s early trials and tribulations in the Mojave Desert, including doing battle with a large and hungry hawk. He arrives in the unromantically but accurately named town of Dirt, which, in proper Western fashion, he finds has been treed by the mayor, a land-grabbing turtle in a wheelchair who wants the whole valley, as land-grabbing turtles tend to do. More frightening, this ruthless turtle (Ned Beatty) has a henchsnake, a ferocious and huge rattler by the name of Rattlesnake Jake (Bill Nighy). He has a long bandolero of bullets wrapped about his sinuous form, and boy, is he mean.

Rattlesnake Jake
The plot from there on in is Chinatown, and indeed Mr. Beatty’s mayor-turtle has more than a little of John Huston’s Noah Cross about him (though I am relieved to say without the incest). For yes, someone in the midst of this drought-stricken town is dumping water out on the desert. Why on earth would they do that? And yet one animal (Stephen Root) is found drowned…


Many Western clichés are affectionately quoted. There’s a ratty saloon whose furry denizens are mightily impressed by Rango’s tale of how he dispatched the seven Lewis brothers with one bullet. Someone lays down aces and eights there. The town windmill squeaks as tension mounts. There’s a Deadwood-ish bottleman. There’s a painted Monument Valley. Rango throws his sheriff’s star in the dust. The clock strikes noon before the gunfight. Hell, what more do you want?


There’s a blind mole patriarch, Balthazar (Harry Dean Stanton) with no-good sons. They try to steal the town’s precious water. He's somewhere between Charles Kemper in Wagonmaster and Donald Pleasance in Will Penny. 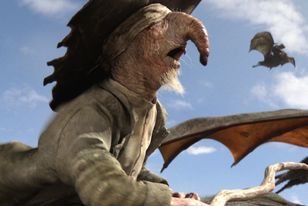 Bandit patriarch Harry Dean Stanton
I liked the Indian Wounded Bird, a crow (presumably a Crow), voiced by Gil Birmingham. He reminded me a bit of Johnny Depp’s partner in Dead Man, Nobody. Of course Depp himself was Crowlike in The Lone Ranger. There’s a Dali dream sequence Hitchcock fans will enjoy. There are entertaining surreal touches, too, when Sheriff Rango “forms a possum” after the bank is robbed (of its water) by Balthazar and they ride out in pursuit on roadrunners. The Ride of the Valkyries accompanies them, on banjo. There are also bats as Star Wars/Apocalypse Now fighters in a canyon. There’s even a mariachi Greek chorus of owls. It’s like a hallucinating Warner Brothers cartoon. I’m not sure what the film makers were on. 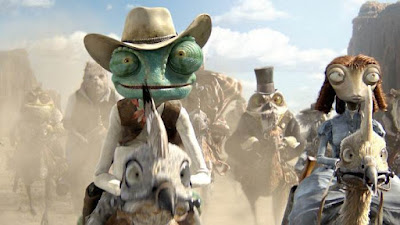 Rango and Beans head up the possum
Who am I? Yup, Rango is constantly searching - for himself, mostly. It’s an existentialist Western. He does find a soulmate, at least, in the shapely form of the tantalizing tetrapod Beans (Australian-Scot Isla Fisher), an occasional catatonic. Even more importantly, he finds the Spirit of the West, who uncannily resembles Clint Eastwood but is voiced by Timothy Olyphant, and who has a golf buggy full of Oscars. Now at last he can learn the Truth. Thanks to the Spirit, Rango goes back to Dirt and picks up that star from the dust, for we all know that a lizard’s gotta do what a lizard’s gotta do. And so the final quick-draw showdown between Rango and Rattlesnake Jake looms… 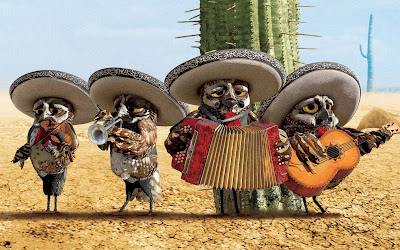 Strigiform mariachi chorus
The great Roger Deakins was “visual consultant” so they got the look right. Mr. Deakins features (as indeed, who does not?) in the quite absurdly long list of credits. This credit business has got quite out of hand.