You can get Westerns all kinds of ways now. In the olden days you had to go to the movies, then came TV, and now you can watch them on demand, download them, stream them – I hardly even understand the ways. But it’s good. The C-Bar Production Company kindly sent me a link to watch one, C-Bar, and I clicked on it and lo and behold, it worked.

These days it’s almost a short, at 60 minutes, but of course that was the perfect length for the second-feature Westerns of yore. And yore is really what we do, right?


I wasn’t expecting too much, to be brutally frank, because many of these made-for-TV or straight-to-video Westerns these days aren’t exactly magnificent (though no worse than many B-Westerns of yesteryear) but I was pleasantly surprised by this one. It’s actually rather good.

It seems to have been quite a personal project: Mark Baugher wrote the novels on which it is based, he was a producer and he also stars as Dockie Barnett, the old and grizzled ex-outlaw who feels obliged to ride the trail again to bring to book some more heinous outlaws who are going in for quite a bit of rape & pillage. Mr. Baugher might, in old Western days, have been termed an old-timer, dare I say even an old coot, but he carries it off as the white-whiskered rancher who’s still got what it takes when it comes to rightin’ wrongs and doing what a man’s gotta do. 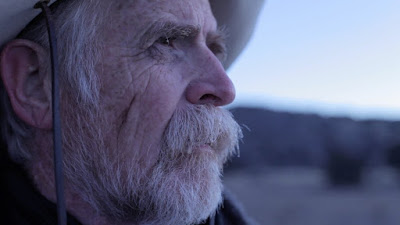 The (rookie) director is Patrick Ball, who also stars as the loathsome psychopathic villain – not the leader of the gang (in fact the leader of the gang seems to be in fear of him) but an especially homicidal gang member. He plays a key part because when the good guys wipe out the baddies, this one escapes and comes looking for revenge.


The gang boss is Buck Montgomery, played by Buck Montgomery. Mr. Montgomery had been in another couple of independent Westerns, Bannock (Baugher was in that one too) and Justice for All, both in 2014.


The hero has a wife (Sande Comenzind) and two children: a rather shiftless son (Mark Girard, I think, but I may be wrong) and an implausibly well-toothed, blonde, pants-wearing, gun-toting daughter (Robin Grande) to whom the adjective feisty might well be applied. All the family use language of quite an earthy kind, let us call it Chaucerian, with plenty of references to bodily functions of the expulsive kind, though few if any of a sexual nature. We cannot know now how much frontier families really used such language in speech. They might well have done, though perhaps the womenfolk less so in those Victorian days. Anyway, let us call some of the epithets used, er, salty.


With a couple of the fellow ex-outlaws (we see sepia flashbacks of them robbing in their more youthful days) Dockie and his two offspring set off to hunt down the ultra-dangerous Montgomery Gang, which they duly do, outside a cantina, and begin immediately blasting away without more ado, which doesn’t seem all that sporting, or compliant with the Western code, but it is certainly a good way of gaining an advantage in the ensuing gunfight.


Well, I shall not give away more of the plot but the hour is packed with plenty of action, much of it quite gruesomely violent in that modern way.


No one really occupies the moral high ground in this picture. Yes, the Barnett family are clearly meant to be the good guys, and we are supposed to be on their side, but they were violent outlaws too once and even now they hunt down the Montgomery gang without any evidence of its members’ guilt and shoot them all.


The look of the film is rather good. It was filmed in nice ‘Western’ Arizona locations and there’s some rather impressive cinematography (Aaron Newton with director Ball). There’s a clever shot of a shotgun being loaded and a nice silhouette of riders on the skyline, among other quite classy shots.

I could have done without the Mexican lady’s Ave Maria, I’m afraid. She belts it out while the big slo-mo blood-spurting gunfight is taking place, in a sort of The Godfather-meets-The Wild Bunch way.


Some of the actors are good and some are almost convincing – but no names, no pack drill.


Still, all in all, I think you could give this movie a go.