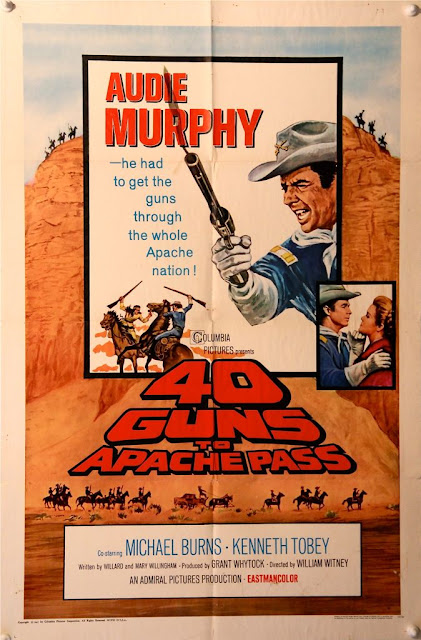 It was not a glorious filmic farewell, being an average Western at best. It was also the last Western movie to be directed by William Witney (though he went on with TV Westerns till ’82). Witney was a Mascot/Republic alumnus, experienced in B-Westerns - he’d done many Roy Rogers oaters. He’d also directed Audie before, in Arizona Raiders in 1965, also for Columbia. He was not one of the greats, I fear, though reliable and pretty competent. 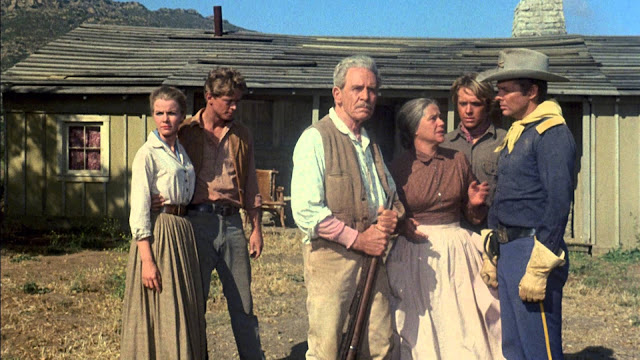 By the late 60s we had a right to expect slightly more nuanced films about Apaches. But the Apaches in this picture are out-and-out baddies, referred to as savages and no one contradicts that. Their leader is Cochise and Cochise had of course, since 1950 anyway, been portrayed as a statesmanlike and wise leader – one thinks in particular of Jeff Chandler in Broken Arrow, but other Cochises too were serious figures. Here, though, Cochise (Michael Keep) is just a fierce chief who has taken a vow to exterminate all palefaces from his lands, and his Apaches are just nameless and faceless extras to be shot down at will, as they were in countless bad Westerns of the 1930s and 40s. 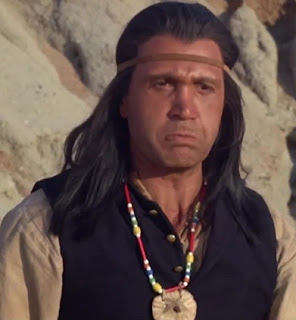 We are in Arizona in the late 1860s. Cochise and his braves are on the warpath and the US Army is undermanned and ill-armed (though of course far better armed than the Apaches). Captain Coburn (Murphy) is a brave but strict officer charged by a beleaguered colonel (Byron Morrow) at Apache Wells with bringing in a vital cargo of forty repeating rifles (Henrys, I think) so that the soldiers can protect themselves and the settlers they have gathered there. 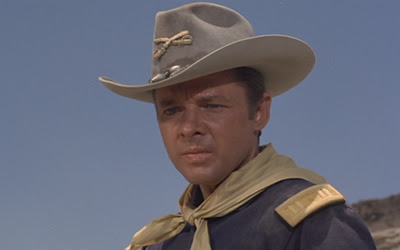 Among these settlers are the children of good old Kenneth MacDonald, farmer: they are Ellen (Laraine Stephens, in her only Western movie), the inamorata of the captain, and her two brothers, just young boys, who join up to wear the blue when their daddy is killed by the Indians. They want revenge. The older lad, Mike (Michael Blodgett, actually 27 but looking younger) is OK as a soldier, full of gung-ho in fact, but his younger sibling, Doug (former child actor Michael Burns, who was 19 but looks about 15) is a tender flower, afraid of the sight of blood and, to be frank, a bit of a coward. The expedition doesn’t go well. Doug freezes up when Mike is beset by Apaches, and his brother is horribly killed. The captain brands Doug a “yellow boy”. To make matters worse, the rest of the troop are pretty bad eggs.


They are led by ex-Confederate Corporal Bodine, played by orange-haired Kenneth Tobey, always rather good as a baddy. In Westerns, -ine or –een names tend to be skunks. Bodine hates Capt. Coburn and will do anything to get him killed. He whips up the other troopers, including poor Doug, into mutiny, nabs the forty rifles and plans to sell them to Cochise. Now you know that in Westerns, selling guns to the Indians comes somewhere between cannibalism and matricide on the scale of heinous crimes. 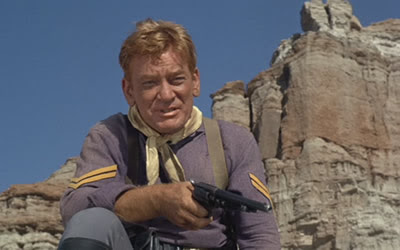 This whole rather old-fashioned skullduggery plot was penned by the Willinghams, Willard and Mary, pals of Audie who wrote his Whispering Smith TV show as well as various other Murphy oaters on the big screen. Willard also appears in the farrago as an actor, one of the mutinous troopers, Fuller (he was also Frank James in A Time for Dying).


The best actor in the cast is probably Robert Brubaker as the crusty veteran Sergeant Walker. He makes the most of the part and there’s a good bit with him in a rocking chair. Brubaker was Floyd the bartender in Gunsmoke and Deputy Blake in US Marshal on TV but he’d also done a few big-screen Westerns, including another, similar Murphy/Witney Western, Apache Rifles in 1964.


40 Guns to Apache Pass also features a rather tiresome voiceover narration that adds nothing and which could well have been dispensed with. The music (Richard LaSalle) is unWestern and uninspired. The titles are very 60s. There are California locations and the camerawork was done by Jacques Marquette, who had started in Hollywood back in 1919 as a gofer and then technician, graduating to cinematographer. He did mostly TV work but he’d shot Arizona Raiders with Audie in 1965.


40 Guns to Apache Pass (the story has nothing to do with the 1862 battle with Cochise at Apache Pass) is not a bad Western. It isn’t lousy or anything. But it’s routine at best and derivative, and Audie had certainly done better.