Made-for-TV Westerns in the 1970s were not often very good. It was pre-Lonesome Dove and major big-budget miniseries were still to come. Studios with TV company spin-offs thought they could get viewers by cheaply remaking some classics from their back catalogue, with minor stars. True Grit got the treatment in 1978.


The 1968 novel by Charles Portis was so splendid and the 1969 movie with John Wayne so fine that it was inevitable that a TV version in the 1970s would be doomed to derision. And indeed, reviews have been pretty well universally bad. Even John Wayne’s own big-screen attempt at a sequel in 1975, Rooster Cogburn, had none of the magic of the novel or the ’69 film, and a small-screen treatment a couple of years later wasn’t going to fare better.


The TV version had an indifferent director in Richard T Heffron, and writer Canadian Sandor Stern was no Marguerite Roberts – and he hadn’t even the original novel to adapt, for two of the characters (Rooster and Mattie) are the only link. And a major weakness of the TV movie was Lisa Pelikan as Mattie. It wasn’t so much her age (she was 24, playing a sixteen-year-old girl) for after all Kim Darby had been 22 (and a mother) when she played the teenager in 1969. Nor was it Ms. Pelikan’s part, for screenwriter Stern had made an attempt at Portis-ish dialogue for her. It was her delivery. She spoke the words unconvincingly, sometimes gobbled and too often shouted. Furthermore, she had pure 1970s hair of a Farrah Fawcett Charlie’s Angels kind and 70s cosmetics to match. 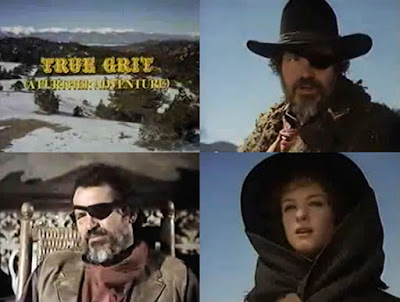 Warren as Rooster but a poor Mattie
Still and all, despite all these obvious failings, I will say that Warren Oates was pretty damn good as Rooster. He has a Jeff Bridges look about him and I wonder if Mr. Bridges had taken him as a model almost more than he did Wayne when he was Rooster in the Coen brothers’ True Grit in 2010. 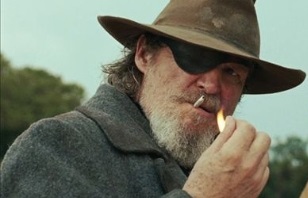 Bridges as Rooster, 2010
It was actually Oates’s last Western. He’d been a mainstay of TV oaters since 1958 and of course was taken up by Sam Peckinpah. By 1978 he was still only fifty but then the ‘real’ Rooster was only in his forties; it was only John Wayne that makes us think of him as an older man. Anyway, bearded Oates does a good job in this TV version and makes a memorable cantankerous curmudgeon.


Both big-screen True Grits benefited from fine locations and cinematography and while this TV one was certainly not in the Lucien Ballard class, it was shot around Buckskin Joe in Colorado, by Stevan Larner of Badlands and Twilight Zone fame (this and another TV movie were his only Westerns). There’s nice snowy scenery, and South Pass City (the story is set in Wyoming) looks pretty good.


There’s a rancher (Lee Meriwether, rather too glam and soft-complexioned to be a Wyoming widow living a life of hardship) who has three young sons who want to fly the nest (James Stephens, Jeff Osterhage, Lee Montgomery, all OK, I guess). Reuben takes them under his wing, reluctantly, as they sign on to guard a gold shipment from bandits. That’s pretty well the plot. Mattie (who has both arms in working order) tags along, annoyingly. Rooster is supposed to be escorting her to her grandfather in California because her mother has now died and she is an orphan but Rooster has gambled away the money Lawyer Daggett had given him for the purpose and so he needs a job.


The title was pretty dumb. True grit is a quality and it can’t have a further adventure. There’s a bridge in South Pass City that looks very like the one Keith Carradine got shot off in McCabe & Mrs. Miller. One of the outlaws is named Henry Bast but his wanted poster reads Henery Bast. Rooster has a pepperbox derringer which comes in handy. There’s a cabin and an ultimatum lifted from 1969.


Well, well, people have been dismissive of this movie, and with some justification, but it isn’t as bad as all that and if it comes on, you could watch it.