The finest Western Peck ever made


Well, I'm standin' in line in the rain to see a movie starring Gregory Peck
All I remember about it was it starred Gregory Peck,
He wore a gun and he was shot in the back.


Well, any serious Western fan will remember a lot more about The Gunfighter than Mr. Dylan did (shame on you, Bob), for it is one of the finest examples of the genre ever made.


Gregory Peck (1916 – 2003), one of the greatest of all Western actors, stars as a killer wanting to hang up his guns and settle down on a small ranch with his wife and son but is prevented from doing so by the young “squirts” on the glory trail, anxious to make a name for themselves by killing the famed shootist. A cliché, you may say. Well, it wasn’t then. This was the archetype of that legend. 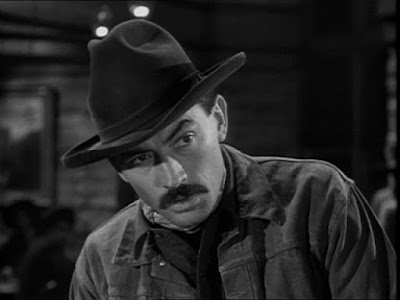 Gregory Peck, one of the great Western actors
It is a legend, of course, as was the whole notion of ‘the fastest gun in the West’. The name chosen for the central character, Jimmy Ringo, is redolent with myth. John (often in movies referred to as Johnny) Ringo, although in fact not a notorious ‘gunfighter’ at all, is the dashing name used to define a celluloid fast-gun outlaw of the mythical West. By calling him Jimmy Ringo, writers William Bowers and André De Toth immediately established him as a figure of Wild West folklore. 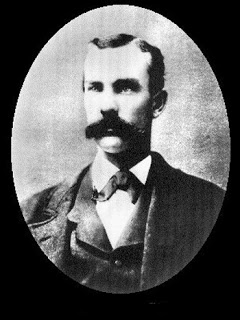 The real John Ringo
John (not Johnny) Ringo, the real one, despite the 1959/60 CBS TV series or the cheesy 1964 Lorne Greene song (see amusing video) and numerous appearances (played by John Ireland, Henry Brandon, Myron Healey, Jim Davis, Uncle Tom Cobley and all) as a psychopathic ultra-skilled gunman in various Wyatt Earp films like Wyatt Earp or Tombstone, was no aristocratic, educated, lightning-fast gunslinger. There’s a good book on him by Jack Burrows which I enjoyed and recommend, John Ringo: The Gunfighter Who Never Was (University of Arizona Press, Tucson, 1987) 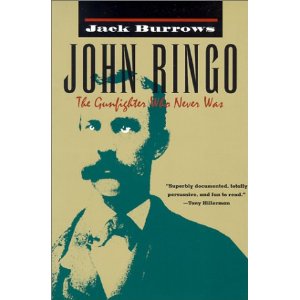 Good book
Ringo (John Wayne) was also the free ex-convict in Stagecoach, of course. To a Western fan, the name Ringo had instant semiotic impact. Actually, there's an interesting Wayne connection to The Gunfighter: Columbia boss Harry Cohn had bought the script with Wayne in mind but Wayne was still so angry at the way Cohn has mistreated him when he was a contract player for Columbia (he did three dire Westerns, 1931/32, but was then fired) that Wayne wouldn't do it, though he longed for the role. In the end neither side would bend and Cohn sold the script to Fox who engaged Gregory Peck, and John Wayne as The Gunfighter was a might-have-been. How different would it have been? Well, it depends if you believe that there is such a thing as 'a John Wayne Western' or 'a Gregory Peck Western', I suppose.

Peck was magisterial in Westerns. He did the odd mediocre one, like Shoot Out (Universal, 1971) but most were first class. Yellow Sky (Fox, 1948) and The Bravados (Fox, 1958), in particular, were top-drawer films. His height (he was 6' 3") and athleticism and quiet, stoical style suited Western roles very well and he was a fine actor. Like Gary Cooper he was capable of transmitting subtle nuances (only occasionally required in the genre…) He was not always lucky with his directors and scripts but even in the weaker vehicles he added class and in the better ones he was magnificent. The Gunfighter must rank as the best ever.


Despite its publicity poster, the picture has none of the lurid quick-draw showdown-at-noon about it. No dash and color and zip. Black and white, indeed, noir, somber, like High Noon or the first 3:10 to Yuma, it shows a haunted man whose past is coming up like dark shadows from behind, and only the faint glimmer of a future lies before him. It’s moving, powerful and tense. 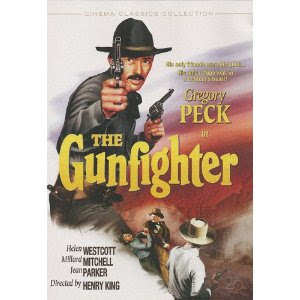 Rather misleading. Nice artwork though.
It is really an existential stage play and the action, which more or less respects the classical unities, takes place in a common saloon. It’s a proper tragedy in the sense that an essentially noble hero is doomed by fate. Even at the lowest level, any middle-aged man tired of office politics or struggling to keep up will identify with Peck. But the film soars far above that into high tragedy.


Producer Nunnally Johnson, no mean scriptwriter himself, and director Henry King (who also did The Bravados) worked with writers Bowers and André de Toth and a solid team of supporting actors.
Millard Mitchell in particular is fine as the brisk, no-nonsense marshal. He only did three Westerns, this one, Winchester ’73 and The Naked Spur (he chose three of the best Westerns of the 1950s), but was very good in all three, probably best in this. 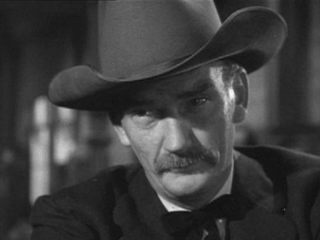 Millard Mitchell. Pity he didn't do more Westerns. He was a Sam Elliott ante diem.
Karl Malden, usually an overacting embarrassment, is not too bad this time as the barman, and Skip Homeier is effective as the punk kid who wants to be a gunman. This was only Homeier’s second Western and he went on to carve out quite a career of the Punk Kid role, making it his own - see, for example, Ten Wanted Men (1955), and a long list of appearances in TV Westerns. A young Richard Jaeckel is the first would-be gunslinger kid to bite the dust, in the first reel. 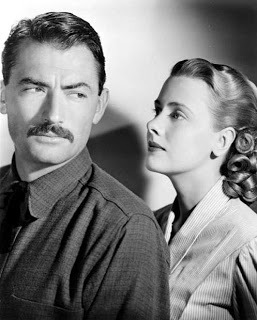 Helen Westcott is the estranged wife of Ringo. Ms. Westcott had got a big part in a Guinn ‘Big Boy’ Williams Western in 1934 but this was only her second outing in the West. The following year she had a smaller part in a Glenn Ford Western, The Secret of Convict Lake, and in ’52 she was female lead opposite Lex Barker in Battles of Chief Pontiac. But the rest of her Westerns were B-movies and, later, TV shows. She is good in The Gunfighter as Peggy, if rather virginal and prim. Well, she is a schoolma’am. The secondary female role is Molly (Jean Parker) and really, as Mrs. Ringo is a schoolteacher she ought to have been named Molly, as The Virginian had established Mollys as schoolteachers in the West. If you wanted to show that a woman was ‘good’, you made her a schoolma’am. Maybe a nurse (Four Faces West) but usually a schoolma’am. Gene Tierney tried to be ‘good’ as a journalist in The Return of Frank James but it was just too racy.

There aren’t many other parts. It’s not at all a big Western. What it is, however, is an exciting, tense drama which is a good movie even if you don’t like Westerns (what an absurd idea). 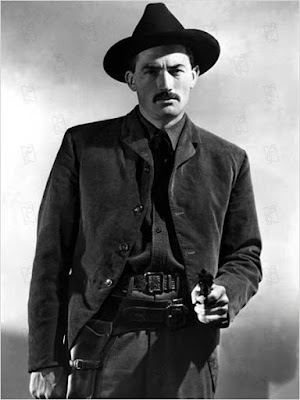 Just right
Arthur C Miller did the (largely interior) photography and managed to create something of the lowering, dark tension that he did in The Ox-Bow Incident in 1943. Actually, the town street was the same one used in The Ox-Bow Incident. Sad, isn’t it, how I know things like that. You don’t think I’m obsessed, do you?

The film wasn't a box office hit, partly perhaps because it's downbeat and dark, partly because for some reason studio boss Daryl Zanuk took a disliking to it and didn't push it.


By the way, there’s a hilariously bad trailer for the movie in which the same Gene Tierney (for some reason I know not as she has nothing to do with the picture) faces the camera and reads some nonsense off a card and her eyeballs swivel like ping-pong balls. Do watch it on YouTube if you can. You’ll laugh all day.


But as for the movie itself, it’s in the unmissable class and the finest Western Peck ever made. You really need to see it. Trust me.