For a Fistful of Yen

Sukiyaki Western Django is a way cool, 21st century spaghetti Western in the Quentin Tarantino mold. In fact Mr. Tarantino seems to be the godfather of the picture and appears in it as the lantern-jawed gunman/narrator in a poncho. 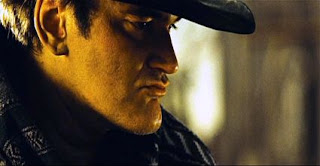 Quentin is MC
The movie is bloody, garish and has a derivative plot, there are stretches of tedium between the over-the-top action, and it has lousy dialogue, so in these respects it is pure spaghetti. But it’s spaghetti (sukiyaki is a Japanese foodstuff in the same way spaghetti is in Italy) in that knowing modern way, with plenty of references for the Western fan to pick up on, a pastiche perhaps, even a parody, or, if you are being generous, a homage. 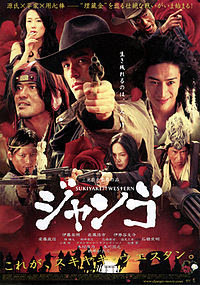 Eastern Western (or Western Eastern)
It’s yet another Yojimbo story and in a way that is fitting because that theme is archetypal of the spaghetti genre. A lone gunman comes to a town dominated by two criminal gangs and vacillates between the two. Carnage is the inevitable outcome. Of course Sergio Leone got into legal hot water for making A Fistful of Dollars (though I bet he made enough fistfuls to pay off his lawyers) because he did not credit or seek the permission of Akira Kurosawa, who had made the same story, as Yojimbo, in 1961. It was in many ways a ridiculous quarrel (“culture theft”, how absurd) because Kurosawa himself was more than a little influenced by American sources and if you read Dashiell Hammett’s The Glass Key of 1931 (or see the subsequent film noir) you will see how. The story has flitted back and forth between America, Japan and Italy, and doubtless other countries too, and why should it not? 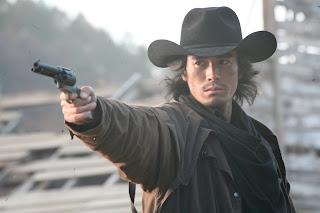 Hideaki Itô as Clintish gunman with no name
The film was directed and co-written by Takashi Miike, an alumnus of the cranked-out straight-to-video pulp genre in Japan who broke through into trendy mainstream pictures, often containing much violence and sex, and developed what is known as a cult following (code for making trashy as well as entertaining films). Mr. Miike is probably an auteur, heaven help us. He speaks no English yet decided to have his actors (including Tarantino) do the picture in ‘English’, a phonetically rendered screenplay that sounds always bizarre and often unintelligible, perhaps in reference to the shocking dubbing of many Italian Westerns. I was reduced to watching it with subtitles, and as I live in France and dear old Netflix, in its wisdom, only gives me the choice of French subtitles or none, I watched a Japanese film in English with subtitles in French, a slightly odd experience. Still, I needed the subtitles and, I suggest, if you watch this movie you will too (preferably in your own language). It sounds especially weird when the actors use American colloquialisms. 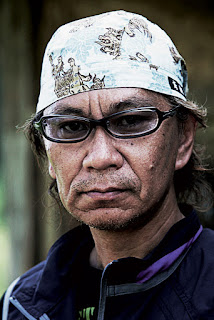 Takashi Miike
The story is either set in a very Japanese-looking Nevada or a very American-West kind of Japan (it was shot in Yamagata, Japan). The characters have samurai swords and 1960s gunbelts and Colts, and they wear robes and dusters, and headbands and Stetsons. 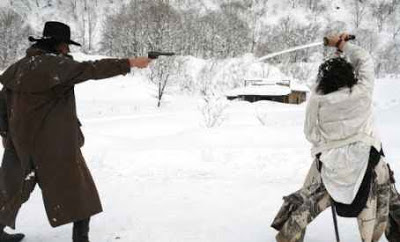 Swords v Colts
There is some use of stylized painted backdrops. A very saturated yellow coloration dominates, perhaps a reference to the lurid colors of 1960s Italian Westerns. ‘Musical’ whistling tells us it’s a spaghetti (as if we hadn’t guessed) and there are those stupid phew-phew noises when they twirl guns or holster them. The two gangs who infest the town are the reds and the whites, and there are several references to the Wars of the Roses in fifteenth-century England. In fact the boss of the reds, Taira no Kiyomori - apparently the characters were named after actual historical figures in the Tale of the Heike - (Koichi Sato) decides that henceforth he will be known as Henry in honor of Henry VI.
There’s a little boy born of a Romeo & Juliet-ish love match between a red and a white. The reds remind us of the gang of thugs in Django and later we see a casket towed in the mud with a cross on it (the rather unJapanese cross symbol is used a lot in the movie, and the cross that finally impales the unfortunate sheriff bears the name Mercedes Zaro, as the one in Django did) – and of course the coffin contains a machine gun. We all know how keen Quentin was on Django (five years later his own tribute, Django Unchained, appeared). Sukiyaki Western Django is as much Corbucci as it is Leone. But there are also geeky references to Rambo and The Quick and the Dead (the hole shot through the middle of a character). 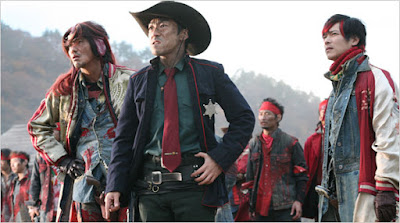 The pusillanimous sheriff
There’s a Japanese degüello played by a lone trumpeter, and the Clintish no-name ‘hero’ (Hideaki Itô) announces that a man’s gotta do what a man’s gotta do. Mr. Miike has obviously seen a Western or two. The saloon is called Eastwood’s. There’s a dwarf (hope that’s an acceptable word; not sure). One character has a saddle roll of guns like Colonel Mortimer. There’s a Djangoesque cemetery. The red boss wears a protective breastplate. There’s certainly no shortage of spag references. Even more happily, a derringer figures in the last reel, so that put the picture up in my estimation. 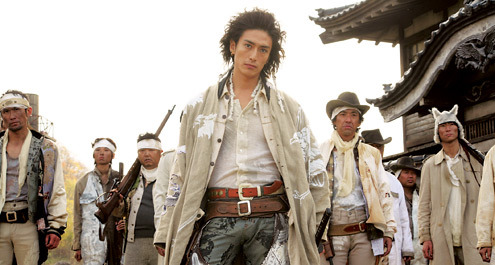 Yüsuku Iseye is leader of the whites
It all ends with Japanese djangly music and we are told that the little boy goes off to Italy when he grows up and becomes Django.


Sukiyaki Western Django is quite fun, even for spaghetti-loathers, and it does repay a watch, if you like gory pastiche. But it does rather labor the point, I think. It’s 121 minutes long and, for me, the joke wore off well before the end.