Tim Holt’s Westerns for RKO were quite fun. Most were juvenile programmers and as such hardly great art but they had a certain zip about them. Holt had a youthful appearance and a winning smile (as he and his partner Chito run a stageline in Arizona we must assume that the film’s title applies to him). His first appearance in an RKO Western was as the Tonto Kid in The Law West of Tombstone (in which he was second billed after Harry Carey). His first RKO Western lead was as the Fargo Kid in the movie of the same name in 1940. One look at his boyish face will tell you why he got ‘kid’ roles. All through the 1940s the entertaining (if innocuous) Westerns came thick and fast. 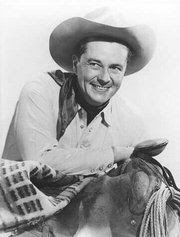 Tim Holt
Occasionally he did a more serious film: he worked twice for John Ford, as the young cavalry lieutenant in Stagecoach in 1939 and as Virgil Earp in My Darling Clementine in 1946. Most notably he showed that he could really act in a serious picture when he was Curtin, one of the gold seekers, for John Huston in The Treasure of the Sierra Madre in 1948. But he will be mostly remembered for his black & white hour-long second-feature oaters, especially those in which his sidekick was Chito Jose Gonzalez Bustamante Rafferty (Richard Martin), the amorous swain who, however, runs a mile whenever matrimony looms. And indeed, these Westerns are fun. 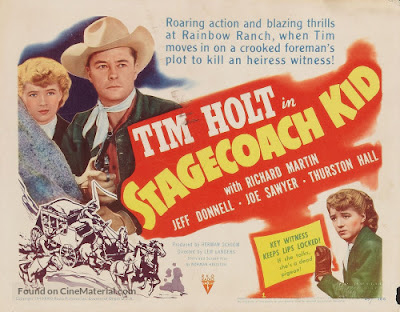 It probably satisfied the juvenile audience in '49
Sadly, though, Stagecoach Kid was one of the weakest of them. It followed the same plotline as usual, i.e. Tim and Chito foil a skullduggerous plot with much gallopin’ and shootin’, but it seemed to lack the usual get up and go. This may be because the director was Lew Landers. Usually Holt had Edward Killy or Lesley Selander at the helm, both more than competent, but Landers hadn’t got the same ability. He was one of those directors known for churning out programmers on time and on budget without much interest in whether they were any good. 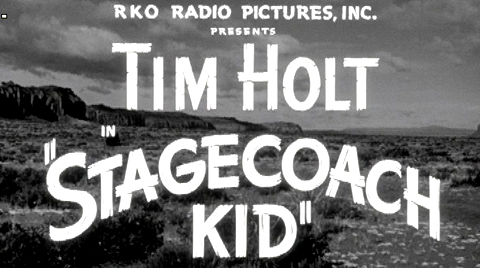 You'd be better off with another in the series
Stagecoach Kid was quite unusual in that at the end Tim got the girl. He didn’t usually. Chito flirted with them but Tim remained chaste. But in the last reel of this one he has Jessie on his arm and married bliss beckons. Jessie was played by Jeff Donnell, who, unlike me, took her first name from 50% of the duo with Mutt in the cartoon strip. Apparently she was besotted with the characters. She specialized in tomboy or bobbysoxer parts and indeed, in Stagecoach Kid she dresses up as a boy (most unconvincingly) and calls herself Jesse James. All the cowpokes around are fooled by the rambunctious youth (they must have been seriously dumb) and it gives Tim the chance to spank her, daringly, which Hollywood loved. Later, though, she is unmasked and changes back to a dress and rides sidesaddle. 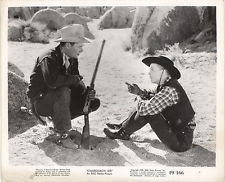 A myopic Tim with 'Jesse'
Her dad is a rich businessman from San Francisco (Thurston Hall) who has brought his daughter out to Arizona to a ranch he owns to get her away from an unsuitable suitor. She is a spoiled brat. However, crooked ranch foreman Thatcher (reliable heavy Joe Sawyer) and his henchmen Parnell and Clint (Robert Williams and Robert Bray) have taken over the hacienda and drunk all the whiskey and smoked all the cigars, not to mention sold off the cattle. They want to kill the owner before he arrives and discovers the naughtiness but the henchmen are singularly incompetent and every attempt fails (mostly foiled by Tim & Chito). 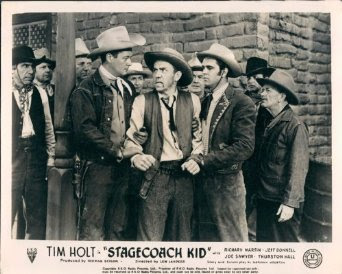 Tim and Chito nab a villain
Kenneth MacDonald is the sheriff and Harry Harvey is the clerk of the stageline, so that’s all good. The music is by Paul Sawtell so that’s OK too. But honestly, I wouldn’t bother. Try Guns of Hate instead. Or better still, Rustlers - that one has a derringer in a cake.