Preston still had it

The main reason why September Gun is enjoyable (and it is, quite) is Robert Preston. The old fellow still had it, in spades. He was 65 but had lost none of his roguish charm. He plays an old gunslinger (we are in the 1890s, we suppose) who knew all the old greats – Wyatt Earp and Wild Bill Hickok are mentioned, as well as Butch Cassidy. 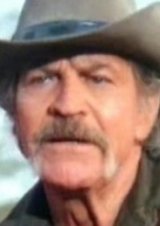 Old gunslinger Preston
Preston had started Westerns way back in 1939 when he was fourth-billed as smoothie derringer-wielding Dick Allen, Joel McCrea’s rival for Barbara Stanwyck, in Union Pacific. And the charming-rogue part that he began there became his stock in trade. He was up in Canada with Gary Cooper the following year, in North West Mounted Police, expanding his charming-roguishness, and by the late 1940s he virtually had a patent on the part, as Whispering Smith showed. Tate Riling in Blood on the Moon, The Wichita Kid in The Sundowners, the two-timing detective boss in Best of the Badmen, the roles succeeded each other until Preston was a charming-rogue fixture in Westerns. Probably his finest Western performance was as Steve McQueen’s dad in Junior Bonner, where he excelled himself in charming-roguery. And in September Gun this capacity is exploited to the full. 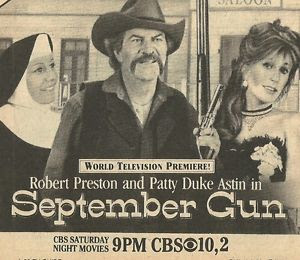 Trashy poster
The movie is pretty derivative and owes a lot to Rooster Cogburn and Two Mules for Sister Sara, because coarse, cranky Ben Sunday (Preston) teams up with a nun (Patty Duke from Valley of the Dolls) and there is much rubbing each other the wrong way before, inevitably, there is a meeting of minds. At least this nun hasn’t applied half a ton of false eyelashes and mascara, as Shirley MacLaine did in the Clint movie. 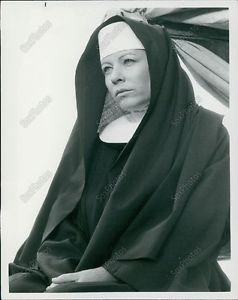 Discreet make-up
Sunday rides with a young nephew, Jason (David Knell) who aspires to the métier of gunfighter but is pretty hopeless. Sunday is tolerant of his incompetence. Actually, the part of the nephew is wishy-washy and Mr. Knell wasn’t the actor to impose any sort of oomph on the role.


A far better riding companion, though, is Stonewall, an old yellow dog who is too lazy to walk much and won’t get his paws wet crossing streams, so rides pillion with his master. I liked Stonewall.


The trio (Sunday, Jason, Stonewall) bring Sister Dulcina (Duke) and a gang of orphan Apache children up into Colorado where, for some odd reason, she wishes to establish a school for the kids. The town she opts for is, however, treed by ne’er-do-well saloon owner Jack Brian (pre-Back to the Future Christopher Lloyd). In fact Brian has set up his saloon in the disused church, which Sister Dulcina wants to use for a school. So there’s gonna be trouble… 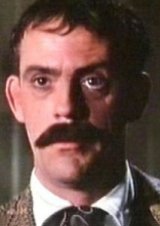 Saloon owner Lloyd. Looks quite authentic in fact.
Brian has two sons/henchmen and one of them is Jon Gries, which is good. You remember Jon Gries: he was the young boy Horace in Will Penny, directed by his father Tom. He was later in another September movie, September Dawn, and very bad it was too, though he was about the best actor in it.


Geoffrey Lewis is the broke-down drunk sheriff who can’t stand up to Brian – till Sunday comes along. 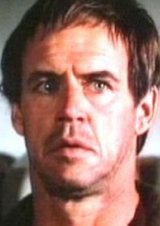 Drunk Sheriff Lewis
The movie was directed by Don Taylor, a former actor who won an Emmy for directing an episode of Night Gallery. He does a decent job, with not a lot to go on, screenplay-wise. There is one good line: Preston, exasperated, says, “I never drew on a nun.” Then adds, “Yet.”


It was shot around Tucson so we get plenty of saguaros in bright color.


Jason tries to make his uncle an iron breastplate for the upcoming showdown (he must have seen A Fistful of Dollars) but Sunday shoots a hole right through it so that was no good. Sunday does this with a derringer which he keeps in his boot. Any Western with a derringer in it gets additional points from me.


Have a go at September Gun if you come across it. I think you’ll enjoy it. Don’t expect too much; it isn’t a great Western. But it’s a fair bit of fun.