In Jesse James Rides Again, a Republic 13-part serial of 1947, all sorts of crimes are laid at Jesse’s door so he determines to hit the trail to unmask the raiders and prove his innocence… It’s odd that he wants to unmask them because Jesse is so obviously the Lone Ranger without his mask, though his dashing frock coat is rather better than the Lone Ranger’s tutu, it must be said. Anyway, it’s a children’s programmer. 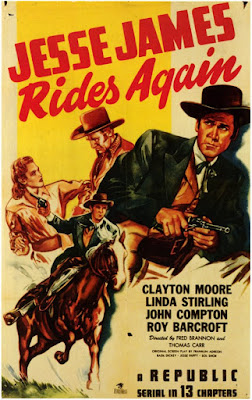 
The serial follows the traditional cliff-hanger format. Jesse has reformed and wishes to settle down. But so many crimes are committed in his name (of which he is entirely innocent, natch) that he has to catch them durned bandits to clear his name. You get the idea. Jesse and his pal ‘Steve Long’ (John Compton, colorless) wander the West where they defend homesteaders from cloaked and masked raiders, KKK-like but in black.


It must be said that this Jesse is very Lone Rangeresque, ridin' the range and rightin’ the wrongs. 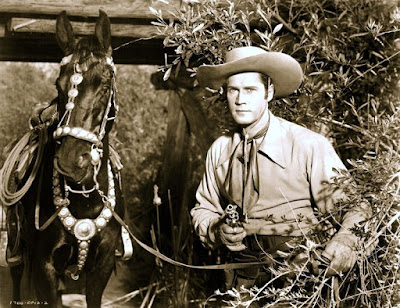 Unmasked
Linda Stirling was the love interest (for Steve) but she got pregnant and was written out round about episode 7. But I don’t think the young boys who went avidly along to see the serial on Saturday mornings probably minded much.


The chief bad guy, Clark, is played by a reliable Republic villain, the splendidly-named Tristram Coffin. Clark wants the whole valley, you know how villains do, and is determined to drive all the decent farmers out, because there’s oil in that thar land. Clark discusses this heinous plot with his henchmen every week in case any kids haven’t seen previous episodes.


There are the usual heavies and slick criminals. And there are of course lots of fights and chases - stuntman Tom Steele and team being kept pretty busy. Republic had a reputation for the best stuntmen in the business. There’s a Tennessee/riverboat thread to the plot too. All good, clean fun.


Directors Fred C Brannon and Thomas Carr did a good job, in fact, with action aplenty in each episode and there are lots of pyrotechnics.

Then soon after, in 1948, Clayton was back. Adventures of Frank and Jesse James is another Republic serial. This time the stunts were even better because Yakima Canutt was director with Fred Brannon. 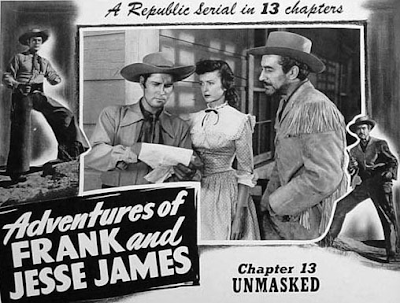 Another fun serial - with Frank this time
Adventures has Frank in it (Steve Darrell). Again it’s 13 fifteen- or twenty-minute episodes for boys to thrill to. It has the same plot: badmen are committing crimes and blackening the James boys’ spotless reputation. Frank and Jesse have to catch them and stop this naughtiness. There are collapsing mines, exploding bombs, and runaway coaches.


The trailer tells us that “the most fearless adventurers in the West join the forces of law and order to prevent desperadoes from committing crimes in their name”. And it assures us that “the screen explodes with exciting danger!” Bet you can’t wait.


In 1949 Republic made yet another Jesse James serial, The James Brothers of Missouri, again with Fred Brannon at the helm, but this time starring Keith Richards (no, not that one) as Jesse and Robert Bice as Frank. But that will be for another day.