Hollywood loved the Texas Rangers. Of course silver screen Rangers were all noble and there were no incompetent, brutal or racist men among them. Mike Cox, in his book The Texas Rangers: Wearing the Cinco Peso, 1821 – 1900 (Forge, 2008), lists no fewer than 118 movies from 1910 to 1995 featuring Texas Rangers. Zane Grey’s best-seller The Lone Star Ranger of 1915 had been a seminal work of Ranger mythology; it was a silent movie twice (1919 with William Farnum and 1923 starring Tom Mix) and a talkie in 1930 with George O’Brien as lead. Buck Jones starred in The Texas Ranger in 1931.


In 1935 Walter Prescott Webb published his book The Texas Rangers: A Century of Frontier Defense, extolling their virtues in glowing terms. This will give you a flavor:


The real Ranger has been a very quiet, deliberate, gentle person who could gaze calmly into the eye of a murderer, divine his thoughts, and anticipate his action, a man who could ride straight up to death. In fatal encounter – the last resort of a good officer – the Ranger has had the unhurried courage to take the extra fraction of a second essential to accuracy which was at a premium in the art and the science of Western pistology.


Webb’s Rangers were thus gentle, telepathic killers. But his writings were very influential and it is certain that King Vidor and co-writer Elizabeth Hill (Mrs. Vidor) had read him. Vidor was looking to make an epic, big-budget patriotic Western the following year, Texas’s centennial. He produced, directed and co-wrote with his wife the motion picture The Texas Rangers; it was thus a personal project. The resulting movie (like the Zane Grey tale, it would be remade, so the legend has been durable) was by modern standards a corny whitewash but still, it has its points. 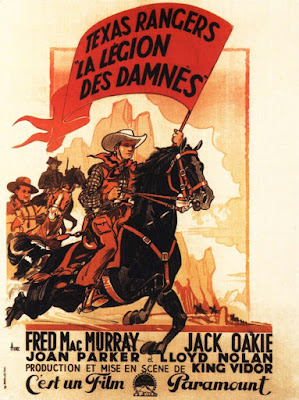 French poster rather good
The story is one of three happy-go-lucky outlaws, Jim, Sam and comic-relief Wahoo. They rob stages humorously and exchange badinage. But they get separated, and Jim and Wahoo, hard up and jobless, join the Texas Rangers, while Sam goes it alone, leading a gang of rustlers. When they run across Sam again (he's rustling), Jim’s plan is to get the inside information on gold shipments and the like so that Sam and his bandidos can steal them.


Wahoo is the first to get religion. He likes it in the Rangers and doesn’t want to be a badman anymore. Jim has no truck with this and continues his nefarious collaboration with Sam until he too realizes that he is more Ranger than outlaw and he makes a deal with Sam, now known as the Polka-Dot Bandit, under the terms of which each will leave the other alone as both go their separate ways.


That’s about the plot. Of course there’s a girl for Jim to romance, the Rangers Major’s daughter, Amanda, and there’s a feisty orphan boy, Davy, whom the compadres rescue from an Indian attack on his family’s cabin – he now lives with Amanda. Neither Jim nor Davy wants anything to do with girls and civilized domesticity at first but both are eventually worn down and subdued.


They got Fred MacMurray to play Jim Hawkins (no relation to RLS). He was a Paramount contract player who had risen to stardom and in 1935 he had played opposite Claudette Colbert, Katharine Hepburn and Carol Lombard, but he had never done a Western, so it was something of a risk. He acquitted himself well, though, and was quite convincing as both a light-hearted outlaw in the first reel and the tough Texas Ranger later in the movie when it gets much darker and more serious. MacMurray would go on to make eleven more Westerns (see for example Gun for a Coward or Face of a Fugitive) and was surprisingly good in them. The Texas Rangers part had originally been intended for Gary Cooper, though, and while Fred may make a fair fist of it, he was no Coop. 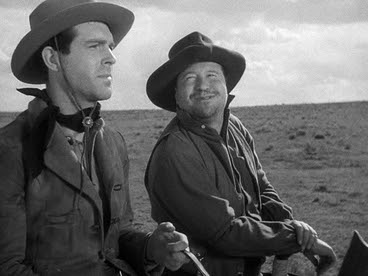 Fred rides the range with Jack Oakie
Sam McGee, the outlaw pard who would go on to be the bandit king Polka-Dot, was played by Lloyd Nolan. Nolan had also found success at Paramount, getting two lead roles in 1935 and starring with James Cagney and George Raft – gangster movies were his thing. The Texas Rangers was his first time in the saddle too. He would go on to get a biggish part in Wells Fargo with Joel McCrea the following year but would only do five Western movies in his career, though he became a regular on Western TV shows in the 50s and 60s. He’s not terribly convincing as bandit chief, I fear, though he does try for a certain charming-rogue style with a hint of steel beneath. 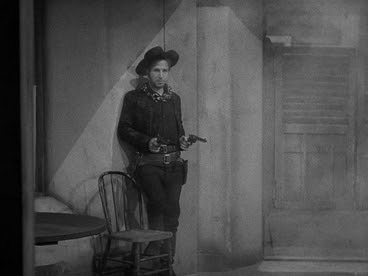 Lloyd Nolan as the Polka-Dot Bandit
As for the comic-relief Wahoo Jones, that part went to popular comedian Jack Oakie. Oakie had been a big-name star of comedies and musicals through the end of the silent era and into the talkies (despite being functionally deaf). His contract with Paramount was not renewed in 1934 but he occasionally worked for the studio in a freelance capacity and had starred with Clark Gable and Loretta Young in the 1935 The Call of the Wild. He certainly makes the most of his role as Wahoo. 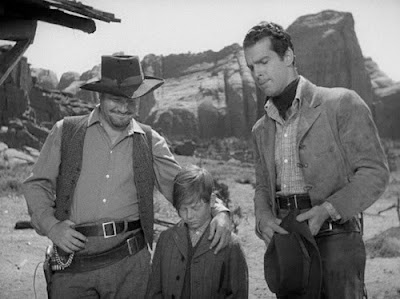 As they rescue a kid in the first reel and are kind to him, the outlaws are obviously goodies
These three were joined by Jean Parker as Amanda. Yet another in her first Western, she would go on to do quite a few – she would be Molly in The Gunfighter in 1950.


So the cast isn’t bad, though by no means Western specialists.


Gabby Hayes is a corrupt judge, amusing as ever.


Some of the black & white photography, by Edward Cronjager, is very good (Cronjager was a real artist). The locations were in New Mexico, in fact, not Texas, but never mind. There’s also some stirring music by Gerard Carbonara – though the intro and outro ballad is cheesy.


I actually prefer the 1949 color remake, Streets of Laredo, mainly because it starred William Holden, who was an outstandingly good Western actor. But still, the original The Texas Rangers is well worth a watch. It almost made three revolvers. Might have made four with Coop as star. 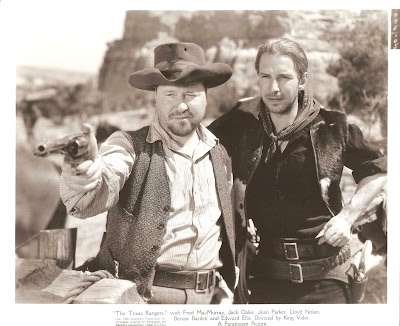 Wahoo and Sam, outlaw buddies, later on opposite sides of the law
Posted by Jeff Arnold's West at 10:03 AM