All Western fans know Clint Walker as Cheyenne Bodie on TV from 1955 on, and they will also probably be well aware that he did some big-screen Westerns too, especially later in the TV series when he felt trapped in the Cheyenne role. In 1958 the excellent Fort Dobbs came out. Directed by Gordon Douglas, written by Burt Kennedy and co-starring Virginia Mayo and Brian Keith, this was a tense, actionful Western with a lot to recommend it. (The year before, two episodes of Cheyenne were tacked together and released as a movie, The Travellers but that doesn’t really count). In 1959 Clint was Yellowstone Kelly, also quite good, again directed by Douglas and again written by Kennedy. He was apparently Custer in Requiem to Massacre (an odd title) in 1960 but I know nothing of this movie. In ’61 he starred in Gold of the Seven Saints, with, yup, Gordon Douglas directing, but this was not so good, partly because this time there was no Burt Kennedy writing and partly because Roger Moore was the co-star. In 1966 came The Night of the Grizzly. 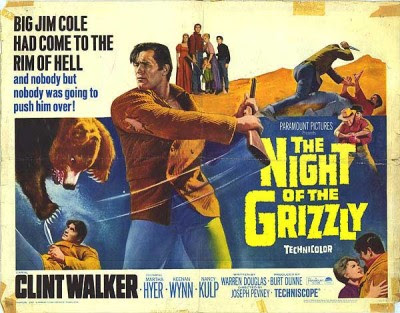 OK if you like that kind of thing
I have to tell you right off, though, dear e-readers, that The Night of the Grizzly is an example of that dread genre, the family film. In fact at times it verges on that most depressing of terms, the heart-warming. I’m afraid I’m too old and cynical and hard-bitten to appreciate schmaltzy movies, especially Westerns – which need to be tough, gritty and tense.


It’s about Big Jim Cole (Walker), a retired lawman from Utah who inherits a broken-down farm in Wyoming, maybe, or Montana (we are not told) and settles there with Sam Potts, his erstwhile deputy (Don Haggerty), his wife Angela (Martha Hyer), niece Hazel (Ellen Corby), son Charlie (Kevin Brodie), baby daughter (unknown actor) and dog (ditto). Quite a family. There’s a scheming landowner (Keenan Wynn) with loutish sons who wants Clint’s farm but the real problem is a grizzly bear, called Satan by the locals, which kills livestock with abandon, including Clint’s prize bull. It kills Sam Potts. Hell, it even nearly kills Clint’s dog. Satan’s footprint is even bigger than Clint’s. Clint has to kill that bear. His wife wants to leave (“The bear or me”) but in the best Western tradition he tells her, “A man can’t run away.”


Actually, I thought Sam Potts only had one arm (watch Major Dundee) but this one has two.

Clint has to have a woodcutting scene so he can take his shirt off and show his beefiness.
He's with a two-amed Samuel Potts.
For comic relief there’s an aging town spinster named Wilhemina, called Bill (Nancy Kulp), who takes a shine to old Sam Potts, and the great Jack Elam is a town layabout (he would have been a drunk in most Westerns but it’s a family film) who equally takes a shine to the baby daughter and becomes an adopted family member, heart-warmingly, taking over from the late Sam Potts. There’s also a skunk and a drunken rooster to up the smile quotient among the family audience.

Jack Elam doing his comic bit
It’s all shot in Technicolor with two credited cinematographers, Harold Lipstein (Wichita, Pillars of the Sky) and Loyal Griggs, no less (Shane, Paint Your Wagon), and it’s all very pretty – it was shot in the San Bernadino National Forest. There is, though, wildlife footage from elsewhere crudely intercut. It was the last movie of director Joseph Pevney, mostly a TV director (especially Wagon Train).


Clint sings in that light but quite pleasant baritone voice he had, and nearly always in tune, a hymn to his wife, 'Angela'. 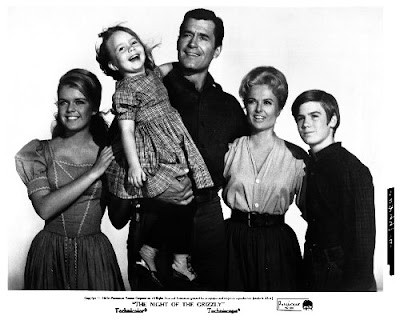 The heart-warming family
The best bit of the movie is when a bounty is put on Satan’s head and Leo Gordon is the bounty hunter (or bounny hunner as they all call him) who comes north to kill the bear and claim the bounny. He is a former foe of Clint’s down in Utah and so we are meant to think Leo is as keen to get Clint as the grizzly. Heavy Leo Gordon, San Quentin ex-con, was a seriously frightening man and usually he has to fight some weedy star and be beaten, a quite absurd outcome. At last, though, Leo has two worthy adversaries to grapple with, Clint (6 foot 6 inches with a 48” chest) and the grizzly bear (similar dimensions).


Well, it all comes to a climax when the brave but foolhardy son sets out alone after the bear and Clint goes after him. There’s a three-way Clint/Leo/Grizzly showdown.


You could watch The Night of the Grizzly. You wouldn’t exactly die of boredom and you’d have Elam and Gordon to entertain you. But it is far from a good Western and far from Clint Walker’s best work.