Hollywood was always interested in the bounty hunter. In Westerns this breed of gunman was ambivalent, a badman acting as a sort of lawman, a fellow with base motives (money) yet bringing dangerous criminals to justice for the good of society. It wasn’t easy to make a bounty hunter a hero: when Steve McQueen was pursuing villains on TV for the bounty in Wanted: Dead or Alive the positive side of catching criminals had to be played up and the financial side quietly forgotten (it's a wonder Josh made a living because he so often donated his bounty to worthy widows, etc.) In movies the bounty hunter bringing in a corpse draped over a saddle was often shunned as a lowlife but he was a kind of hero nevertheless; think of Henry Fonda in The Tin Star as an example. Sergio Leone didn’t bother about the hero business: in For a Few Dollars More (a movie which definitely cites The Bounty Hunter) his bounty hunter (Lee van Cleef) has few pretensions to nobility; he’s just a ruthless gunman. But that was a spaghetti and as we know, spaghettis aren’t proper Westerns.


Of course the whole ‘dead or alive’ notion was phony. In 1872 the Supreme Court in Taylor v. Taintor ruled that bounty hunters were a part of the law enforcement system.


Whenever they [those pursuing fugitives] choose to do so, they may seize him [the person who has skipped bail] and deliver him up to his discharge; and if it cannot be done at once, they may imprison him until it can be done. They may exercise their rights in person or by agent. They may pursue him into another state; may arrest him on the Sabbath; and if necessary, may break and enter his house for that purpose.


But there was no authorization to kill the fellow. Most of those ‘Wanted Dead or Alive’ posters you see are modern inventions derived from the celluloid West. Phony
Still, since when have we allowed a mere detail such as historical fact to get in the way of enjoyment of a Western on the screen?


The Bounty Hunter was Randolph Scott’s 48th Western and one of the series he did with Warner Brothers. It was shot in 1953 when Scott was already 55 years old but he could still romance the girl and convince as an action hero. In fact Scott was one of those fortunate men who grew more handsome as he aged and the 1950s were in many ways his golden age. The Bounty Hunter is not the best of the Warners Westerns (that was probably Carson City) but it’s pretty damn good nevertheless. 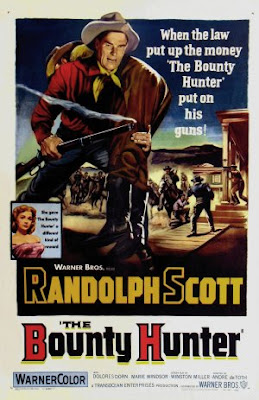 A goodie
It was the last Western Scott did with director André De Toth. De Toth had loved the Western, that most American of film, and had made five starring Randy before this one, and he had a high regard for Scott. But De Toth wanted to move on. While he spoke highly of Scott as a good Western actor, he didn't warm to him. He once called him an abacus, a reference to Scott's habit of counting his money, and reading The Wall Street Journal between takes on set.

A curious fact is that De Toth made rather a thing of 3D pictures – one of his most famous films was the 3D horror movie House of Wax, shot the same year as The Bounty Hunter - and this was odd for a one-eyed man who couldn’t see in 3D at all. 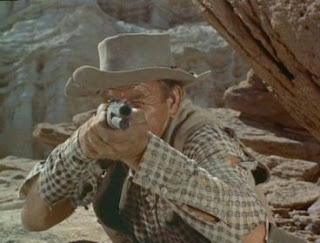 3D. Duck!
The Bounty Hunter was designed as a 3D (the format was all the rage in ’53) and thus has much aiming guns at the camera (and a sheriff’s hat shot off which whizzes into the audience’s face) but it was released in ’54 in standard format, which is how we all see it today of course.

André De Toth's last Western with Scott
The Bounty Hunter is the story of notorious Jim Kipp (Scott), ruthless hunter-down of wanted men who, in the classic Western way, shoots a fugitive in the rocks in the first reel, brings the body in flung over the man’s own horse and dumps it at the sheriff’s office, demanding the $500 reward. He won’t even give back ten bucks of the price for a pine box. He’s not there for charity. In town, he is feared and shunned. He is told, "Well, you know what they say about you, you'd turn in your own grandmother on her birthday if there was a reward on her."


It turns out later, of course, that Jim Kipp’s pa owned a store and was shot and killed there by robbers. Jim was too young then to do anything about it but when he was old enough he vowed to devote his life to bringing in such villains, dead or alive. So really, he’s a fighter for justice. Well, he was Randolph Scott. Later in the story he does his Randy act and we see the pain on his face as he remembers his daddy’s demise and we sense his Scott-ish nobility. 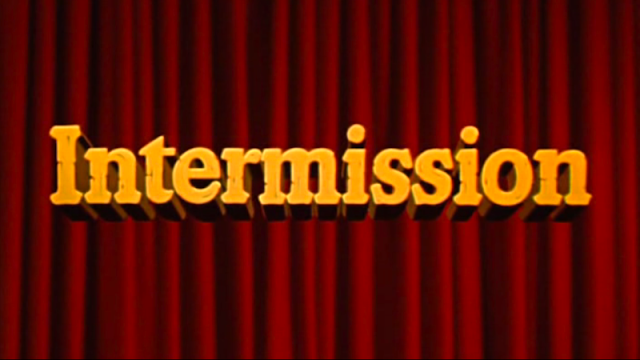 Curiously for a 79-minute film, there's an intermission. Refill your popcorn.
Anyway, it’s a good actionful start. The story was again written by Winston Miller. Miller had started penning B Westerns in the 1930s, getting his grounding, and after World War II had blossomed rather, notably contributing largely to the great My Darling Clementine. But he also wrote or co-wrote other good oaters like Station West and Fury at Furnace Creek (both 1948) and he had worked on the excellent Carson City for Randy in ’52. He does a fine job on The Bounty Hunter because it is a whodunnit, or ‘who’s the quarry’ but Miller gives us few clues – and plenty of false leads. We are kept guessing till the very end. Actually, there’s a No Name on the Bullet vibe to it: in the 1959 Audie Murphy picture too (one of Murphy’s best Westerns), a stranger gunman comes to town looking for someone, and the pressure builds as the townsfolk get increasingly paranoid. I’m sure the Universal team that made No Name had seen The Bounty Hunter. They must have done.


The movie was shot in bright Warnercolor (the earlier De Toth/Scott Western had been that process’s first outing) with cinematography by Edwin DuPar, who had started in the silent days and latterly had shot Silver River and Springfield Rifle for Warners. The locations were Red Rock Canyon and the Warner Ranch, i.e. California, which did as stand-ins for the Kansas/Indian Territory setting of the story – were probably more attractive and more ‘Western’. Visually the picture is pleasing.


The cast isn’t bad. Among the hunted-looking townsmen are Howard Petrie (he’s the sheriff) and Ernest Borgnine, the limping hotelier. Harry Antrim (the doctor from Devil’s Doorway) is a suspicious doc and Dub Taylor, often Russell Hayden or Charles Starrett’s sidekick Cannonball, is the equally shady postmaster. I thought Robert Keys (Kansas Pacific, San Antone, Rails into Laramie) was good as the smooth gunman-gambler, another suspicious character. 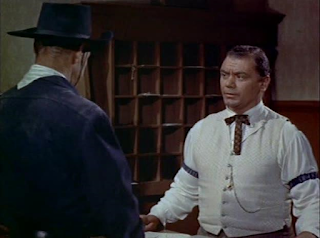 Ernest is the suspicious hotel keeper


There are, naturally, two dames with whom the hero may dally, the prim and proper daughter of the doc (Dolores Dorn in her only Western) and a racier saloon gal (Marie Windsor, leading lady or ‘the other woman’ in a good number of B-Westerns). As to be expected, Randy weds the former in the last scene. 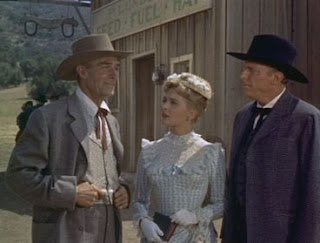 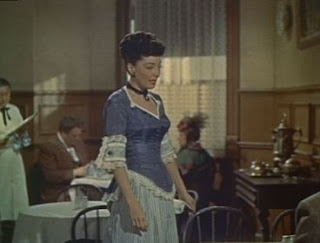 Marie Windsor is the saloon gal
A key regular member of the cast of Scott Westerns is there too, his fancy palomino Stardust. So that’s good.


There’s some good De Toth action, though the fistfight is dealt with in a comic way unusual for the director. The story appears to be set in the 1870s, as so many of these films were, but the pistols look very modern for that.


The Bounty Hunter is no great film of Hollywood history but if you are a fan of good Western movies it’s a must.