Law of the Land (no relation to the 1917 silent movie or the Australian or American 1990s TV series) is a made-for-TV Western movie starring Jim Davis and a young Don Johnson.  It was first aired on NBC in 1976. It isn’t very good. 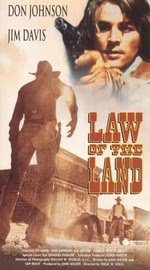 Still, it’s always enjoyable to see Jim and it’s quite amusing to see Don in his mid-twenties, nearly a decade before his decade-defining goings-on in Miami. He’d been the star of the LQ Jones-directed so-called “sci-fi cult classic” A Boy and his Dog the year before but Westernwise he has hardly been a specialist. Being third billed in the psychedelic ‘Western’ Zacariah in 1971, co-star with Mickey Rourke in the contemporary ‘Western’ Harley Davidson and the Marlboro Man, and an appearance in an episode of Kung Fu hardly constitute a Western career. Later he starred in a ‘proper’ Western, the 1995 TV movie In Pursuit of Honor, and of course more recently he was Big Daddy in Django Unchained, but that’s about it. In Law of the Land he plays a charming young rogue who is finally conscripted by Sheriff Jim to wear a deputy’s badge. He’s OK, I guess, despite his 1970s hair. 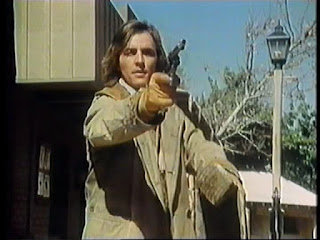 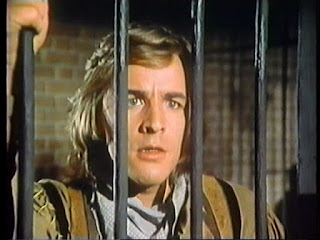 Pre-Dallas Jim Davis made a good tough sheriff. He looks his age a bit (well, he’s entitled, he was born in 1909) but he’s still got the grit. This was his penultimate lead role in a Western (he died in 1981). He’d been a major feature of the genre since 1942, mainly for Republic, and did both good guy and black-hat roles with rangy, slow-speaking aplomb. Later he would be Jock Ewing on TV and all through his career TV had been important (in the mid-1950s he was of course railroad detective Matt Clark, capturing every Western outlaw there ever was on Stories of the Century). In Law of the Land, he’s a lawman who has no truck with weakness or criminality and one look at his craggy face and silver hair will tell you that. 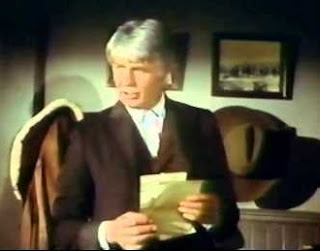 He has a whole team of deputies, even before Don joins up. There’s the capable Arapaho Tom Condor (Cat Bellini, who’d had a smallish part in Little Big Man but didn’t really do Westerns), the equally loyal Brad (Nicholas Hammond, Friedrich in The Sound of Music, not exactly a qualification), the young hopeful Dudley whom Jim treats as a general factotum (toothy Charles Martin Smith, The Toad in American Graffiti, later to be in The Spikes Gang, Pat Garrett & Billy the Kid and The Culpepper Cattle Co.) and lead deputy, the sheriff’s pal Andy (Glenn Corbett in his last Western, fittingly a TV show for he had spent most of his Western career on the small screen). Andy is shot, though, so is written out after a reel or two. If TV movies have reels.


Well, it’s all rather predictable and unremarkable, I fear, and you won’t miss much if you never see it. Still, Jim is good and there is a train (and even a turntable). There’s a typewriter (invented in the 1860s, apparently) and I do like Victorian gadgets in Westerns. There’s also a consumptive dentist (consumptive dentists seemed to populate the West quite densely). You could watch it.