I must admit that, being a child in the 50s and 60s, I tend to think of Fred MacMurray as the patriarch Steve Douglas on ABC’s My Three Sons, and if I think of him on the big screen at all, it’s opposite Barbara Stanwyck in Double Indemnity. Either that or inventing flubber. But he did in fact do quite a few Westerns, starting with his lead role in Paramount’s The Texas Rangers in 1936 and including The Moonlighter (again with Stanwyck) in 1953, and of course he was Lewis to Charlton Heston’s Clark in The Far Horizons in 1955. He wasn’t bad. He rode surprisingly well and had a certain toughness about him, though his menacing walk-down was spoiled by a slightly splay-footed gait. 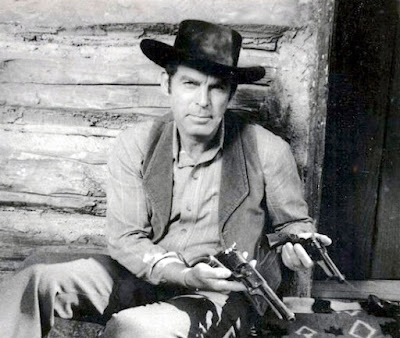 Fred handles sixguns
Gun for a Coward is a big, rather sprawling CinemaScope Universal Western of the late 50s, with all that that implies. It was directed by Abner Biberman, who later became known as a leading director of TV Westerns, notably The Virginian. As an actor Biberman had had small parts in classy Westerns such as Viva Zapata! and Winchester ’73, so he must have known something about the genre, though Gun for a Coward was, as far as I know, his only big-screen oater as director. 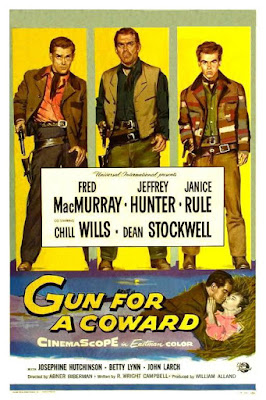 Her three sons
The movie toys with the good old ranchers v. nesters plot and the last reel centers on the equally venerable cattle-drive-to-Abilene plot, but really the film is more of an intense family melodrama that has something in common with Broken Lance, The Furies or The Violent Men, though it lacks the quality of those (Biberman was no Dmytryk, Mann or Maté). Following hard on the hooves of Warners’ The Burning Hills, Gun for a Coward put the accent on young men, with older heads failing to prevail against youthful passion of one kind or another.


It was written by R Wright Campbell, author of PI novels and the first to refer to LA as La-La Land. He wrote another MacMurray Western for Universal the same year, Quantez, but he did mostly TV work. The writing on Gun for a Coward is, well, derivative. Mind, it’s hard to be anything else when writing Westerns: the genre is after all so self-referential. When does an affectionate allusion become a cliché? It’s a tightrope, dudes.


Fred is Will Keough, an elder brother, become the head of the family when daddy died and with a more paternal than fraternal relationship to siblings Bless and Hade. Probably just as well as MacMurray was 50-odd when the film was made while the actors playing his bros were 30 and 20. The idea is that Will is the steady one they all rely on, Bless is the sensitive flower and Hade is the impetuous wild one. Their mother (Josephine Hutchinson) is a rather manipulative woman who smothers and spoils her favorite, Bless. So it’s all set up for intense psychological, not to say Freudian relationships, you know how they do.

The brothers Keough
It’s all made even intenser by one brother falling for another’s fiancée (third-billed Janice Rule, Matt Helm’s partner, in her first Western, later rather good in Alvarez Kelly and Welcome to Hard Times).

Fiancée of one, she falls for the other
The part of sensitive Bless was to have been taken by James Dean, until that accident in the Porsche took a hand, and Jeffrey Hunter was cast, lent out by Fox. Hunter’s big break had of course come the year before with The Searchers, and he was a hot box-office property. He’d also been the Indian Little Dog opposite hero Robert Wagner in Fox’s White Feather in 1955 and one of Raymond Massey-John Brown’s sons in Seven Angry Men the same year. Also in ’57 he was Frank James to Robert Wagner’s Jesse in Fox’s big The True Story of Jesse James, which, however, wasn’t. Later he would be in Sergeant Rutledge and would be Temple Houston on TV. So he had a strong Western pedigree. He’s quite good in Gun for a Coward (of course he’s not a coward at all, it’s all a misunderstanding) but not, I would say, quite at the hauteur the role demanded.

Sensitive son with manipulative ma
The youngest son Hade Keough is played by Dean Stockwell, successfully emerging from popular child star into capable adult actor (and still going strong; I saw him in NCIS the other day – dreadful show but that’s neither here nor there). He’d started Westerns back in 1947 and had had a big part as a small boy in Stars in My Crown in 1950 and Cattle Drive in ’51, both with Joel McCrea. He’s quite good as the tearaway bro, impetuous, rash and hot-headed. He comes to a sticky end though.


Chill Wills is the colorful ranch foreman Loving (maybe a relation to Oliver, who knows), so that’s good. Iron Eyes Cody has a small part as, you guessed, an Indian chief. And Bob Steele gets an habitual bit-part too. I always like to see their faces even if they don’t say much.

Good old Chill
There seem to have been budget constraints because the herd they drive to Abilene consists of about a dozen head and footage obviously from other movies is intercut when we need to see more. There should probably have been less psychological interaction and a bit more action. It does seem to drag a bit. The movie seems long, though in fact comes in at 88 minutes which is far from protracted. Au fond, though, there’s a rather sad message to the film that a non-violent and sensitive man can only really fit in properly in the West by showing his virility in a saloon with gun and fists. Fred, fiancée-less, rides off into the sunset while Jeffrey gallops off at the head of his cowhands to hunt down the rustlers, now a real man.