In 1933, after the six B but not-at-all-bad Westerns the young John Wayne did for Warners, he embarked on the long series of sixteen formulaic oaters released by Monogram under producer Paul Malvern’s Lone Star logo. They were low-budget black & white second features, at under an hour, and they are all very similar indeed. Most were directed by RN Bradbury, Bob Steele’s dad, who had a good eye for locations and a fondness for snappy camera action. They had Duke’s pal Yakima Canutt doing the stunts and often playing the villain or henchman, and they were shot by DP Archie Stout. West of the Divide was the fourth of these. 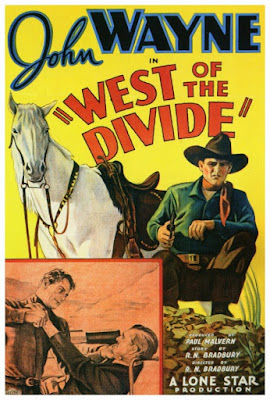 A lot of fun
Monogram was usually where actors ended up, not where they started, but work was work and if you watch the Lone Star Westerns you can see Wayne learning and developing. He is quite physical (in West of the Divide he does a back somersault) and he often did his own fights and horse leaps, though Yak did the hairier stunts. 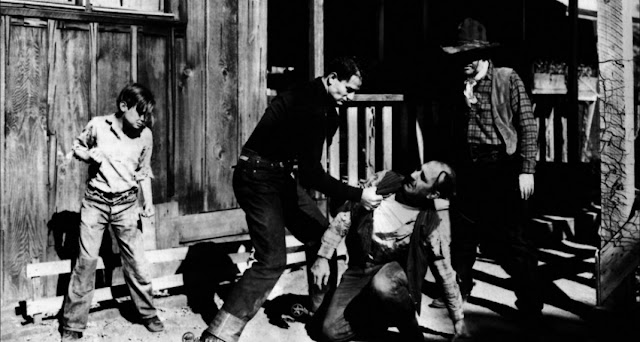 Duke does his own fights
He is sometimes gauche but always winning and sincere, and he is usually the best actor on the set (though fellow cast members were usually has-beens or never-would-bes). Wayne worked on these pictures, building his skills, mastering dialogue, taking and giving cues better. He wasn’t yet the fine actor he would become (those who say John Wayne couldn’t act have obviously never watched Red River or The Searchers) but he was gradually, and modestly, working towards that. In his biography John Wayne: The Life and Legend, Scott Eyman puts it well: Wayne was not a natural actor by any means but he was a natural star. 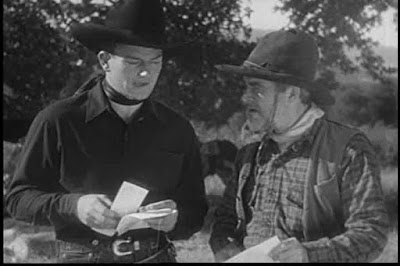 Gabby has no prolific beard yet
West of the Divide is a classic example. Duke’s pal is Gabby Hayes, beardless as yet and billed as George Hayes. Gabby and Duke spend the first reel sitting down telling each other the plot but before too long they move and some action can begin.

It’s the old one about the young man whose farmer dad was killed and who sets out to get his place back and find out who did the dirty deed. We viewers know instantly who the villain was because we immediately see a fellow in a suit with a pencil mustache under his nose (Lloyd Whitlock) so he is obviously the baddy. He wants the whole valley, you know how they do. He has henchmen, naturally, and one of these is Hank (Canutt), so that’s good.

Equally obviously there’s a girl, this time Virginia Faire Brown (aka Virginia Brown Faire, take your pick). She was Tinker Bell in the 1924 silent Peter Pan but she also did a lot of silent and talkie Westerns with the likes of Rex Lease, Hoot Gibson, et al. 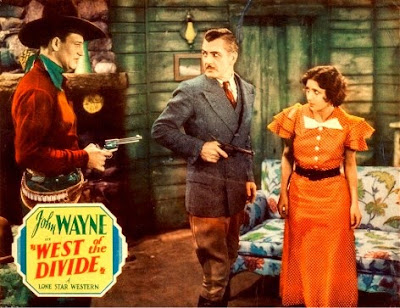 It was never actually difficult to guess who the villain was
The best thing though is that the sheriff is my hero Earl Dwire. Already 50 when this series started, Dwire was a regular, usually as walrus-mustached sheriff but sometimes as bad man. See for example Blue Steel, The Dawn Rider or Randy Rides Alone. In West of the Divide he’s sheriff again and duly restores law ‘n’ order when Duke has defeated the villain.


There’s a young boy (Billie O’Brien) called Spuds whose cruel father beats him and Duke saves him (in a very good stunt) when his buggy horses bolt. It turns out that this lad is really Duke’s kid brother, who also survived the massacre, so we know that the bros will bond and the little one will become a kind of stepson when big John gets the gal. In fact the kid does the proposing and the accepting in the last reel on behalf of his elders. 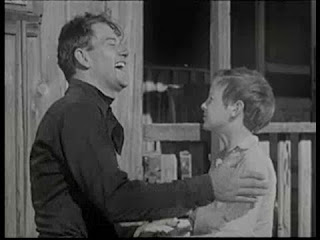 Duke finds his kid brother
The boy equally resourcefully removes the lead bullets from the cartridges of his dad’s gun, so when the baddy in a suit grabs it and shoots at Duke in the climactic scene, Duke is unscathed and able to whop the daylights out of the blighter.


West of the Divide (I’ve no idea why it’s called that) is silly, fun and you could do a lot worse.