The Yellow Mountain is a mid-50s color B-Western from Universal. Starring as it does Lex Barker and Howard Duff, it is a tad on the weak side. 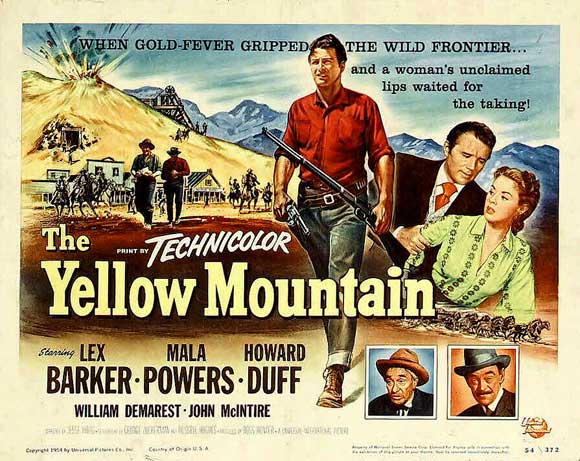 A woman's unclaimed lips waited for the taking, eh?
Mr. Barker was very popular at the time: his last outing as Tarzan had been the year before. But he wasn’t too good in Westerns. He’d had small parts in several before this, had led in the semi-Western Battles of Chief Pontiac in ’52, and had had second billing after Randolph Scott in Thunder over the Plains in ’53, but this was his first starring part in a proper oater. Later he would be Old Shatterhand in those Karl May tales. But he wasn’t really cut out for ridin’ the range. In The Yellow Mountain he is supposed to be Andy Martin, a hard-as-nails adventurer and mining engineer who knocks ultra-heavy Leo Gordon down no fewer than three times in the course of the movie, a rather implausible likelihood. I would have preferred Glenn Ford, say. Robert Mitchum would have been great. But he was busy with Marilyn for Fox on the River of No Return at the time. 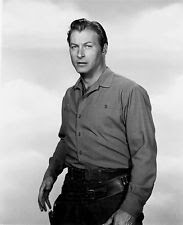 Lex trying to be a tough Westerner
Similarly, Howard Duff, though part of the Hollywood glitterati in the mid-fifties with his then wife Ida Lupino (a superb actor), was never really a top star, and the Westerns he did were routine, or worse. He starred opposite Yvonne De Carlo in the pretty dreadful Calamity Jane and Sam Bass, that kind of thing, and he was Black Jack Ketchum, Desperado in ‘56. The Yellow Mountain was his fourth outing in the saddle (though as a scheming saloon and mine owner in a fancy silk vest he didn’t actually mount up). He does play the part with some pzazz and comes across as a charming-rogue type of guy but I would have preferred, say, Lyle Bettger, who did blond besuited derringer-wielding saloon owners to perfection. 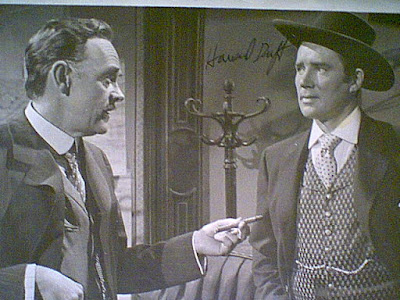 Howard Duff tries to put one over on villain John McIntire. A doomed effort.
The ensemble was directed by experienced Universal hack Jesse Hibbs, and as such it has pace, and it was shot in excellent color in Mojave Desert locations by George Robinson, who had spent most of his time behind a Universal camera (he’d started back in the early 1920s) and had worked for Paramount on The Plainsman. Visually, most of these Universal Westerns of the 1950s were very attractive. The writing (George Zuckerman and Russell S Hughes) is workmanlike rather than inspired, though, and the story a bit on the predictable side. Well, it was a Universal B-Western.


It’s a tale of gold mining in Nevada, with mucho skullduggery going on. The good news is the casting: the arch-villain Bannon, Duff’s rival as saloon and mine owner, is the splendid John McIntire and his chief henchman is the equally fine Leo Gordon. What a pair. And on the good guy’s side there is William Demarest as Jackpot, the cranky old-timer owner of a no-good mine, and the glam Mala Powers, protégée of Ida Lupino and Rose of Cimarron shortly before, is his daughter Nevada, love-interest for first Mr. Duff, then Monsieur Barker. It’s a top-drawer line-up. 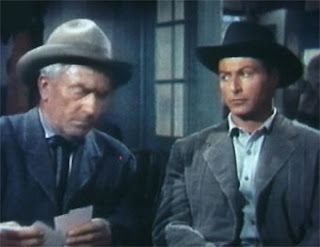 William Demarest is Barker ally Jackpot
Bannon isn’t too far from Gannon, the charismatic villain McIntire played in Universal's The Far Country the same year and I wish the names had been identical. I like to think that James Stewart ’s opponent in Canada had started his crooked ways in Nevada, though as the McIntires are shot to death in the last reel of both movies that would perhaps have created the odd problem of continuity. 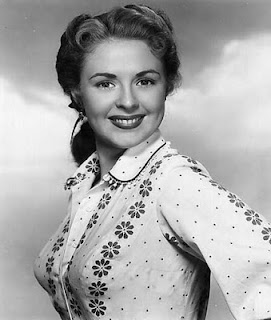 Mala Powers
The many brawls are unconvincingly staged and they needed Yak Canutt or someone good on the stunts (it was Carl Andre in fact).


Kermit Maynard is the (uncredited) bartender and Denver Pyle (equally uncredited) cleans Demarest out at poker in the saloon, so you can have fun spotting great character actors.


Leo wears that short blanket jacket he often sported (actors were often obliged to provide their own costumes and maybe that jacket was Leo’s own). Duff has a pocket pistol which is almost a derringer. So all in all this is quite a fun Western with much to recommend it, though The Far Country it wasn’t. 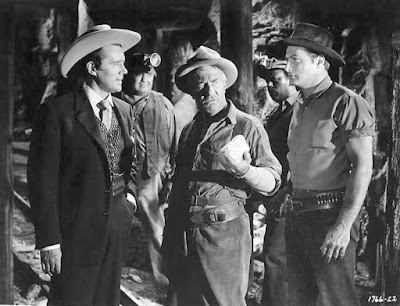