In 1938 John Wayne signed a new contract with Republic. The salary wasn’t bad, eight Westerns at $3000 a picture, quite healthy for the time (though a far cry from what big studios were offering). Republic boss Herbert Yates enticed Wayne with a promise that he would star in a movie about Sam Houston. It was a lie, though, as was often the case: Yates gave the role to Richard Dix. Still, at least Wayne was working, and a decent weekly check was coming in.


He made eight pictures in the Three Mesquiteers series (four each side of Stagecoach) based on the Western novels of William Colt MacDonald. They were very popular movies, and Republic made 51 altogether, between 1936 and ’43.  From 1937 to the end of the series, The Motion Picture Herald consistently ranked the series in its top ten of cinematic Westerns, and they reached a peak of popularity with Wayne in the lead. Bob Livingston starred as the hero Stony Brooke for fifteen movies, 1936 – ’38, but then Yates promoted him, grooming him for stardom (which never really happened) and Wayne took over. 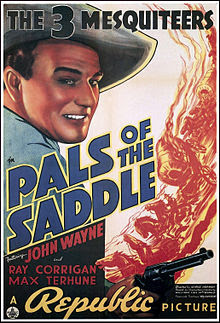 The first of Wayne's eight Three Mesquiteers pictures
As for the other two Mesquiteers, for all the pictures up to and including the 24th in 1939 and including all the ones Wayne was in, Ray Corrigan played the two-gunned Tucson Smith, while Max Terhune, with his ventriloquist’s dummy Elmer, was Lullaby Joslin for the first six of Wayne’s efforts, giving way to Raymond Hatton for the last two. 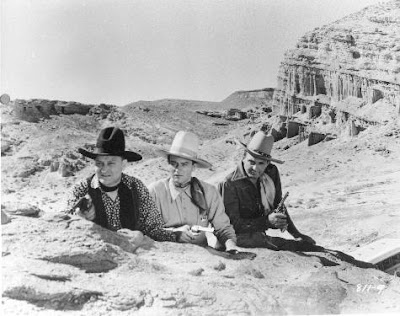 Terhune (sans Elmer), Wayne, Corrigan
The pictures were a juvenile serial, really, and very formulaic. Like many of the Westerns of the era, they were set in semi-modern times (the latter pictures had the pals fighting Nazis). Cars and planes appear, the villains and the dame wear contemporary (i.e. 1930s) dress, yet the pals ride the range in spurs and Stetsons with sixguns on their hips. Pals of the Saddle is (vaguely) set during some post-1938 world war, at least one assumes so, and has a plot about a crooked scheme to mine the poison gas ‘monium’ and ship it out of the USA for use by (unnamed) European powers. Naturally, the pals foil the evil machinations. Children must have enjoyed it.


The early part of the story is set on a dude ranch where pretty secret agent Ann Cameron (Doreen McKay, who would also be in Night Riders) is trying to foil the skullduggery of ‘Judge Hastings’, a villain (Josef Forte). Stony is recruited and pretends to be dead to elude pursuit. His pals are mortified to hear of his demise but the two of them (three if you count Elmer) soon find Stony has being playing possum and back him up in his efforts to thwart the villains. The US Cavalry arrives at the last minute, in time-honored fashion, and saves the day. 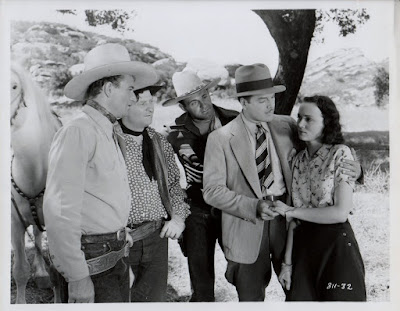 Mesquiteering away
Yakima Canutt is a henchman and was in charge of the stunts (quite a bit of leaping from one wagon horse to the next).


To be fair, Pals of the Saddle, directed by good old George Sherman, is one of the better Three Mesquiteers pictures and you could (just about) devote 55 minutes of your time to it but I don’t think anyone would lay claims to greatness for the film.


Overland Stage Raiders came next. Bet you can’t wait to read the review of that one, so click the link, e-pards.