Overland Stage Raiders was the second of the eight Three Mesquiteers pictures that John Wayne starred in for Republic, 1938 – 39, following hard on the hooves of Pals of the Saddle. Shot in ten days in August ’38 and released in September, it was the mixture much as before, a 55-minute second feature directed by George Sherman and starring as the other Mesquiteers Ray ‘Crash’ Corrigan and Max Terhune (with Elmer) as alleged comic relief. It has a very similar plot: skullduggery is thwarted by the heroic pals. 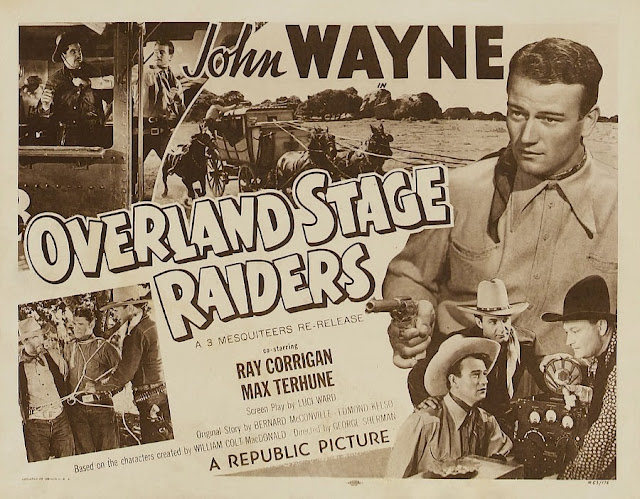 In the poster there's an actual stagecoach. The artist clearly hadn't seen the movie.
There is a lot of action, to keep the infantile audience quiet, but also a lot of talking on clunky sound stages as the actors tell each other the plot.


It has the same contemporary-yet-Wild West setting, with the Stetsoned and spurred pals riding the range with sixguns on their hips, yet cars and planes figuring and the rest of the cast in modern (1930s) dress (the chief villain always in a suit). It’s odd, but you get used to it. In fact the internal combustion engine is central to the plot of this one: while we are used in Westerns to plots about stage lines being put out of business by the railroads, in this one the robbed stage in question is a bus and it is replaced by an air service. 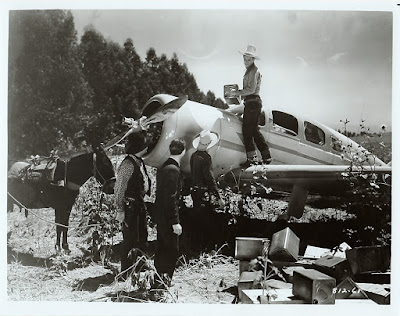 Duke refuels the stage
The new aerial stage is also raided, and the bad guys force the passengers to parachute out, which is a new twist, I suppose.


Yakima Canutt drove the bus and managed the horse stunts. Republic specialized in horse chases (they offered a bottle of bourbon to the fastest rider) and there are several exciting episodes in Overland Stage Raiders, such as the recapture of a hijacked train. Sadly, though, the movie is notable for a chillingly profligate use of the Running W, the trip wire that brought horse and rider down in a tumbling heap with results always painful and sometimes fatal to the horse. 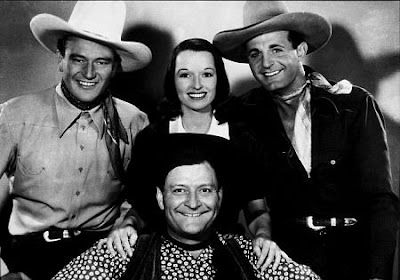 
Two men looked around, saw me and came to greet me. One was a cherub, five feet tall, carrying a bound script; the other was a cowboy, six feet four inches tall, wearing a lovely smile. The cherub, who was the director, George Sherman, introduced me to the cowboy, who was John Wayne. … Looking up at him, I thought, this is no actor but the hero of all mythology miraculously brought to life. … John was, in fact, that which Henry James defined as the greatest of all works of art – a purely beautiful being.